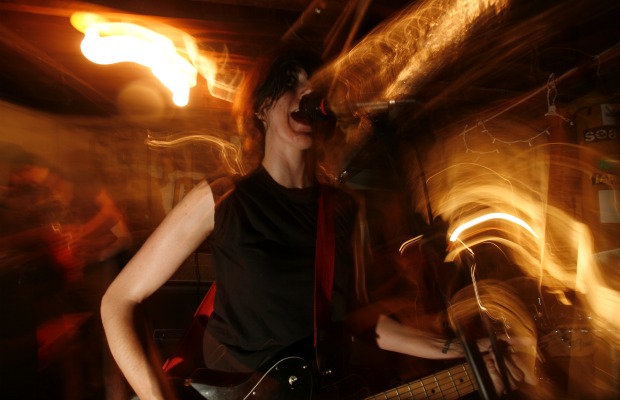 While women standing in front of the stage is certainly nothing out of the ordinary, instances of women performing on the stage are not nearly as common. Enter Are You With The Band?, a compilation of female-fronted pop-punk bands curated by LAUREN DENITZIO, formerly of the Measure [sa] and currently of Worriers. The Paper + Plastick-released collection was released on Oct. 4, and all proceeds from the release are being donated to Planned Parenthood. Denitzio talked to AP about curating the comp and the state of women in the scene in 2011.
Interview By: Amber Wade

How exactly did you get started in music?
LAUREN DENITZIO: Seven years ago, the Measure started based on similar music tastes [of the members], but just as a very casual [endeavor]. It was not supposed to be anything lasting more than a summer. Then we kind of realized that we really enjoyed playing music; we really got along with each other and thought it was going well. We kept it going, and it turned into seven years, and a lot of records and touring.

Before that, all through high school, [I] went to local shows in central New Jersey, close to New Brunswick. [I] was always involved with booking shows and putting stuff like that together; that had always been a big part of my life growing up as well. But then [I] got much more into it and much more involved in New Brunswick once the Measure started happening. Through that I ended up meeting people like Vinnie [Fiorello] from Paper + Plastick, who is putting out the record, and that’s how I met my newer bandmates who are now in Worriers with me.

How did the idea for the compilation of female-fronted pop-punk bands come together?
Vinnie approached me about the idea to put out a comp with that theme, based on him wanting to put something out, but also knowing that I’m involved in a feminist collective [and that] a lot of my female friends are in pop-punk bands. It’s something I’m interested in, so he thought I would be an appropriate person to curate a record like that—[to] take the ball and run with it, so to speak. That’s how that part came about, but it was definitely him approaching me with the idea, then me coordinating everything else.

What would you say the bands each bring to the comp?
I’m really happy with the fact that even though it definitely is a pop-punk comp, not all the bands sound alike at all. They really bring a wide range of sound, a wide range to the genre. There are bands that chose to be more political about it; there are others that didn’t. There are bands that wanted their artwork to represent a certain thing about them; there were bands that were less concerned with that. It also [includes] a pretty good range of bands. Maybe someone would pick up the comp and say, “Oh, I know half of these, but I don‘t know the other half. I‘m going to go look into them and the other bands they usually play with.” I think it will open up a lot of different scenes, a lot of different areas of music that may not have been heard by people who follow Paper + Plastick and by people who follow any one specific band on the comp. The diversity of the comp is pretty special to me. Hopefully, [it] will work in everyone’s favor.

How long did it take to put this all together?
It took probably about six months to get it all together, from creating the list of bands that I wanted to ask, the list of artists I thought would be appropriate. A lot of bands either had songs they hadn’t released anywhere else or they had to go record something, so we gave bands and artists a good chunk of time to work together on what they wanted to contribute. It definitely took a while; it didn’t happen overnight. It’s coming out a year later, but I guess it was a labor of love, and I’m really glad to be a part of it.

How do you feel about how women are viewed in this particular music scene?
I think it varies from place to place; I think it varies from scene to scene. I don’t think I can make a general statement how all women are treated in that sense. But from being in a band for a decent chunk of my life—and playing lots of different types of places, lots of different types of venues—it still isn’t as normal as people try to make it out to be. I think people definitely have treated me differently [and] have treated my other female friends differently. Any band I’m in will still get compared to the same few female-fronted pop-punk bands, and I don’t think [women in pop-punk] is as recognized as some people would like to say that it is. I live in Brooklyn now, and the scene around here is really diverse; there’s definitely not a lack of women in the scene at all. But in other places, that’s not the case, and I think it’s really easy to take that for granted when you live in a big city. I feel like there’s definitely still a ways to go. I still encounter sexist things at shows all the time, but it’s not like it’s horrible. I’m a part of the scene because I love it, and because I do feel welcome and I do feel accepted. But nothing’s perfect and you do nothing else if not try to make it better.

For women or girls who are part of music scenes that might be less welcoming or where there is less diversity, what advice might you have for them to become more equal participants in the scene?
For me, it was all about never feeling like I was any less capable. You know, even if you’re not a master shredder at guitar, you find people who want to play music with you, who like the same bands [and] go to the same shows. Just don’t think of it as a thing. For a long time, for the first few years of being in a band, it never really occurred to me—or I didn’t let it stop me—that I was one of the only women in bands at the shows we would play. I didn’t let that stop me from wanting to be in a band or from wanting to continue. I don’t know how to tell someone how to have confidence, but it’s really about not worrying about what other people think, not worrying about what other people are going say and the judgments you will get being on stage, being a woman, being the girl. You kind of have to let that stuff roll off your back.

What role would you say that men have in making women equal partners in their scenes?
Even Vinnie approaching me and saying, “I have this record label; I have these resources. Let’s do this comp together” [is doing that]. It’s making an effort to consider the gender makeup of your band. I definitely know a lot of guys who specifically want to make sure they’re not only thinking about their guy friends, they’re considering everyone. I think it’s about listening and wanting to have that conversation and, you know, asking other people in your life, “What would make you feel more welcome here?” or “What can I do to help? I know you really want to start a band; I know you really want to start a label.” If you know how to do certain things, if you feel like you have more resources than someone else, [it’s important to be] actively trying to share that, not in a patronizing way and not in a condescending way. If you want to make your scene less sexist or more welcoming to women—or more welcoming to anyone, really; I don’t think it’s just about gender—I definitely think it’s about listening to what people’s concerns are and understanding that if you have the upper hand in some situations, whoever you are, to be aware of that. It’s about being conscious of the privilege that you have, whether it’s gender, race or class.

Anything else you think people should know about the comp?
I’m excited to have people check out the comp. I think it’s really solid music from really solid bands who all happen to be female-fronted. I think that it stands on its own in that way. There’s money going to a really good cause, and it’s also opening a whole bunch of different scenes and a bunch of different bands that I’m really excited to have people hear. [And] as much as I’m being interviewed for details about the comp, it’s a comp—and in a sense, definitely a collective effort. I’m really proud to have gotten to work with everyone involved on the comp. It’s not just me, at all. alt