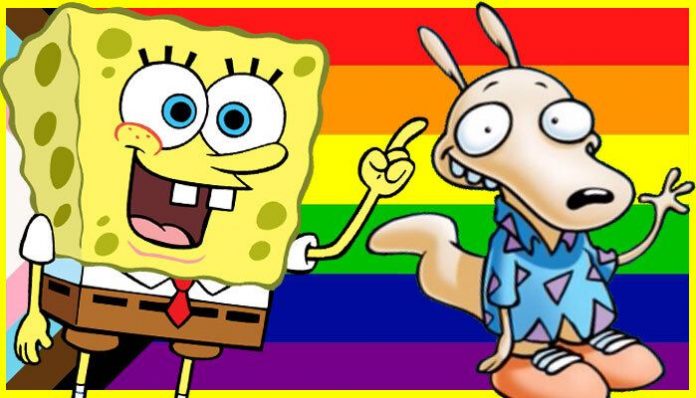 In the past decade, representation in children’s shows, particularly for those who identify as LGBTQ+, has greatly increased.

Back in the 2000s, it seemed like animated or children’s TV characters were only suspected to be gay. Unfortunately, those storylines never played out on screen so that kids would be able to see more diverse identities reflected in their own shows and hopefully become more knowledgeable.

But now, some TV executives are being more inclusive to better reflect the world we live in. In honor of this, we rounded up 10 ways children’s shows are supporting the LGBTQ+ community in hopes that this list only grows in the future. You can check those out below.

Celebrating #Pride with the LGBTQ+ community and their allies this month and every month 🌈 ⁣
(🎨: by @ramzymasri) pic.twitter.com/pENmTaQB0h

In June, Nickelodeon celebrated Pride Month by revealing everyone’s favorite sponge under the sea is part of the LGBTQIA+ family. When the network made their Pride post, everyone assumed that SpongeBob was gay. However, late creator Stephen Hillenburg had previously said that he is asexual.

Last year, the internet went insane when Arthur’s teacher, Mr. Ratburn, got married to another man on the show. While the word “gay” wasn’t used, it showed both Arthur’s young characters and children who were watching that just because someone is getting married doesn’t mean it has to be to someone of the opposite sex.

On our street, we accept all, we love all, and we respect all. Happy #PrideMonth! pic.twitter.com/BkRMJyzzfL

Sesame Street has remained a vocal supporter of the LGBTQ+ community, outside from writer Mark Saltzman revealing that Bert and Ernie were written as a gay couple. The show has tweeted for Pride month, and it’s featured kids with same-sex parents. Additionally, on spinoff The Not-Too-Late Show With Elmo, Elmo has interviewed people in the LGBTQ+ community, including Lil Nas X.

This show has won a GLAAD Media Award for its work in LGBTQ+ representation in children’s programming. In 2018, the show featured a nonbinary wedding between Ruby and Sapphire and explores many themes outside of heterosexual relationships.

In 2019, this ’90s classic dropped a reboot special that took place 20 years in the future and featured a character who identified as transgender. In Rocko’s Modern Life: Static Cling, Rachel comes out to Rocko as a trans woman, and she has become the owner of an ice cream truck business.

Read more: Pixar is releasing its first project with a gay lead character

Good Luck Charlie was the first-ever Disney Channel show to feature a same-sex couple on screen back in 2014. The episode featured Susan and Cheryl, who were the moms to a kid who came over to play with Charlie.

After Adventure Time fans spent episodes speculating that Princess Bubblegum and Marceline were a couple, the two finally kissed during the series finale in 2018. Creator Pendleton Ward also confirmed they had a previous off-screen relationship, giving fans the satisfaction they were looking for.

Sheriff Blubs and Deputy Durland were another couple who TV fans were shipping together until the 2016 series finale finally confirmed it. The two cops hugged one another and proclaimed their love after the series hinted at the relationship.

In the final season of My Little Pony: Friendship Is Magic, Aunt Holiday and Auntie Lofty, a lesbian couple, become the occasional guardians of Scootaloo while her parents are gone, which coincided with last year’s Pride Month.

While Good Luck Charlie was the first Disney show to feature an LGBTQ+ couple on screen, Andi Mack was the first show with a main character who was explicitly gay. Cyrus Goodman came out in a 2017 episode. In the series finale, we see him holding hands with TJ, his longtime crush, insinuating they might develop a relationship.