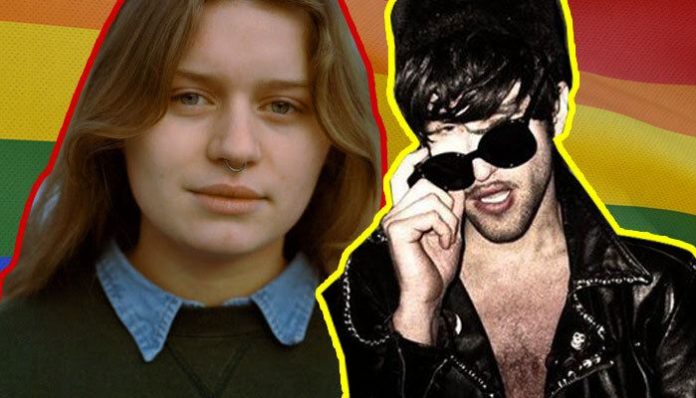 Alternative music genres that are distinctly queer and LGBTQIA+-oriented aren’t easily discoverable without the help of word of mouth. As platforms such as Instagram, TikTok and Twitter continue to showcase bands who promote individuality and unapologetic expressions of gender and sexuality, LGBTQIA+ musicians continue to grow at a rapid pace.

Typically, alternative genres such as punk, emo, pop punk and more are fronted by heterosexual white men. LGBTQIA+ bands are actively challenging the preexisting boys’ club of the alternative music scene and redefining what it means to be a part of it. While queercore has been around for nearly 40 years, it wasn’t until recently that it has been given the attention it deserves. With that in mind, here are 11 LGBTQIA+ bands to listen to immediately.

The duo of Avery Tucker and Harmony Tividad make up the alternative queer act Girlpool. As they’ve continued to grow as a band, they have consistently maintained lyrics that depict their own experiences with their gender identity and sexuality, such as “123.” The line “While the moth doesn’t talk but in the dress the holes you saw” is particularly telling, representing the questioning of gender performance. Girlpool actively support their community by donating merchandise revenue and uphold the standard that the LGBTQIA+ music scene is, by and large, a family.

Kelsie Hogue, who performs under the name Sir Babygirl, is a nonbinary and bisexual indie-pop musician. Their music speaks to the queer experience that is often missing from the lyrical rhetoric of mainstream pop, rock and alternative music. Sir Babygirl’s music strives to offer their community what they lacked growing up. With songs such as “Cheerleader” depicting feelings of forbidden love they experienced as a young LGBTQIA+ individual, Sir Babygirl establishes themself as a force to be reckoned with as they give a joyful pop styling to relatable experiences for other nonbinary and bisexual people.

Canadian rock band Partner aren’t afraid for anyone to know how queer they are. Songs such as “Play The Field” and “The ‘Ellen’ Page” outwardly state that both Josée Caron and Lucy Niles are unapologetic lesbians with desires that many can relate to. With punchy lyrics and a true rock styling, Partner give a witty twist to the common song about having a crush and a sarcastic attitude to their music that doesn’t take itself too seriously.

The debut album from Aye Nako, Silver Haze, combines pop-punk melodies with squalling vocals that resonate throughout its entirety. Their powerful lyrics are just as personal as they are political as Jade Payne vocalizes what it means to be queer, trans and black with punk and pop stylings. The punk community has historically pushed aside black and queer bodies. As a response, Aye Nako make their presence known in the scene and ensure their listeners that they’re not alone in their struggles to exist without prejudice.

Hunx & His Punx’s queercore and punk sounds resemble a rockabilly sensibility with an overtly queer presence. With lyrics such as “I wish I woulda kiss him one last time” in “Lovers Lane,” they establish their tone as an LGBTQIA+ band who detail the concepts of love and longing. While their lineup has shifted throughout the years, Hunx & His Punx have maintained their identity as a true queercore band. For over 10 years, they’ve provided their community with songs that are both self-reflective and deeply personal.

From the basement to the main stage, Screaming Females are a noteworthy mention in the history of LGBTQIA+ bands. As the band have grown into their punk sound, they’ve also reconciled with their queerness and have embraced it in their music. Since 2005, Screaming Females have actively sought further representation of LGBTQIA+ musicians in the punk community, and they don’t show any signs of slowing down. With an experimental sound mixed with classic punk chords and guitar riffs that can leave the listener in a trance, they undoubtedly deserve to be listened to on repeat.

Last year’s Dykes To Watch Out For put DUMP HIM on the map of LGBTQIA+ bands who are making major waves. Their sound takes inspiration from classic punk mixed with queercore sounds that are all their own. The titular track on their 2019 album is an unabashed statement of refusing to abide by the norm of heterosexuality and gender performance. Additionally, their lyrics tackle the struggles of constant microaggressions toward their gender identity and finding self-acceptance. DUMP HIM are a tour de force of what it means to be a queercore band in the 21st century.

Read more: 10 reasons ‘Transgender Dysphoria Blues’ is the best Against Me! album

Fab The Duo are composed of a gay couple, Greg Driscoll and Brendan Eprile, who challenge the notion of who pop, blues and rock belong to. By bringing together elements that span an array of genres, the two create an unapologetically queer celebration of LGBTQIA+ love and light. With a powerful message and extraordinary talent, Fab The Duo are a group who shouldn’t be overlooked. The presence of the black, queer and interracial couple is changing the way musicians can utilize their platform as activism.

girl in red has experienced a wave of immense popularity on TikTok. Fronted by Marie Ulven Ringheim, she’s known for her lyrics that depict queer love and mental illness in the LGBTQIA+ community. She has quickly become a queer icon that fans of all ages enjoy. With a dream-pop-infused indie sound, girl in red isn’t afraid to tell the world that she is queer, opening the door for fellow musicians and listeners to explore their own sexuality through her thought-provoking lyrics.

Read more: 10 essential LGBTQ+ books to add to your collection

Dazey And The Scouts

Dazey And The Scouts debuted their first album, Maggot, in 2017. With songs such as “Sweet Cis Teen” and “James Deen You Let Us Down,” the band explore their LGBTQIA+ identities with soft singing and queercore instrumentals. They’re unapologetically honest in their lyrics and explore a plethora of experiences in the queer community. Above all, Dazey And The Scouts utilize their platform to highlight the shared experiences that LGBTQIA+ teens and young adults encounter throughout their lives.

She/Her/hers aren’t afraid to call out the heteropatriarchy of the punk scene. “Kill The Boy Band” features lyrics such as, “So you started a band?/Well, let me guess who’s in it/All-straight all-white able-bodied cis men,” which actively call out the lack of queer representation in music and, more specifically, the alternative community. The band embrace a pop-punk sound mixed with jazz instrumentation to get their important message across to a broader audience. She/Her/hers have only just started, and their trajectory toward becoming an iconic LGBTQIA+ band is imminent.