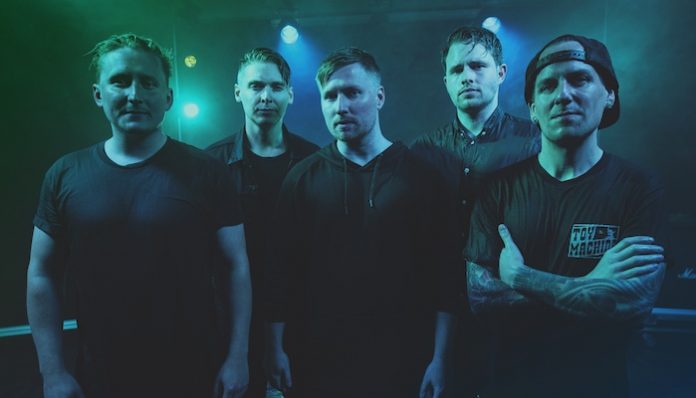 When Swedish band Like Torches came into our consciousness in 2013, they had thankfully changed their original name (You Ate My Dog) and released their self-funded album, Keep Your Head High, delivering a European take on pop punk. When they toured America with Yellowcard, they struck up a friendship with founder William Ryan Key, resulting in the making of a pop-punk bromance. Key ended up producing their 2016 follow-up release, Shelter, emphasizing the band’s melodic flair.

Today, Like Torches—vocalist Jonathan Karn, guitarists Daniel Karn and Erik Thyr, bassist Zakarias Faleij and drummer Jimmy Brunkvist—have their new album, Loves And Losses, released on Victory Records. Not entirely a pop-punk pit party people may be expecting, the record—with Key once again in the producer’s chair—finds the band switching up things significantly.

While there are some caffeinated moments at play (“Live On”), there are also moments where Like Torches mix things up for some streetwise swagger (“Get A Life”), potential alt-rock anthems (“Firefly,” “We Will Be Gone,” the title track) and a few (“Damned And Reckless,” “Silver Lines”) that go from quiet, heartfelt sentiment to accelerated amps-on-stun roaring.

Frontman Karn spoke with AltPress through the beauty of fiber optics to discuss the making of the record, their growth as songwriters and whether or not Key is a band’s best life coach.

The growth between Keep Your Head High and Loves And Losses is really admirable. You didn’t completely ditch the pop-punk sound you had happening six years ago, but you expounded on the possibilities. When you’re writing, does a member bring in a finished song and then you all work with it?

We experimented a lot with all the songs. I think for this record, we wrote 25 demos, probably. Everyone writes their own stuff: Most of them are ideas my brother Daniel writes, like the main basics of the song, or Eric, our other guitar player. Then we would try it out in the rehearsal space and record, and then we shoot our ideas to Ryan. We decided before we went to Nashville to record the record, [we weren’t finishing] all the demos before going into the studio because we wanted to sit in the studio and try different things. Like switching out a whole verse or changing a whole chorus for a song in the studio. Nothing was done until after recording that month in Nashville. We really changed a lot [of songs] in the process.

You’ve done most of your records with Ryan Key. At this point in the life of Like Torches, what is your dynamic with him? Is he a friend, mentor or consultant?

It was pretty special writing this record. We became friends early on, touring together and sharing a tour bus. Ryan actually books trips to Stockholm every now and then just to hang out and visit bars and clubs. When he’s here, we’re always showing each other demos and talking about the stuff [both of us] are working on. I don’t know. It’s a friendship, for sure. But he’s also giving us a lot of help. For this record, we actually flew him to Sweden, and he stayed here for two weeks just to record demos and write stuff together.

So he can say things to you like, “Oh no, that’s terrible. Don’t do that” in the studio and nobody’s upset?

[Laughs.] There have been times when I’ve written lyrics for a whole song, and then when we sit down with the band, Ryan will be like, “Yeah, no. I don’t think this is going to fly.” And I was like, “OK, forget it. Let’s start from scratch.” [Laughs.] Yeah, for sure.

We wanted to be able to sit in the studio and experiment. Ryan has a studio in his house in Nashville, and that was really great because we could just be there all day, all night and try out different things. Everyone came up with different ideas—and not just Ryan. We could put out a new record next week or in a month.

The previous records were full-on pop punk, whereas this one has more directions. Does that say something about where the members of Like Torches are right now, or is it a response to what’s currently happening in the music scene?

We’re pretty unaffected by what people want us to do or what kind of music people would like us to do. We’re inspired by the stuff that we’re listening to right now. And every time we write, we just do it for ourselves. I think people are growing up more. For me, stuff like Manchester Orchestra [inspires me]. I’m listening to a lot of Thrice—more rockier bands these days.

Bands who started out one way have grown into something different that still inspires them. Are there elements of your band’s early days that you would like to retain?

We all like the fast stuff: songs like “The Guilt Of Surviving” and “Silver Lines.” This time, we were super-inspired by the [2016] Jimmy Eat World record, Integrity Blues. We loved the sound of that, so we tried to have some fun songs, but let’s try to make them more rocky.

Sounds good. Do you have plans to come to the states?

We’ve been talking about this a lot. We really want to. We’re looking for a good opportunity to go back to the states. And the best thing for us would be getting on a good support slot. But that’s not super-easy. We want to get back as soon as possible, but we’re a Swedish band, and we have to get visa stuff to apply to states. So we want to make sure to make it worth it.

Absolutely. Last question: What was the greatest piece of advice Ryan Key ever gave you?

Does that apply to everything?

Not always, but [it’s] something that comes up when we’re writing songs. [Laughs.] We have to pause and be like, “Hey guys, what is this? We need to stop doing too much and think about what’s important—and fun.” A good lesson, I guess.

Like Torches’ Loves And Losses is available now via Victory here. The band also just dropped a new video for “Silver Lines,” which you can check out below.