Back in September, the ILoveMakonnen-produced posthumous collaboration between Lil Peep and XXXTentacion, “Falling Down,” hit the internet. The track was later rereleased with ILoveMakonnen’s verse as “Sunlight On Your Skin,” but this would certainly not be the last time fans would hear these two team up in this way.

Now, in a dream collab for both fans and the rappers themselves, Fall Out Boy contributed to “I’ve Been Waiting,” a single so summery, you might just forget the current single digit temperatures throughout much of the country.

ILoveMakonnen and Peep joined forces in Los Angeles and then London in July 2017, four months prior to the latter’s untimely passing at the age of 21. This time period was mentioned in Peep’s posthumous “Runaway” video, and it was there that they began work on an album. Makonnen shared the new track’s beginning stages, asking Peep if he could add his side, and “he started writing right there on the spot,” Makonnen reveals.

Once they got the track’s structure, the duo began discussing who some of their influences are, a conversation that would later lead to the perfect opportunity.

“We were talking about all of the artists that influenced us and who would be our dream artists to work with,” ILoveMakonnen explains. “He mentioned Fall Out Boy, and after Lil Peep passed, Pete Wentz reached out to me and sent his condolences.”

Wentz also asked if there was anything either he or the band could do, which opened the door for Makonnen to send them the track that was in the works.

“I was like, ‘Oh well, I would be honored if you guys could check out this track. Lil Peep and I were both really big fans, and he’s been quoted in interviews saying that his style is like ILoveMakonnen and Fall Out Boy, so it would be really great if you guys could take a look at this and maybe do something for it.’ They loved the track, and they added some great elements to it. We made it into a very special record, and I think Lil Peep would definitely be proud of what we turned it into.”

While Fall Out Boy’s later involvement makes sense, Makonnen says they were always envisioning a rock band to add that extra layer to the pop-rock-meets-alternative track.

“We wanted to make it sound like, I wouldn’t say a rock song, but we were thinking band,” he explains. “All of the music we were doing is very cross-genre stuff, so we wanted to be able to make songs that could fit in any genre.

“Once Pete Wentz reached out to me, I was like, ‘Wow, this is like the universe lining stuff up.’ This is what Lil Peep and me always wanted, so it just kind of happened.”

While Peep had been vocal about his interest in emo and alternative through interviews and sample choices, Makonnen is also very into the genre, citing FOB, the Killers and Bloc Party as some of his favorites.

“I’ve always looked up to [Fall Out Boy] because they’re like MTV royalty from me as a child when I would look at videos. The same with Lil Peep. He would talk about the impact of Fall Out Boy on his music.”

While many fans know Makonnen for his trap-meets-bedroom-pop style, the band’s alternative influence came through in the collab.

“This is a space I’ve always wanted to try to get it to and have always wanted to be in,” he explains. “Bands have a cohesive type of relationship onstage and bring it all together like that. With this, that’s what we were doing all with different artists. For me and Lil Peep, it was joining together to make a new style or band to form together.” 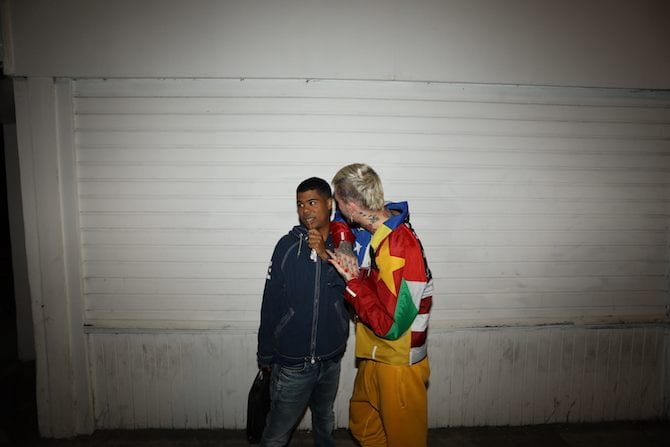 This wasn’t the only new approach, however, as Makonnen finally came out of his shell.

“The biggest [difference is] I’m not as shy,” he says with a laugh. “Usually I would never put something like this out, and Lil Peep helped me to get confidence in the style and go for it. It’s something brand new that fans haven’t heard before from all three of us. They probably knew that we were very capable of doing different things, but I feel like it’s a good blend.”

Fans can expect this new sound to be applied to future ILoveMakonnen material as he tries to capture more of that good energy.

“I think this is some of the happiest music I’ve been a part of,” he says. “It has a feel-good energy to it, and Lil Peep was definitely very happy with it. It was just all smiles all the time in the studio. This record and the vibe of it always bring me back to good energy and happy vibes.”

This also isn’t the first time the rapper has worked with Fall Out Boy, having remixed “Favorite Record” for 2015’s Make America Psycho Again, a remix compilation of their sixth full-length, American Beauty/American Psycho.

“We’ve had a working relationship, and this was the first time where we were able to end up making a video together and really being able to hopefully perform it numerous times around the world,” he explains. “It’s just an honor as an artist to be able to work with an artist of that caliber.”

The video is still in the works with Makonnen having shot some of his scenes this week, but he hopes for it to hit Spotify as a vertical video by March. The rapper is also planning to share more of the music he made with Peep by the end of the year.

“We’re definitely going to get this album out before year’s end, and I’m just going to keep putting out music, [and] we’re just going to keep giving the fans what they want,” he says. “I think they’re definitely overdue for this music that me and Lil Peep made, and I think it will be the right time, and I hope everyone enjoys it, and it helps bring them closure and happiness.”

Check out “I’ve Been Waiting” here or below.