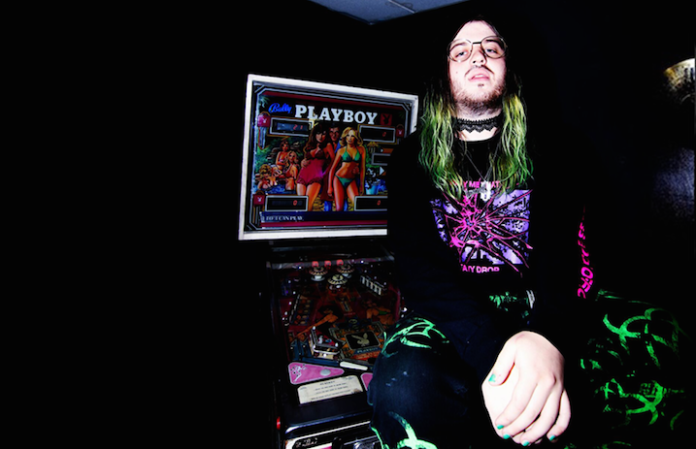 Sure, until a few months ago, the young rapper and songwriter was best known for dropping a well-received EP, Gloing Pain$, and spending his summer touring and collaborating with Blackbear, an artist whose credits include co-writing the Justin Bieber hit “Boyfriend.” He was just another up-and-comer with a dream, talent and some famous friends.

But a series of SoundCloud tracks dropped over the last two months have set the internet buzzing—and turned Lil Aaron into a lightning rod within the scene. Tracks like the Paramore-sampling, Millionaires-referencing “Warped Tour” (“I got bands like I’m Warped Tour”) and “Lit,” which finds him boasting, “Yeah I’m lit, yeah I’m lit” over the top of a looped guitar line by early-’00s pop punks (yeah, you guessed it) Lit, seem custom-designed to tweak those who respond loudest to such tweaking.

“Pop punk meets trap” is how Lil Aaron describes it: “trap drums, 808s, big fucking pop-punk rock hooks.” It’s a mix that actually plays out more seamlessly on record than it sounds like it should: not at all disjointed, successfully harnessing the buoyant grooves of the sample sources and pairing them with playful braggadocio. But when it comes to Lil Aaron’s critics, the sonic qualities of his tracks and the structure of his bars seems largely irrelevant. It’s the act itself, not the execution, that offends. “A couple of the old heads in what we would call ‘the scene’ think what I’m doing is disrespectful,” he concedes, “especially with the samples. But I’m sampling songs from 10-ish years ago. When does it become free rein? I feel like I’m doing them justice.”

It would be easy to assume Lil Aaron’s intentions are merely to churn out click-magnet trollgaze, and Lil Aaron’s not beyond both poking the bear (of the pop-punk world: “It’s super-conservative, it’s super-safe, it’s super-offended-by-everything”) and basking in his place at the receiving end of its toothless growl (“A lot of people hated those songs, which is dope. People were like, ‘Yo, you ruined my favorite song.’ Which, like, I’m cool with all of that.”)

“My parents didn’t know I had a MySpace. It was where I could live my second life, away from them.”

But it also would be a mistake to confuse that happy side effect with the real goal. While Lil Aaron gleefully courts his haters in that most millennial of ways, accusations that his music might be insincere or opportunistic still evoke an audible wince. “This is the most honest, pure form of music that I could make, drawing from the inspiration I’ve had in my life,” he’s quick to note. “I’ve been scene. I’ve been emo my whole fucking life.”

Raised in a Christian household in which secular music was barred, Lil Aaron first discovered the world outside his door the way many kids of his generation did—through a computer screen. “My parents didn’t know I had a MySpace,” he recalls. “It was where I could live my second life, away from them.”

It was there, online on MySpace and PureVolume, that Lil Aaron first fell in love with a music that felt like it could belong to him. “At first it was power-poppy shit. I was really into Never Shout Never and the Ready Set, Owl City, that kind of shit. From there, it turned more into the pop-punk power-pop shit: Hit The Lights, Metro Station, Boys Like Girls. MySpace was how I got into that scene.

“Warped Tour and Hot Topic: those are the brands and the scene that I came from, that I grew up around,” he continues. “I used to go to Hot Topic every single day, just to hang out.” And while, like most kids his age, Lil Aaron eventually grew beyond the scene—especially as he discovered rap music—he isn’t looking to write off those years as some sort of secret shame. Indeed, those early scene ties have even leaked into his professional life. He called in members of instrumental post-hardcore adventurers Polyphia to play on Gloing Pain$, and when not working on his own material, Lil Aaron has written with pop-punk producer du jour John Feldmann and Travis Barker, among others.

“I’m a scene kid,” he announces with clear pride. “I’ve been a scene kid. There was definitely a point of my life where I tried to run away from it, but that’s just growing up. It’s cool, because it’s true to who I was when I didn’t give a fuck, when I wasn’t trying to impress anyone, when I was just a fan of music.”

Besides, what the aforementioned “old heads” are missing is that there’s a natural audience for Lil Aaron’s music, and it’s not them—it’s people just like Lil Aaron. He’s quick to point out that “so many kids that started off in the same world I did that are now listening to Lil Pump and Lil Uzi Vert, a lot of those kids made that leap from Warped Tour music to SoundCloud rap.

“This is what the kids are listening to,” he continues, “this is what the kids are getting behind. They can be angsty and they can also hear trap beats and bars. It’s just so obvious. It feels so right.” As far as Lil Aaron is concerned, the distance between the punk and rap underground is a lot shorter than it might sound. “You go to a Travis Scott show and then you go to a hardcore show in a basement, it’s the same energy. It’s kids jumping around, moshing, breaking shit, doing anything to get energy out and express emotion.”

Lil Aaron’s immediate plans are a bit up in the air—there’s another EP on the horizon, and future tour offers are still being worked out. Nevertheless, his ambitions (and, perhaps, his ego) remain as massive as his hooks. “I want to be the biggest fucking artist in the world,” he pronounces with complete self-assurance and not a drip of irony. “That’s always been the goal: to take this to the very fucking top. I’m a powerhouse in songwriting, in vision, in really being able to push something uphill. I see myself doing massive stadium tours, songs on the radio, what Good Charlotte was back then. These dudes were the punk pop stars! They were dating the illest, baddest bitches, and they were still wearing fucking studded jackets and shit.”

“It’s only going to get bigger from here.”

“If you hate it, please tweet about how much you hate it, because one of your followers is going to like it.”