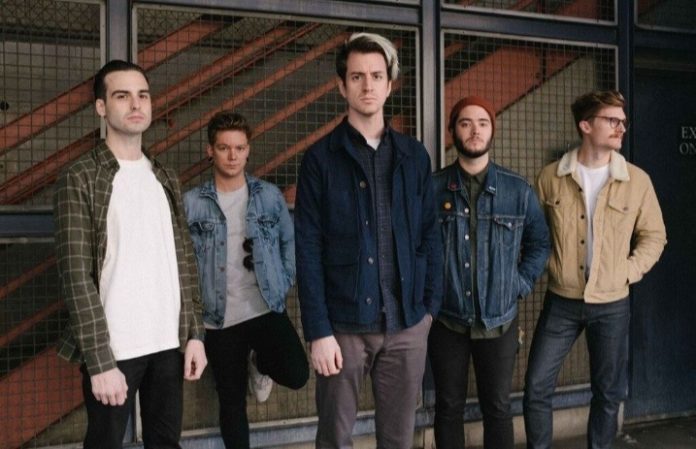 The Father, the Son, and the Holy Ghost; to millions of Christians around the world, the Trinity refers only to the divine. On LIMBS’ debut full-length, Father’s Son, it means much more. The chaotic post-hardcore band’s record confronts the earthly father just as much as the heavenly one. The secular and the metaphysical clash, bringing forth songs that are as wild as they are complex.

Read more: 10 songs for the blasphemer

Vocalist Chris Costanza, raised Catholic, based the record off his turbulent relationship with religion. Currently, he insists that he harbors no ill will toward anyone involved with the church, but he didn’t always feel that way. “[Father's Son] evolves from a point of anger and a point of departure from the church,” he explains. “A lot of things that I did feel at one point in time was looking at people as hypocritical, looking at people as judgemental and kind of scoffing about it and putting myself above them—which is definitely not the right move. Then around the midpoint of the record it starts looking inward, which is something I had to do personally because I had a lot of anger and a lot of self-righteousness.”

While his own parents took a rather relaxed approach to passing on their faith to their son, Costanza knew many people who did not have the same experience. “My parents didn’t force me into religion,” he says. “I know too many people who have gone through that and still do, and I really am lucky to have grown up with the parents that I did because it could have gone much differently.” Still, because of his friends’ troubles and his own questioning mind, he became disenchanted with the austerity of Catholicism. The primary reason for his departure from organized religion was his own disobedience regarding one crucial principle—premarital sex.

When Costanza became a father, he was forced to re-examine everything. “Becoming a dad five years ago was a big trigger,” he admits. “It’s almost an outing, because in the Christian community premarital sex is frowned upon, and nobody had known that I was sexually active. I was almost forced out of [the church]. I had tried to get back into Christianity after that, and it just ended up not being for me.” The birth of his daughter and the manifestation of his new identity as a father added yet another layer to the family dynamic present on the record. “It made me think about the things I’m teaching my daughter and the things I’m teaching her to value; the way I’m raising her to feel about her body and herself.”

The song “Black Thumb” specifically addresses the tension between sexuality and religion. The crucial lyric, “If my body’s a temple/Then I burned it to the ground,” embodies the struggle he and millions of other people have faced. “‘Black Thumb’ is about the really unhealthy relationship with sexuality that the church can breed in people—no pun intended. Just being taught to suppress and being taught to be ashamed of the sexual desires that literally every human being has. It was super-damaging to me and has been to so many other people I’ve known. That’s really important because I feel like that doesn’t get talked about a lot.”

In his own life, Costanza has gotten closer to achieving a sense of acceptance, but Father’s Son entertains the idea of what he would have be like if he hadn’t. The result is an explosive 11-track debut that fights this bitter inner turmoil tooth and nail. Every breath feels like it could be his last, and every drum hit and guitar strum sound just as desperate. The development of that kind of raw, genuine sound also is partially due to the fact that LIMBS got to work with Underoath’s Tim McTague to produce the album. “I learned so much about writing songs and structuring songs from him and just a new perspective,” Costanza says. “I was definitely pretty awe-struck at first. I have to remind myself not to take that for granted because 16-year-old me would be shitting his pants.”

Hopefully his pants stay clean, because LIMBS are on the No Fix tour with Underoath, Veil Of Maya and Dance Gavin Dance from now through the end of May.