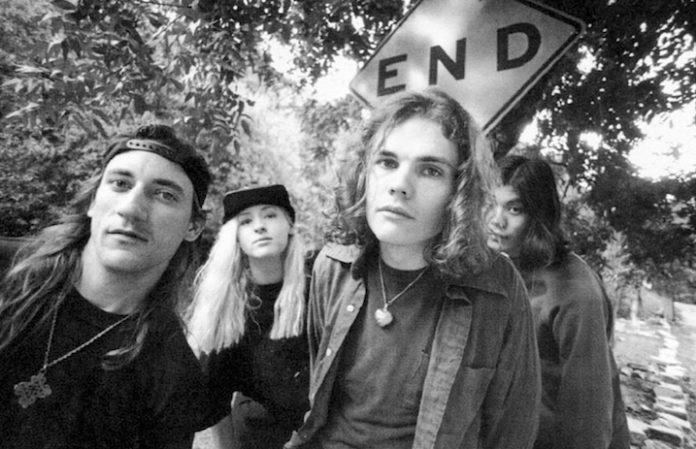 In the time since she stole her parents’ camera to photograph her Barbie dolls, Lisa Johnson became one of America’s (if not the planet’s) finest rock photographers.

From the mustiest clubs in the worst neighborhoods of LA to the vistas the Vans Warped Tour traverse every summer, Johnson has captured casual moments and manned battle stations in the most brutal of pits. She took time out from her TEI talks at Warped Tour to tell Jason Pettigrew some of the stories—and storied images—of her career.

NIRVANA
From The Muddy Banks Of The Wishkah package, 1993

I got sent to Seattle to photograph them, and that photograph ended up being used in that packaging. It wasn’t intended at the onset, but it was later used in it. I love this photo, and they were definitely one of the bands where people would tell you how difficult they were to work with, and I’m like, “No, they’re not difficult.” I think they were equally as afraid of the publicists as I am. They were very nice.

There was a great level of cynicism with all the stuff going on around them. I’m thinking that, in you, they found a kindred spirit that understood what they were about. Like, “Oh, she gets it.”
Yeah, exactly. And it’s funny, too, because for this shoot, I set up some music and I was like, “I’m gonna play something cool that they’ll really like.” So I put on Fu Manchu or something and after a while, they were like, “Can we change the music?” I was like “Sure!” And Krist [Novoselic] put on the Beatles. I was like, “Whoa, even better, this is awesome!” I wouldn’t have expected that from them. The perception was that you’d think they’d want something noisy and loud, but really they didn’t. They wanted the Beatles, so I was happy about that.

You call this “the end shot.” Was it the last shot of the session?
No, just because it was the end of the road, and I always just call it the end. The funniest story about this is when we were doing it, I don’t think they knew the sign was there. At the end of the shoot, I was like, “And look, the ‘End’ sign so when you guys break up and get back together after 20 years, you can use this picture for your album cover!” Billy [Corgan] and I laughed hysterically. We thought it was funny. James [Iha] and D’arcy [Wretzky] didn’t think it was as funny, but Billy and Jimmy [Chamberlin] were laughing. True story. So when it was time for that Greatest Hits record, Billy called me up and was like, “We’ve got to get that photo and it’s got to be the cover,” and I was like, “Okay.” I love that photo. It really captures that early time. They were still in a van. It was a very—you could feel that energy. Something was going to happen.

RAGE AGAINST THE MACHINE DVD cover, 1999

They had me shoot, probably three nights or so. They’re always looking for something to use, and it’s really hard to get them doing something—like the pinnacle of a moment together at the same time. You can’t control where people move onstage or the lighting situation. I had no control over it, and it was very dark lighting—like on-off-on-off. So it was very exciting to get this super-awesome photo of them. It really captures who they are and what they’re about, so they ended up using that on the live DVD back in the day. It’s not a composite shot: That is what it is on film. That’s the shot, you know. All this early stuff is on film.

It’s from Warped Tour 2003 in Dallas, Texas. Probably the hottest day I have ever felt in my life—like literally steam coming off of your body because it was just so hot. I grabbed this literally seconds before they went onstage. I love this photo so much. They look awesome, period. It captures them—it’s just Rancid to me.

Nothing explains brotherhood like Tim and Lars together, that’s for sure.
Yeah, and it’s literally seconds: Lars is literally picking up his foot to walk onstage. Had I breathed or blinked, this moment would not have happened. It’s literally the calm before the storm.

This image was one that really defined the scene at that time.
That’s one of the reasons I included it. So many people probably don’t realize that I shot that. It’s probably one of the earliest photos of them as a group. They’re just so young and in the incubation stages of one the biggest modern rock bands of our time right now, to be quite honest. I love that photo. We were kind of joking a little when we did the hand, but we loved it.

According to your notes, this is something that’s never been published before. What’s that thing in, ahem, “the way?”
It’s definitely a Warped Tour photo. It’s like water. You know, he’s shaking his head, and it’s sweat off his head. And then there’s a big sunspot in there. I know I’ve printed this photo, but I definitely haven’t put it up online or anything, so I say unpublished. Maybe people have seen it, but I don’t think they’ve seen it like this. This is just a detail from the image.

That’s a great shot.
MCR were really exploding, the early stages of them coming into their own. It was an exciting time. This was not the first time I’d seen them—obviously they’d been on the tour prior because this is another Warped Tour photo—but just seeing the energy come off of that stage and the reaction that the fans were having. It was just super-intense, and you just can’t replicate that moment, because it was such a moment in time, and we’ll never get back there. So I’m glad I was there to capture some of it on film. Because it’s not ever gonna happen again.

That’s your photo on the book, as well as the cover of his Hate Culture record.
They sort of were happening concurrently, and we did a collaborative effort with this book Flowers + Filth. It started because he found this really cool vintage camera. He didn’t even know if it would work, but he thought I might like it. He sent it off to me, and I was like, “This is so cool! Let’s do something—like you do some poems and I’ll do some photos, and we’ll kind of put them all together.” Over the course of about a year, he collected poems and wrote some stuff. It ended up actually being a little glimpse into a year of his life that was very tumultuous. It went from being very, very dark to, at the end [when] we were literally done with the book, he turned his whole life around. We didn’t really intend for it to be semi-autobiographical, but it ended up being that. That was a really cool experience. I loved how it came out.

That was super-collaborative for everybody—all of us, all around. They were very involved in this. Obviously they were shot at the exact same time. That’s why they look so similar, on purpose. They’re almost so similar that sometimes I’ll look at them and be like, “Which one’s which?” They kind of had an idea of what they wanted, and then we worked to make it happen.

Where was that photo taken?
In Skiba’s kitchen. Every inch of his kitchen right to the little dining nook is taken up by this photo. That’s about how big it is. I’m kind of in the living room taking it.

Whose idea was it to wear masks?
Definitely theirs. I don’t know if it was Matt or Atom’s, but they had a whole assortment of masks they wanted to try. Every time I see a comment that’s [referencing] The Bunny The Bear, we didn’t even know what the hell that was and we had to look it up after. No, we came up with this all by ourselves. And it’s a fox. It’s not a bear.

LARRY AND HIS FLASK, Warped Tour 2011

This looks like it was shot on film.
I met them at Warped Tour. They’re a lot of fun and kind of out there. I really felt compelled to capture them—they were driving in this sort of RV that later broke down. I think they were calling it Molly. She broke down maybe a week or two later, so we’re really happy to have captured this. I just felt very compelled to make sure that I captured them and took a proper portrait of them that captured their essence.