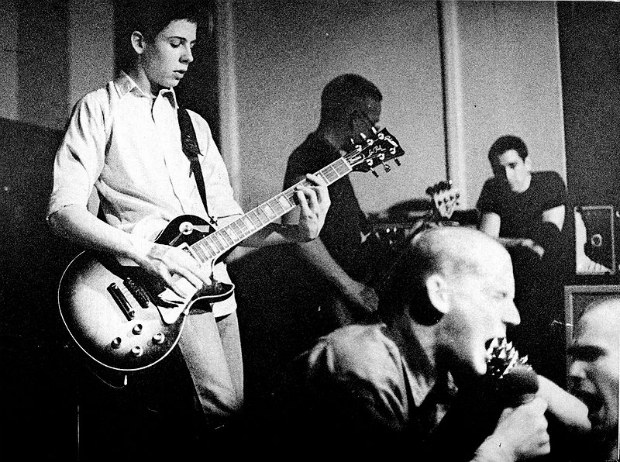 1983: Hardcore rules, OK—at least if it comes from America. England was mired in the nü  pop of Culture Club and Duran Duran as its punk scene further slipped into shitty versions of what Motörhead did brilliantly. Not to say a similarly boneheaded ethic wasn’t starting to slip into U.S. hardcore. But the best of our bands weren’t just faster and louder. They had some interesting ideas, be they musical or philosophical, to dump into the blender.

They might’ve tried to halt Ronald Reagan’s Strategic Defense Initiative or Maggie Thatcher’s landslide reelection. Really, the makers of the two best punk albums of the year likely were more concerned with who was buying the next case of the cheapest beer. Check out the 15 best punk albums of 1983 below.

Read more: These punk albums from 1982 continue to bring the fire to this day

Minneapolis’ drunkest were last heard from the previous year, with the Stink EP—eight blazing near-hardcore snotbombs such as “Kids Don’t Follow” and “White And Lazy.” Finally hitting the touring circuit, they were gaining a reputation as a supremely unpredictable live act, likely to show up absolutely shitfaced and play 12 bars of 100 of the worst covers they could barely recall. Good thing their records could effectively showcase Paul Westerberg’s sensitive, wise-ass songwriting. Hootenanny housed a clutch of his best, especially “Color Me Impressed.”: “Everybody at your party/They all look depressed/Everybody’s dressing funny/Color me impressed….”

Prior to rediscovering his Johnny Cash records, Mike Ness was digging the Sex Pistols, the Clash, New York Dolls, Bowie and early Rolling Stones. He abused mascara, spiked his hair high above his head, donned spray-painted rags and treated VFWs nationwide to tuneful post-’77 racket bursts such as the killer 1982 single “1945.” Mommy’s Little Monster houses nine of his best early originals: “Death and life as I’ve never seen before,” he croons on “Hour Of Darkness.” “One more trip like that and I’m in the mental ward!” This, Social Distortion’s first, would be their punkest full-length.

Meanwhile, Australia continued to pour out killer, sophisticated punk steeped in the examples set by Radio Birdman, the Saints, the Scientists and even the Birthday Party. Celibate Rifles began as a teen outfit in Sydney, with a Sex Pistols parody name and Birdman’s open-minded example. Guitarists Dave Morris and Kent Steedman hammered down bursts of wah-saturated white noise. The tempos occasionally approached a washboard thrash. But singer Damien Lovelock was 10 years his bandmates’ senior, and his lyrics betrayed that maturity. With the occasional horn section and jazz odyssey, Sideroxylon‘s a stunning debut.

Read more: These 15 punk albums from 1980 were complete game-changers

Minor Threat – Out Of Step

With Bad Brains (as their song claimed) banned in D.C., Minor Threat had stepped into the breech as the nation’s capital’s prime hardcore act. The 1981 self-titled EP established their basic blueprint: Bad Brains minus reggae as a musical base and singer Ian MacKaye‘s gritty bawl declaiming his version of the Positive Mental Attitude—no sex, drugs or alcohol, aka straight edge. Following a brief breakup, Brian Baker moved to guitar alongside Lyle Preslar, and Steve Hansgen assumed bass duties. Their sole LP’s nine songs boasted more complex arrangements and MacKaye penning more personal lyrics. This became the sound of DCHC. A punk album that cemented a subculture still going strong to this day.

Four LPs into their recording career, and two into being Elektra artists, X were becoming a punkier take on what’s now called Americana. Tracks such as “We’re Having Much More Fun” and “Poor Girl” feature a distinctive Nashville twang, the latter boasting full-on Bo Diddley beats. “I Must Not Think Bad Thoughts” featured cocktail jazz verses and punk choruses, Billy Zoom offering some deft Les Paul runs. “The New World” and other tracks saw John Doe and Exene Cervenka getting more political than before. It would be X’s last great studio LP.

The Cars’ Ric Ocasek took a shine to Rastacore warriors Bad Brains. He booked them into Boston’s Synchro Sound Studios, rerecording several highlights of their ROIR tape, plus a clutch of new songs. Ocasek’s cleaned-up production made light-speed thrashers such as oldies “Banned In D.C.” and “Sailin’ On” as well as new blitzkriegs “Coptic Times” and “Destroy Babylon” resemble the coming speed-metal sound, while “I And I Survive” is their best reggae tune. With future albums devoted to a metal/funk/reggae hybrid, this would be Bad Brains’ last punk album. It was a great one.

Wipers – Over The Edge

Rock autodidact Greg Sage had been kicking around Portland, Oregon, since the early ’70s, eventually forming Wipers in Year-Of-Punk 1977 to showcase his grungy, economical guitar work and shredded-nerve-ending songwriting. Their third LP would be the first to gain them a broader audience due to Brain Eater Records’ stronger distribution ties. Good thing it was essentially the apex of Wipers’—and Sage’s—art. The title track certainly has a life beyond the band, cited as influential by Kurt Cobain and covered by everyone from Hole to the Mono Men.

This was the second full-length and overall fifth release from the self-proclaimed “corn dogs from [San] Pedro.” It was truly the record that grabbed the attention of fanzines and the underground press and twisted hard. At 18 songs—many finally breaking the two-minute mark—and nearly 30 minutes total, it was nearly double the length of debut The Punch Line. Bass genius Mike Watt wrote all the music, resulting in stumbling time signatures and busy, dirty four-string parts. And it began with one of Minutemen’s best tunes, “Bob Dylan Wrote Propaganda Songs.”

Dicks – Kill From The Heart

Austin’s other great punk hope, the Dicks, wielded a mutant blues-punk that was more vicious and boasted more political ballast than the Gun Club. Rotund, cross-dressing Communist singer Gary Floyd yowled angry lefty polemics directed at Texas’ redneck culture as bassist Buxf Parrot, guitarist Glen Taylor and drummer Pat Deason menaced around him, resembling surly ex-cons hungover upon a jailbreak. It was a truly intimidating musical and visual spectacle. The sole LP by their original lineup, Kill From The Heart, contains grimy buzzbombs such as “Anti-Klan,” “Rich Daddy” and “No Nazi’s Friend” that laid out their agenda in no uncertain terms.

Billy Bragg – Life’s A Riot With Spy Vs. Spy

The Bard Of Barking is one of many who witnessed the Clash in their prime and said, “I wanna do that!” After fronting minor-league punks Riff Raff and a brief stint in the British Army, he returned to London, busking around town solo with an electric guitar. Initially a set of songwriting demos, Charisma Records released this as Bragg’s first LP. Bragg’s charming folk/punk/pop nuggets were the most exciting 1983 British sound this side of the Smiths.

The Hüskers were still in the thrall of hardcore with their debut LP, released on their own Reflex Records label. Most tracks averaged two minutes, although there were a pair of back-to-back 30-second thrashers, “Punch Drunk” and “Bricklayer.” The ’60s-pop-gone-thermonuclear approach that’d be Hüsker Dü’s trademark is hinted at in the jangly title track. But for now, Bob Mould, Grant Hart and Greg Norton still desire to be hardcore’s most ballistic and brutal band, virtually rivaling Britain’s Discharge in the intensity stakes.

Read more: These 15 punk records from 1981 have some of the year’s best music

Formed in 1981 in Alexandria, Virginia, Scream are best known for the discovery of a talented young drummer who joined when original skin-slapper Kent Stax left: Dave Grohl. For now, Stax was firmly in place alongside bassist Skeeter Thompson and the brothers Stahl—singer Pete and guitarist Franz. They were essentially the last of the first-wave harDCore bands, and the MacKaye-produced Still Screaming was Dischord Records’ first full-length LP release. This quartet could certainly shred with the best, but cuts such as “Piece Of Her Time” showed a musicality already becoming increasingly rare in hardcore.

Government Issue, centered around vocalist John “Stabb” Schroeder, the David Lee Roth of DCHC, already had a colorful past behind them, including an ever-shifting lineup that featured what was becoming a mandatory guitar stint by Minor Threat’s Brian Baker. By the time of their MacKaye-produced debut LP, what became GI’s core—Tom Lyle’s massive guitar work and drummer Marc Alberstadt—settled in, with Mitch Parker thumping bass. Most songs blazed by in 60 seconds, but future classics “Puppet On A String” and “Teenager In A Box” expanded the pallet nicely.

The third Circle Jerks full-length saw them dubiously signed with notorious sleaze Jerry Goldstein, who was on his way to screwing N.W.A. six ways to Sunday later in the decade. Some of the Jerks’ most deathless works are here, such as “When The Shit Hits The Fan” and the title track medley of hits from the Carpenters, Paul Anka and Tammy Wynette.