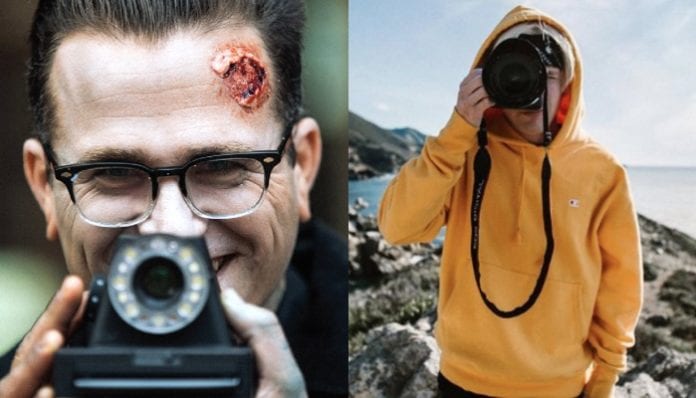 Finding a new band is awesome. What’s more awesome is finding out the members of said band are multitalented outside of their own field. For as long the technology has been around, music and photography have gone together like peaches and cream. Whether they are freelancer photographers, snapping on the road or just looking for something fun to do at home, these musicians show us a different side of them from behind the lens.


Have you ever met somebody so talented that it makes you mad? Joel Birch of metalcore outfit the Amity Affliction is not only a vocalist, but an illustrator, writer and father. The subjects of his film photographs range anywhere from city streets to gnarly surf snapshots.


Using many of his Leica cameras, Nikki Sixx’s black-and-white photographs center around a variety of topics, mainly focusing on circus-like surrealism and documentary shots of homeless communities around the world.


State Champs’ bassist Ryan Scott Graham can make some gorgeous photos with a 35mm camera. The vintage style of his photos of people and places range from all over the world, such as Paris and Japan. They make us wish we had a friend who knew their way around a camera like him.


Since reprising his role in Paramore last year, drummer Zac Farro has taken up lomography, which is associated with a unique, colorful and sometimes blurry photographic image style and an analog camera movement. His quaint photographs give off a retro, psychedelic vibe that reminds us of Woodstock days, and he has discussed his craft with Lomography Magazine.


To learn that PVRIS bassist Brian MacDonald takes photos that are just as mysterious and eerie as his band’s music isn’t all that shocking. He works in both film and digital media, capturing the places he travels to in a new, phantasmagorical light.


Si Delaney adeptly captures the world around him, but in a way that makes it seem like the shots came out of a movie. Whether he’s taking photos of his friends at a pinball parlor or documenting his travels in places such as Sri Lanka, they are always too beautiful to not stare at.

Maxx Danziger, SET IT OFF


When he isn’t banging the drums or snapping pics of his adorable cat daughter (and unofficial Alternative Press mascot), Pistol, Maxx Danziger enjoys playing with color in his beautiful photographs of seascapes, wildlife, nature and, of course, himself. He inclines toward shades of pink and green to give off a certain romantic, utopian aura.

Ryan Phillips, STORY OF THE YEAR


SOTY guitarist Ryan Phillips splits his time between traveling with his platinum-selling rock band and pointing his camera at people…and is very good at both. The main focal point of his stunning work is portraits, with an emphasis on musicians, sports figures and lifestyle snapshots.


Casey Moreta, guitarist of Hey Violet, can capture light in some truly amazing ways with his camera. He is able to use light sources that might usually be seen as troubling in photos to give his work moods of their own.


Bassist and camera-enthusiast Luke Henery hails from the land down under along with his alternative rock four-piece, Violent Soho. His photographs are, to put it lightly, out of this world: A master of contrast, action and staging, his work transports its viewers to a different realm, one where they feel they’re a part of the image at hand.