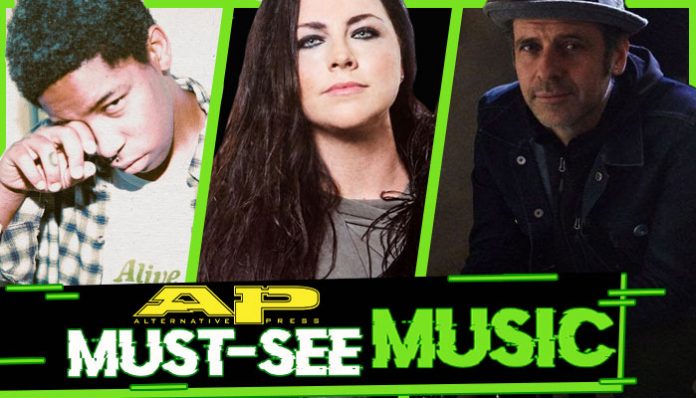 This week’s Must-See Music selections make us want to slap people who complain that there’s “no good music anymore.” There is great music out there—the complainers simply don’t know what’s going on.

If you’re seeking alt-rock icons, punk lifers, guitar rockers and pensive singer-songwriters,you’ve come to the right spot on the web. This is Must-See Music. Let your hair down and turn your volume up.

Evanescence – “Use My Voice”

Cynics have often derided Evanescence leader Amy Lee as some kind of patron saint of mall goth. Said haters can sit the hell down now, as the singer has returned with more conviction than ever. “Use My Voice” is anthemic, uplifting, angry and consoling. It’s a power ballad for every woman who has been maligned. The important thing here is that Lee comes off as a genuine, no-pretense fighter, and the song’s triumph is its universal appeal. With more ground support from Lzzy Hale, Taylor Momsen, Lindsey Stirling and others, Lee and Evanescence are making their stances crystal clear and loud as hell. Smash the patriarchy.

New York City denizen Micky James has drips and drabs of David Bowie, the Rolling Stones and the Clash in his DNA. This week, we premiered the video for his new song “Kings,” the most political track he’s ever done. After a week teeming with intercontinental absurdity, James is spurring civic pride in the best way with loud guitars, a killer hook and some much-needed charisma.

Brit-punks Healthy Junkies put together a three-and-a-half hour “rockumentary” of their 2018 tour of America. After frontwoman Nina Courson put it all together, it was up to guitarist Phil Honey-Jones to create a score for the thing. That is how Forever On The Road transitioned from a display of rock ’n’ roll excess into a solid full-length. We premiered “Last Day In L.A.” earlier this week, but this is truly a kickass rock song that needs jammed in your playlists between the Damned and the New York Dolls.

A familiar face lands in Must-See Music. Listeners know Michael “Jag” Jagmin as the former frontman for California post-hardcore band A Skylit Drive. Teaming up with guitarist Jonathan Kintz (ex-Of Mice & Men) under the name Signals, the duo are bringing both hooks and the riffage. “Turn Back Crime” is an indictment of a particularly toxic former ASD business associate. It’s got enough metal to make your head move and enough scene signifiers to make you want to shop online for white belts. What’s not to love?

KennyHoopla and grandson – “lost cause//”

grandson, one of our favorite genre-deniers, rehauls this track by KennyHoopla into what the singer calls “new-wave nostalgia.” Hoopla’s got a catalog of shape-shifting jams that are more intrepid than indie. And they sound great when you’re sharing Prosecco late at night with your honey or getting all pensive on social media by yourself. Expect KennyHoopla to become a fixture on Must-See Music. In a parallel universe, the singer leaves a hefty tip for his DoorDash driver, Oliver Tree.

Everyone Dies In Utah have been playing hands in the metalcore poker game since 2008. But once the world heard their take on Joe Exotic’s “Here Kitty Kitty,” people are paying more attention. Here the Texas unit deliver “Passenger (Pt. 2),” which posits what Deftones might sound like if they went post-hardcore. The track comes off not typically heavy-handed (all the fury here comes from vocalist/synth op Danny Martinez) and could very well portend a psychic shift in the genre EDIU came up through.

With four full-lengths under their belt, ERRA have carved their niche on the veneer of metalcore. There’s a special madness here on “Snowblood” that will also appeal to fans of old-school electro-metal (Static-X) and iconic post-punk (Killing Joke). Frontman/guitarist Jesse Cash snarls the horror movie mise en scenes as a metaphor for mental degradation, and the cumulative effect is completely fist-tightening. Don’t swing them around, though, because you might break something. LP5 is going to simply burn.

Last time we heard from DED frontman Joe Cotela, he was hunkered down in quarantine with his partner, In This Moment’s Maria Brink. Fortunately, it didn’t stop him and his DED-mates from creating this slab of tungsten metalcore. According to the singer, “Parasite” is a metaphor for states of mind and behaviors that tear us down from the inside. “It’s an invisible monster inside us that torments and feeds off us,” he says. “It is empowering and cathartic to me to be in those shoes.” We think the driving rhythms and Cotela’s bellow will make this eligible for pit-starting time trials in 2021. Assuming we can all safely get in a room by then.

Bouncing Souls – “Ghosts On The Boardwalk”

In October, the New Jersey punk-rock icons return with Volume 2, a selection of alternate takes of some of their favorite tracks. “Ghosts On The Boardwalk” originally appeared on the 2010 album of the same name. The original version does have a certain anthemic resonance. But this acoustic take really shows how special a singer Greg Attonito is. The takeaway here is that sometimes you don’t need the decibels to get your point across. And the Bouncing Souls continue to rule, 30 years later.

The first thing that shakes you while listening to “rue” is how girl in red (aka Norwegian singer/songwriter/producer Marie Ulven) knows where we’ve been. The lyrics feel like they’ve been stapled to your heart (“Don’t wanna make it worse/I’m gonna make it work”). The despondency and optimism Ulven simultaneously conveys is truly unforgettable. “rue” might be the text message your best friend or lost lover never sent you. girl in red’s impending debut album might be the best reflection of modern life the pandemic mindframe has given us. Must-See Music? More like Must-Love…