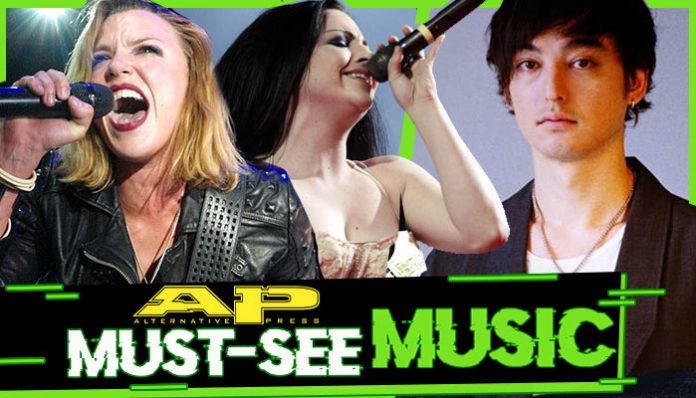 If it’s Friday afternoon, it’s time for Must-See Music, our recap of the week in video and song releases, as well as all the new exciting premieres brought to you exclusively by Alternative Press.

Plenty of great music was heard this week. A team of rebooted/reinvented U.K. upstarts finally released their second album. Two dynamic artists teamed up for a bracing collaboration. Wondrous ’90s post-grunge vibes and punk pop were emanating from Brooklyn, New York. And while we shouldn’t be dancing out in public (social distancing in effect, please), it didn’t stop a superstar DJ from dropping a new track with a pop personality. One of metal’s most exciting bands dropped a slab of rock right on us, and some Midwest pop-punkers sent us a gift around 10 in the morning. This is truly some Must-See Music.

As a big thank-you to their fans, All Time Low made a big gesture. This acoustic version of “Monsters” from their latest album, Wake Up, Sunshine, puts a new spin on the fan-favorite track. Having covered ATL since their early days, we think we’re qualified to comment. This version of “Monsters” is truly a crowning achievement. Alex Gaskarth has never sounded better, and the band play with great finesse. This is truly the beginning of ATL’s next chapter.

With “Insincere Apologies,” Brooklyn, New York’s Bloody Your Hands delivered a great chunk of ’90s alt-rock somewhere between Pixies and Superchunk. Alternative Press premiered the song, which states that in a bad relationship, there’s no really no fun in “dysfunction.” Nonetheless, it’s a great taste of the band’s impending album, Sunday Scaries, arriving at the end of the month. “This is an album about anxiety, isolation, hope, death and struggling with adulthood,” frontman/guitarist Jameson Edwards says. “It was written over a two-year span that was both brutal and beautiful. It was an honest, awkward and painful self-exploration.”

It’s been five years since Conquer Divide brought some new music to the table. We don’t know what was happening in the time leading up to “Chemicals.” But this band have never sounded more confident and intense. Vocalist Kia Castillo completely nails the vocal-cord gymnastics with strong melodies and bestial roaring. Isabel Johnson sounds poised for next guitar-hero status. A contender for the best hard rock/metalcore crossover of the year.

Creeper’s 2017 debut album, Eternity, In Your Arms, was a nice document that mixed My Chemical Romance’s flair for the dramatic with Rise Against’s anthemic tendencies. Their new album, Sex, Death & The Infinite Void, follows through on the reinvention frontman Will Gould sought out for his band. The album is equally influenced by classic ’70s glam and ghost-town Americana. “Poisoned Heart” feels like a throwback ’70s country-pop crossover. Gould has more personality than most of Creeper’s colleagues. It would be great if America would embrace what they’re bringing to the table. Creeper’s reinvention is truly some Must-See Music.

French metal quartet Gojira have always come off much more thoughtful and considerate than most metal acts. The animated video for “Another World” is a perfect medium for frontman/guitarist Joe Duplantier’s ruminations on mankind. If your musical tastes veer a bit softer than Gojira’s catalog, you may want to reconsider. Both the song and the storyline for the video are compelling, beautiful and (spoiler alert) tragic.

Halestorm’s Lzzy Hale teams up with Evanescence‘s Amy Lee for a new version of “Break In,” originally from 2012’s The Strange Case Of… LP. Hale and Lee deliver amazing performances that maintain the depth of the original track while reinventing it in a truly emotional way. The version is one of six songs the band are reworking for an EP, Halestorm Reimagined, overseen by producer Nick Raskulinecz (Foo Fighters, ’68). We’re looking forward to hearing Hale belt out “I Will Always Love You,” the classic Dolly Parton/Whitney Houston ballad.

The superstar producer/DJ and the vocalist/YouTuber team up for some serious fun and hit-making. Joji crashes a video shoot for the ultimate vacuous boy band, with hilarity and hell-raising to follow. You can’t help but wonder if Diplo is making a statement about the insanity of the music business or if he just needed to offset the song’s melancholy lyrics. We’re waiting for that LP, Joji. We’ll hold a Must-See Music slot for you…

LIGHTS dropped Dead End, a sweet LP of new tracks and remixes of fan favorites designed for your streaming pleasure. Sharing co-producer credits with MYTH (whom she collaborated with on deadmau5’s last U.S. tour), LIGHTS delivers pop perfection from both fronts. The new tracks include the earworm-laden “Outdoor Sports,” the previously released “Batshit” and the title track. The remixes are beat-heavy reinterpretations of some of her best songs, including the platinum-selling “Up We Go.” The evidence is out there that there’s nothing LIGHTS can’t do. Just submit to her charm and enjoy life.

Spiral Heads’ speedy punk-pop blasts will lift your spirits and maybe save you a few bucks on espresso from Starbucks. The trio—featuring members of American Nightmare, MGMT and Doomriders—had perfect timing, finishing the song before quarantine orders for COVID-19 were implemented. “I do think there was this feeling in the air already that some shit is about to go down at the beginning of this year,” frontman/bassist Simon Doom recalls. “I was supposed to go on an MGMT tour in mid-March, and there were already mumblings about possible cancellations by the end of February. There was a bit of ‘now or never’ in our approach. Instead of waiting for a studio, we just recorded the songs ourselves in my rehearsal space.”

Stand Atlantic frontwoman Bonnie Fraser has enough personality, character and songwriting smarts to charm your playlists. The video for “Blurry” is a look inside the singer’s mind. Check out the dream sequence of a game show host holding a big check. Will Fraser cash it? She won’t need to: Stand Atlantic’s new album, Pink Elephant, is simply that great. The band have only gotten better since they toured America last year. If you weren’t on the ground floor, no sweat. This is truly the band you’ll be stanning by fall. Must-See Music? Add must hear and must love, as well.