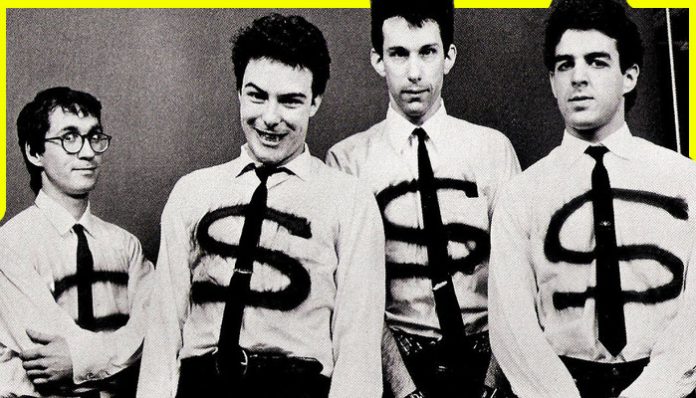 The seven-inch 45 RPM single was built for punk rock. Pick your two best songs, say your piece in two or three minutes and get out. It was an affordable medium for bands who didn’t have a record deal. The promise of entire albums were lost to time when groups dissolved after maybe one strong single. Others purposely kept singles off albums in a value-for-dollar move that marked early punk. The history of punk and hardcore is frequently told via non-lp singles.

Some major labels repackaged the U.S. editions of some of their U.K. punk signings with single tracks. Obviously, there’s been some confusion among younger punk fans over the years. Thus, we present 10 of the best non-LP punk singles of the ’70s.

Read more: These 15 punk records from 1980 were complete game-changers

Meet the artier half of legendary Cleveland protopunks Rocket From The Tombs. The “fuck art, let’s rock” components became the Dead Boys. Pere Ubu introduced themselves with one of the earliest independent American punk singles, though it isn’t modern textbook punk. “30 Seconds Over Tokyo” is over six minutes of a rumbling reggae rhythm, a serpentine lead guitar line courtesy of founder Peter Laughner. On top, singer David Thomas mumbles an intense psychodrama from the viewpoint of a WWII fighter pilot in the Doolittle Raid, about to drop molten revenge on Japan for Pearl Harbor: “No place to run/No place to hide/No turning back on a suicide ride.”

Crime dressed like vampire, cross-dressing greaser cops and featured a bass player who’d been in a prehistoric lineup of San Francisco protopunks the Flamin’ Groovies. In an ultra-raunchy self-release that’s as effective an introduction to punk as any, the drummer struggles to keep up with his bandmates’ filthy imitation New York Dolls/Stooges riffs. (He never catches up.) The rhythmic tension somehow works, backing the singer’s snarled technological double entendres: “Too wild for the radio/AM/FM auxiliary mode/…Bassed and trebled and you got my level!” The all-thumbs drummer somehow finds their groove on the B-side, which is one long, high-speed garage-punk sneer.

Read more: The contributions of these 10 hardcore bands will be felt for decades

This is probably one of the most celebrated records of 1977. X-Ray Spex truly embodied punk’s “anyone can do it” ideal: Poly Styrene, a mixed-race teenager with braces sees the Sex Pistols and starts a punk band. Another young woman, Lora Logic, honks sax atop it all like they were a sulfate-and-leather Roxy Music. Styrene howls an anti-consumerist rant having more to do with economic slavery than the kinky sexuality many assumed. “Chain-store, chain-smoke, I consume you all/Chain-gang, chainmail, I don’t think at all.” Over four decades later, it still thrills.

Three months after recording this blast of overdriven Fender tube amps and ferocious self-belief, this San Francisco quartet would open the Sex Pistols’ final show. Even this early, Avengers were already one of American punk’s best bands. Greg Ingraham’s guitar work’s amazing and economical. Meanwhile, Penelope Houston snarls lyrics that brim with the confidence that punk shall soon take over the world: “I am the one who brings you the future/I am the one who buries the past/A new species rises up from the ruins/I am the one who is made to last!” They were over, three years later. Another non-lp punk single worthy of collector hoarding.

Based around brothers Chip and Tony Kinman, the Dils played furious early Who-style power rock with Communist seasoning that felt like a reasonable U.S. approximation of the Clash. Officially titled 198 Seconds Of The Dils, this was their second 45, preceded by “I Hate The Rich” and “You’re Not Blank.” Never having issued an LP in their lifetime, this would prove the Dils’ ultimate documentation. Tony snarled over Chip’s ringing power chords, keening Everly Brothers harmonies and Rand McNally’s pummeling Keith Moon-esque drums. “I wanna war between the rich and the poor/I wanna fight and know what I’m fighting for.”

Modern Clash die-hards may be confused, considering how their U.S. label repackaged a version of their first album that was essentially a compilation featuring chunks of that debut shuffled with choice 45 A-sides. But many of the Clash’s best tunes were only released on singles, including what might be considered their masterpiece. Over the ultimate distillation of their punk-reggae fusion, Joe Strummer surveys Britain’s dystopian nightmare through the lens of a reggae gig that felt more like Vegas than Jah Rastafari rhythms: “All over people changing their votes/Along with their overcoats/If Adolf Hitler flew in today/They’d send a limousine anyway.”

Read more: The best punk albums of 1984 were leaner, meaner and so much weirder

Weirdos – “We Got The Neutron Bomb”/“Solitary Confinement”

Nuclear angst ruled the day during punk’s birth. ’70s American punk was never as political as the British variant, the Dils and Dead Kennedys aside. Then word hit that the U.S. was ramping up manufacture of the “cleaner” W70 neutron bomb, which destroyed all life forms while leaving buildings intact. L.A.’s premier pogo rockers Weirdos responded with an appropriately explosive mashup of heavy-metal chords with Johnny Thunders-style leads, as singer John Denney accurately captured a generation’s neutron anxiety: “We don’t want you, we want your machines/United Nations and NATO won’t do/It’s just the red, white and blue!”

Read more: These 15 punk albums of 1985 were the roots of alternative rock

Vancouver’s D.O.A. mixed the hell-raising spirit of the Damned with the Clash’s fuck-you leftism and the Sex Pistols’ sneer. They’re also one of the first punk bands to brand themselves “hardcore” despite rarely rocking faster than the Ramones. Over the best rhythm section they would ever have (rock star bassist Randy Rampage and 14-year-old Keith Moon clone Chuck Biscuits on drums), mainstay Joey Shithead unleashes an air raid siren guitar hook as he growls his own disappointment with warmonger leaders: “No human lives stand in the way/’Cause we’re on our way to a new clear day!”

It took years for Lodi, New Jersey’s horror-punk kings to issue a full-length despite at least two mixed-and-mastered attempts prior to 1982’s excellent Walk Among Us. This meant Misfits built their ghoulish reputation across five singles and three EPs before they released one long-player. This three-song, non-lp punk single might be the best of the bunch, featuring a trio of Glenn Danzig‘s catchiest shout-along anthems. When you have three crushers as solid as these, it’s hard to pick a supreme tune from the bunch. But the title track, with guitarist Bobby Steele half-inching a riff from Joy Division‘s “Warsaw,” may win.