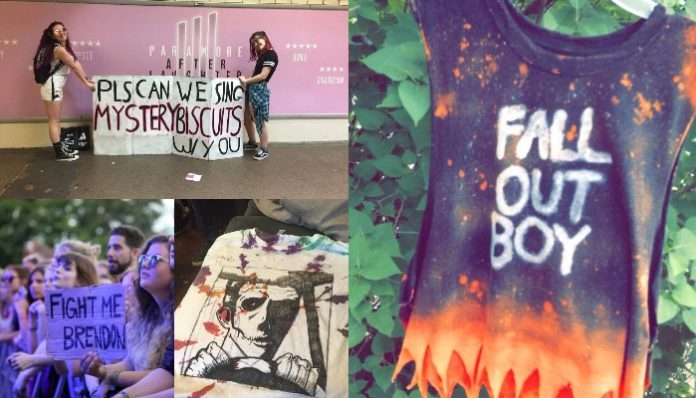 One of the easiest ways to get noticed at a concert is by holding up a funny sign or wearing an awesome band T-shirt while in the crowd.

When people finally get to see one of their favorite bands live, it’s pretty normal to go all out and make signs or T-shirts because it’s part of the experience. Here are 11 T-shirts and signs spotted at concerts that were too cool, or too funny, not to share.

I think we had a cool home-made shirts! ☺ Thank u for best night of my life! Already missing u guys ♥ @5SOS pic.twitter.com/UROrBxPtWD

2. This little boy needed to let everyone know who his idol is at a Twenty One Pilots concert.

thanks so much for a great valentine’s day, my little brother had an amazing first concert |-/ @joshuadun @tylerrjoseph @twentyonepilots pic.twitter.com/yf1JLHyGfD

This sign was at @AllTimeLow concert in mexico city, what do you think @Calum5SOS ? pic.twitter.com/NveiOFPjot

preview of my shirt for the concert Wednesday. s/o to cassie ? #TheMaine pic.twitter.com/9oTI3ksx63

5. This person had a front row spot at a Panic! At The Disco show, and challenged Brendon Urie.

I can’t stop laughing about this Official™ photo from a panic at the disco concert pic.twitter.com/v02s8X8R5G

6. This amazing Fall Out Boy shirt that we definitely need in our lives.

My rad homemade @falloutboy shirt for the concert tomorrow pic.twitter.com/hE4DCt7xvR

7. This person’s first concert was a Palaye Royale show, and they had to let everyone know, including the band.

I’m so glad it was Palaye Royale who took my concert virginity!! pic.twitter.com/vyQrgr6YxY

8. Someone got a prom date thanks to a Mayday Parade concert, so go them.

@blink182 making my shirt for the concert pic.twitter.com/xFyvIg3R1l

10. These Paramore fans that really wanted to get the attention of Hayley Williams

very very excited to somehow hold this huge sign at the barrier for the whole concert in London again and reiterate how extra we are @yelyahwilliams @paramore !! pic.twitter.com/qLogu6GUuE

11. OK even though this one isn’t technically a concert sign, this person had an hour-by-hour countdown for a My Chemical Romance show in 2007. That dedication was enough to get them a spot on this list.

This was my hour by hour countdown to the 2007 My Chemical Romance concert. I miss them. pic.twitter.com/K92j8BMNcK