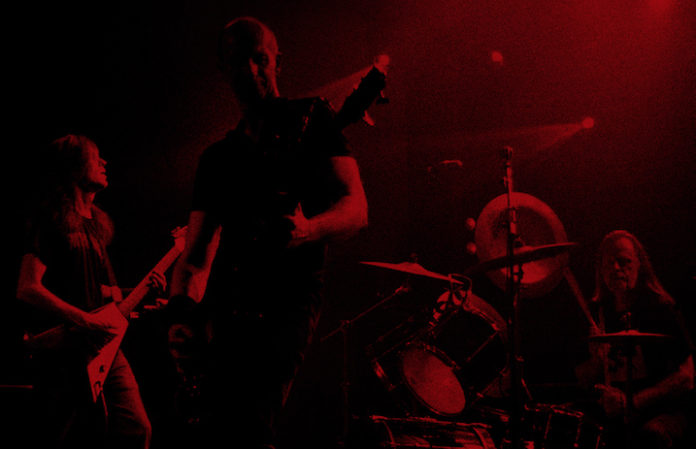 When the Virginia/North Carolina math-metal outfit LOINCLOTH entered the scene back in 2000, heads in the underground swiveled so hard they threatened to pop off their bodies like champagne corks. The dynamic sonic crunch of guitarists Tannon Penland and Pen Rollings against the rhythmic algebra of bassist Cary Rowells and drummer Steve Shelton (both of Confessor) generated a filigreed aural menace that was embraced by metalheads as well as indie math-rock types who traded their ironic classic-rock tees for shirts with pocket protectors. Rollings would exit the band in 2009, leaving the remaining members to record their 2012 debut album, Iron Balls Of Steel, where half the tracks clocked in at less than two minutes and were glorious in their regimented yet complex attack.

Now, eight years since the release of Iron Balls, Loincloth—Penland, Shelton and guitarist Craig Hilton and bassist Tomas Phillips—will have their new album, Psalm Of The Morbid Whore, issued by the mighty Southern Lord label Sept. 29. And to celebrate its release, the band are… breaking up. Citing the geographical space between members (approximately three hours) and choosing to remain friends instead of pushing the kind of psychic investment it takes to make this kind of music, there will be no touring or farewell shows. Yet in a world of streaming services and free downloads, Southern Lord is still committed to getting Loincloth’s algorithmic fury out into the world without much commitment from the band.

AP is downright stoked to premiere “Ibex (To Burn In Hell Is To Refine)” from Psalm. The track is unusual for Loincloth because not only is it of epic length (just short of eight minutes on an album where the bulk of tracks never get past three), but it also finds the band experimenting with atmospheric vistas along with their pneumatic tightness. Have a listen and check out what Penland has to say to Jason Pettigrew as the jovial guitarist navigates music, art, intention and mental health with the same kind of deftness his band has conveyed in their limited output.

Loincloth has gotten a lot of love from interesting quarters, particularly the math-rock legion of indie rock, the underground metalheads who were looking for new strains of heavy and people into technical things. People who would never hang out with each other were somehow diverted into this sonic tributary of Loincloth.
TANNON PENLAND: I do realize how niche [our music] is. When you’re doing it, you’re simply following a path. You stand away from it and listen to the chatter around it, you discover a small audience of a wide confluence. I don’t know what that is. In some instances, there is an element of tech—that’s mainly being generated from Steve. He’s a drum monster; I’m a guitar player who is nowhere in that league. I can think that way, but I don’t have the technical skills, nor do I aspire to be a guitar god. Steve doesn’t aspire to be a drum god, but in a lot of ways, he is. At its core, there is something inherently meat-headed about Loincloth. Something inherently primal. When Steve and I started this, we agreed it had to be punishingly heavy. It’s a difficult beast to characterize, and as a result, it’s a difficult audience to characterize.

I feel like a snob insinuating it, but I feel like a listener with 40 different Metallica shirts would approach your band and react like a dog eating peanut butter.
[Laughs.] Or a hat trick. Like, people perceive [our music] as this clownish thing. I know exactly what you mean, yet the funny thing is that it’s really a metal conversation that’s being had. There are other reference points, as we’re all influenced by various different things. At the core of Loincloth is metal having a metal conversation. Some of those influences even look back to things like Metallica and Exodus, Destruction, Trouble, Mercyful Fate, Mekong Delta. It moves in such a strange way that audiences can’t figure out how to bang their heads to it. [Laughs.] And we’ve been hammered with that kind of criticism. [Adopts Southern drawl.] “Why can’t these boys settle the hell down and play a song?” [Laughs.] Well, it is a song, we’re stepping outside a certain convention to achieve that composition. But I get it: It’s not a nice flavor.

“At the core of Loincloth is metal having a metal conversation.”

I have this theory I call The Proud Bedwetter. It posits that the person who has a bedwetting problem thinks you’re the loser because you don’t have one.
[Laughs.] Please put that in the interview! It’s absolutely true. But one thing I do like about Loincloth is there is a very small faction of fans moved by Loincloth who are very distrustful of metal, in general, and Loincloth has been a gateway for them. They understand “metal” is not exclusively Metallica, Slayer or Norwegian black metal; [Loincloth] doesn’t come with the tropes of the genre. But I love the forum: I can point people into metal at whatever stage and point them into stuff that is off the beaten track but still be considered “metal.” But not humorlessly: Having a furrowed brow and a laugh at that same time can be difficult and can come across as snobbery. Or stupid. How you walk that line is an interesting space. I don’t know if Loincloth actually does that—but it does for me.

“There is a very small faction of fans moved by Loincloth who are very distrustful of metal, in general, and Loincloth has been a gateway for them.”

I like the aesthetic of your songs are complex but really short. Is that a creative choice or a mental-health consideration?
As with all bands, you’re looking for a way to reinvent how you compose. In Loincloth’s case, a lot of things people mistake as tech is actually taking a singular riff, putting dynamite under it and blowing that riff up, allowing the piece to fall and then working with those pieces. I don’t know if it would be fair to say hardcore directly influences that, but it does share that space of quick bursts: Get in, get out, cut the fat. And then there’s the challenge of how to create a musical narrative with no leads, no vocals and all rhythm. That’s the other side of Loincloth: It’s really one big drum. It’s a pretty fucked-up drum, but it’s a drum. There are so many variables when you tear a riff apart and you need to pick a path, and shorter is more impactful. But we do get antsy, and we do have short attention spans when we write this music. It can make you antsy in the middle of it. There are so many tendrils.

“We do have short attention spans when we write this music. It can make you antsy in the middle of it. There are so many tendrils.”

The track we are debuting, “Ibex,” feels like the total antithesis of what you built the band on. Close to eight minutes, the complexities are there, but there’s texture and atmosphere, carving out space to create vistas.
It’s a very non-Loincloth thing to do. This song is about a different kind of patience, what it is to lay back into something. To be surrounded by it, than just constantly turning corners. And because the conclusion is so textural, and the sound design, I think those things participated inside the track. It’s something we’ve been trying to achieve for a while: How do we breathe differently inside this music? That’s what we shot for with “Ibex.” I think it will make some people laugh—the ones who are used to a minute-and-a-half’s worth of explosions.

Loincloth are building upon their previous work, going into different directions, redefining themselves—and then celebrating the release by breaking up.
[Laughs.] That is correct. We are ending it. Sadly.

This band has been woefully under-recorded in the time it has been around.
[Deep sigh.] Yes. We’ve been on our journey with this, and it is remarkable that we’ve been a band for as long as we have and this will only be our second full-length release. That is where life has taken us, and it’s at the point where it’s necessary. To be diplomatic, bands can be very difficult. This has been a long-distance project, people are getting older and it’s been too difficult to organize at the consistency that is required to play this kind of music. I’m super-happy we were able to get this record done. A lot of this material was completed several years ago: We recorded six of these tracks two-and-a-half years ago, and we didn’t like how they turned out. We ended up re-recording them and three new songs.

I’m saddened by it. I was looking forward to doing some of the things we planned on doing, but we ran into difficulties that were difficult to solve. In order for us to stay friends, we decided to end it. Bands can be pressure-cookers, and that’s not the journey I want to have. It’s all about being inspired and swimming in those heavy spaces with people I admire. And all those guys I do really admire. I want to keep it that way, and I think they want to, too. The incredible Southern Lord are behind the album, and I couldn’t be happier. I love that label. Did I answer anything or did I step all around it?

You stepped around it a bit. What I get out of it were friendships worthy of preserving, and real-life obligations that need attention. Then I’m thinking maybe a bunch of dudes shouldn’t be crammed in a van for six weeks for long drives and then playing an hour’s worth of complex music. Nobody in this band is 22, looking to meet girls and “shred all night long, dude.”
True. There have been internal dynamics that have been difficult to overcome. When you look at your life, your relationships, what you’re doing and what you’ve done, this is going to be more catastrophic than what it’s worth. I think we’ve done what we can do with it and we need to be happy with that.

But the fortunate thing when you’re in a band like Loincloth is that you don’t meet girls. [Laughs.] That’s never a problem. alt 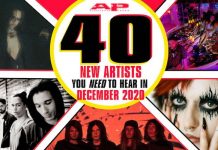