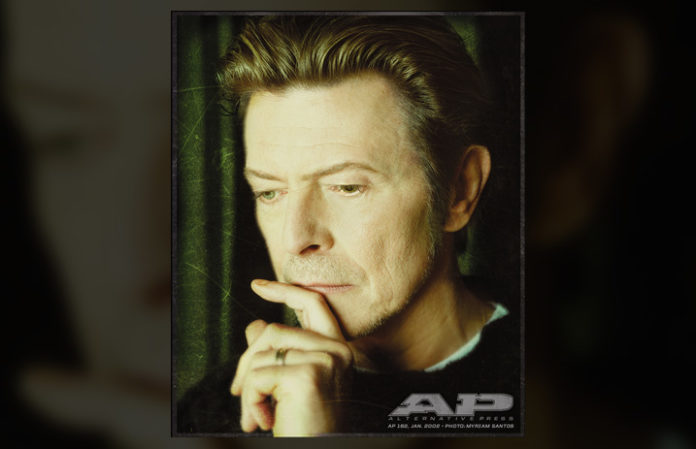 The following interview was conducted Oct. 23, 2001, for an album preview for Alternative Press, which named Bowie's Heathen one of 2002’s most anticipated releases. The phone interview left me with considerably more content than the brief assignment required, but since the discussion revolved around probes concerning the sound of a then-unheard album that the world would soon hear, the transcription remained spooled away on my hard drive for over a decade. Until now.

I revisited the transcription (only lightly edited here for clarity) and realized I’d caught Bowie at an interesting time, mere weeks after his adopted hometown had been rocked by the Sept. 11 attacks, and mere days after he’d performed two songs at The Concert for New York City, entertaining the local ladder that protected his family. In essence, there was more of human interest to the conversation than I'd remembered.

So… 15 years after the fact, here's my “lost” Bowie interview regarding the making of Heathen. It was the start of his in-studio reunion with longtime producer Tony Visconti, a relationship that continued through to Blackstar, his latest and, sadly, last album (barring more surprises, which are all too possible, knowing Bowie).

His inspiration on countless artists and fans cannot be overstated (this magazine, for one, would likely not exist were it not for his influence), but it’s perhaps his final artistic statement that provides the biggest lesson—do what you love to the best of your ability, taking risks at every step, until your very last breath.

I guess your performance went well the other night, judging from the reviews.

The audience was really quite amazing. It was quite an extraordinary event to have done. And I guess because I’m in lower Manhattan, not that far away, I felt duty-bound to do something.

Was it more of an emotional experience because the beneficiaries were in the audience?

It was, because my local ladder were there, and I knew that. I’d walk past them with my little girl every week, so we kind of know the guys down there. And they lost 14, or something like that. So it was an emotionally impacted thing to do. I think everyone was great. They really knocked themselves out. It was a real… I don’t know, it was a very chummy gig to do. It was a nice gig. The same kind of feeling as Live Aid way back in the ’80s. It was different doing it for people you live around, or who live in your own community, than doing it for people in another country.

How is this affecting your music for this new album? Have you written any new tunes since Sept. 11?

No. We’d pretty much gotten down all our tracks before. I’m recording with Tony Visconti. Which is exciting. The nucleus of the band is Matt Chamberlain on drums. He’s got to be one of the most inventive drummers I’ve worked with, in the way that he was creating a lot of tapes and loop things that we were throwing into what we were doing. It’s just a great way of working. And his choice of percussive instruments is just a scream. There’s lots of dustbins and saucepan lids and bits of old metal he’s found and hacksaw blades—just the most incredible collection of things he hits. He’s so solid.

And then we’ve got David Torn on the majority of guitar, who I’m also a huge fan of. And Tony Visconti, primarily on bass and few other things, like recorders and things like that. A lot of the other stuff I’m playing myself—nearly all the keyboards, some guitar, saxophone, Stylophone, synth work, programming like a Roland 707 and stuff to use as loops for Matt to work against. Sometimes we’re trebling up on loops.

What inspired you to roll up your sleeves and play that much on an album again?

It wasn’t a pre-thought-out thing. I had done advance writing on this album. I’ve got prettymuch 20 to 25 pieces that I really wanted to start working on. It’s when I started playing them in the studio that Tony and I took out five or six days of putting down our ideas on how these things should shape up. I was playing a lot of the parts myself with Tony playing bass. And it just felt right, the way I was playing them. It’s just that my work sounded better in terms of what I needed to have done. It has a sound. I just have a feel for those particular kinds of things.

Pete Townshend came to the studio the other week. And his overall comment was—and this is because he liked the album—he said for him it was like Franz Kafka meets Ed Wood. Which I thought was an immense compliment. I thought, Yes! That’s exactly what I think it sounds like.

Was that because you happened to be wearing a dress that day?

It was the mohair that did it. [Laughs.] But I really got what he meant. There’s a kind of handmade quality to it that I’m really enjoying. And it does kind of harken back to… only in that way does it harken back to what I’ve done before. Diamond Dogs and Low are very different albums, and not even remotely similar. But that element of handmade is within the two of them. And this one indeed has that same quality of handmade. But again, it’s absolutely… I couldn’t compare it to any work that Tony and I have done before. It definitely is a sideways move.

Those are very different albums, but at the same time, they’re not very optimistic albums.

This one probably has a spiritual sense of positivism about it, although—and I’m sure I’m not the only artist that this has happened to—but there are quite a number of lyrics on the album that just… they just dropped us after Sept. 11. There were things that were so, kind of, appropriate for that particular thing that happened. But again, I think a lot of artists are going to be finding that’s happened to them.

You’ve had that sort of prescience in the past. Did that unnerve you at all?

It scared me more than anything else. The immediate thing one is concerned about is one’s own family. The first thing we did is evacuate Uptown a bit to get out of the way of the Ground Zero area. But two or three days later, they insisted to go back again. They’re pretty brave about the thing. But, yeah, I look at the lyrics or hear the lyrics in a very different way than before.

In your early work you had all these apocalyptic images…

Yes. I think they were probably pessimistic without much spiritual life to them. I think that probably the difference is that this one has a way… well [sighs]… I would have to qualify that… there’s a lot of spiritual doubt on this album as well.

Does it resolve on a positive note?

I don’t think so. I don’t think I ever resolve anything on my work. There are inevitably a series of questions in as much as anything else. And they try and capture an atmosphere that I’m living through to a certain extent. And I think in that particular way this album is an unqualified success. I’m very pleased with it in that way.

Have you written a follow-up to “Kooks” for Alexandria?

[Laughs.] Not for public consumption. I must say I’ve written a brand new tune to “The Wheels On The Bus Go Round And Round.”

Any lyrics on the album that stand out for you?

Yeah. [Laughs, knowing he’s going to withhold the info]. No, I wouldn’t want to do that at this stage. Also, I wouldn’t want to force the thing too much, “Good God, these were written before the 11th.” I’d like the album to be viewed much more as a whole than identify a couple lines and have those lines become key lines. ‘Cause I’m not sure that really is the point of the album.

It sounds like these songs were written more bedsit-style than you have in recent years, where you were kind of working as you went along in the studio.

Exactly. Very little improv in that way. They were pretty much cut and tailored before I went in. But, of course as I always do, I gave the musicians quite wide berth. I gave them a leeway to work and interpret the stuff as they were hearing it. They’re pretty structured in terms of their chordal progressions and the route they’re going to take. I had a pretty firm blueprint of exactly what all that should do. And that was pretty much written out, as far as what are the chords and the key riffs. But I gave David and Matthew free reign to provide the kind of atmosphere that they felt appropriate for the piece we were doing. It’s just a great way to work to ask for that kind of creative generosity from musicians you’re working with. And those two guys are just great, and they gave back a lot.

And how did working again with Tony come about?

The last album we physically worked on in a big way was Scary Monsters. We’ve actually talked about doing this for a number of years now, but I didn’t feel the opportunity and the material was absolutely right for what I knew I could pull out of him. I usually work with people and I know what they’d be good at doing. And there was just this certain series of songs that I knew Tony would really get behind. And to have him work on these particular songs was the right chemistry at the right time. Sometimes you have to be patient until that particular kind of creative window comes up.

At the same time, you’re an artist who doesn’t like to backtrack.

Was that a tough decision, then, to bring someone in who’s had such an impact on your previous work?

Not really. Because, in a way, nothing that Tony and I have really done together—with the possible exception of the three Eno albums—but they had a similarity only by virtue of the kinds of people that were working on them, more than anything else. But nothing else that we ever did together has sounded the same. The diversity of material from Young Americans to Low to Scary Monsters, it’s all very different stuff. And I just knew that neither of us had the patience to re-create something we’d already done before. So I knew that whatever we did would be pretty adventurous and fairly brave.

Since he knows you so well, is he more likely to argue a point he feels strongly about?

Oh, absolutely. Though that hasn’t actually occurred on this one. We’ve been in absolute sympathy with each other’s views on what exactly we were doing here.

So, will you tour this album?

It’s looking good, if we can find something that doesn’t fly [to travel in]. [Laughs.]

You were never a big fan of planes.

[Laughs.] Less of a fan now than I was a few weeks ago. ALT