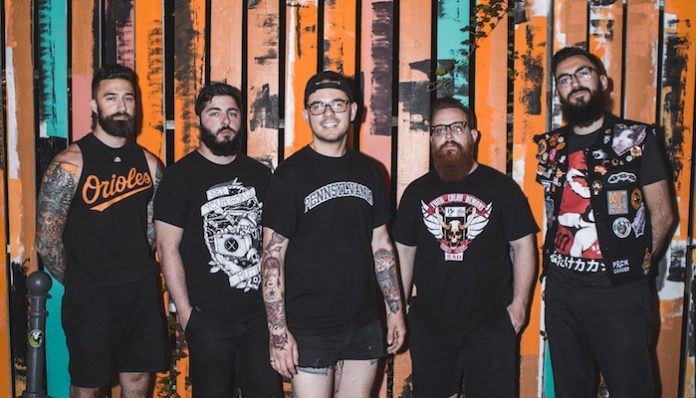 Pittsburgh-based pop-punk five-piece Lotus Kid are teaming up with AltPress to share a fiery new video for “Self Worth.” Taken from the band’s latest Wasting Away EP released in June 2018, the track homes in on heartache while still maintaining the importance of moving on.

Vocalist Mike O’Toole pulled the inspiration from his own tumultuous relationship. The frontman based lyrics on his partner of seven years cheating on him with his best friend and former drummer.

“[The song] is about my reaction to hearing I was cheated on toward the end of a seven-year relationship,” O’Toole shares. “Although I was giving more time to playing music than to my partner, I felt blindsided. I was completely dumbfounded it could ever happen to me.”

The track came together for the band—O’Toole, guitarist/vocalist Stephen Shriane, guitarist Zack Ethridge, bassist/vocalist Doug Kirkwood Jr and drummer Jess Scutella—with the frontman stating it “pretty much wrote itself.” The pieces began to fall into place during the first writing session without the unnamed drummer.

“During our first writing session without him, our guitarist Zack sat down at the kit while I noodled on a guitar,” O’Toole says. “Fifteen minutes later, ‘Self Worth’ unintentionally became a song. I was just venting lyrics on the fly as if I was having a conversation about how my life was going.”

Just like the song, the video took shape with videographer Zac Bianco on as director. Set against muted tones and fire-scorched messages, the band wanted to focus on the song’s dark and gloomy feel. Despite this, it was also important to give hope.

“The video reflects on how dark my world was for years after the incident while underlining that I’m still here doing my thing,” O’Toole says.

The latest video follows previous releases in “Heavy Minded” and “Tiny New Bedroom.” Check out the new video for “Self Worth” below and their full Wasting Away EP here.

With more than a year passing since Wasting Away dropped, the band are already putting in more work on some new songs. They headed to Hopatcong, New Jersey, to team up with Crime In Stereo’s Gary Cioni (Sorority Noise, Free Throw, Grayscale) at The Barber Shop Studios.

While no set music release plans have been locked, Lotus Kid do have a handful of upcoming dates this month. Among them is the band’s third annual Halloween show, Punk Rock Halloween Party. Held in their hometown of Pittsburgh, the band will be joined by Rookie Of The Year, Another Cheetah, Someone Just Like You and a reunited Paper States.

The band will be kicking off 2020 with a bang with a support slot alongside fellow Pittsburgh pop-punkers Punchline. While dates are still pending, they’ll also be embarking on a Northeast U.S. and Canada tour in March and April.

More information and tickets on all upcoming dates is available here.

Do you remember when Demi Lovato played Warped Tour?

10 canceled Hulu shows that should be picked up again

These cannabis strains would go great with these 10 music genres