Machine Gun Kelly opens up on the emotional catharsis ‘Hotel Diablo’ brought him, his sixth EST Fest and more.

It’s halfway through the second and final day of EST Fest 6 when Machine Gun Kelly sits down with Alternative Press, and he’s wiped. Some may assume this is due to traversing the playground that is Ohio Dreams where the rapper was spotted doing everything from playing basketball and football with fans to joining in to help DJ the dome afterparties with Emo Nite LA and more. But the source of the exhaustion is rooted much deeper, and its name is Hotel Diablo.

“The energy that I gave this album, it still has it coming back inside me,” he shares hours ahead of a headlining set where he’ll be playing the record in full. “I think when you choose to release those truths, you fill them with other things. I’m like the giving tree after you chopped all your branches off, and you’re just giving everybody everything, and to be honest, I feel like I’m sitting on a fuckin’ stump right now.”

Now four albums in, Machine Gun Kelly has never shied away from giving it his all. Surrounded by friends, fans and literal family, he headed out to Butler, Ohio, for his sixth EST Fest. With admission wristbands reading “Welcome Home,” it’s clear this is a festival unlike any other. 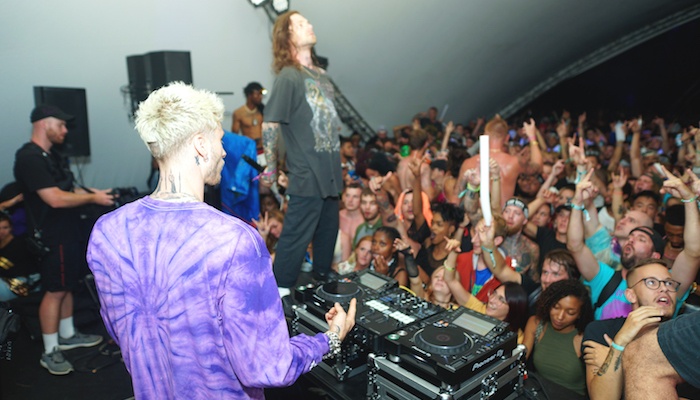 Cars with plates from Nebraska, New York, Illinois and even Ontario filled the campground parking lot. Adorned with painted lyrics, bumper stickers and decorative lights, each fan pledges their loyalty to both MGK and his EST movement. With tents and campers decked out just as impressively in a communal setup, the annual two-day event resembles a family reunion more than a festival.

Stationed nearly dead center between Columbus and Cleveland, the festival grounds require quite the trek. With spotty cell service and cornfields lining the roads, making your way to Ohio Dreams is a commitment but one Machine Gun Kelly and his team certainly reward.

Offering up a sneak peek (and taste) of his 27 Club coffee shop opening, album-inspired art installations and playing Hotel Diablo front to back, a mutual understanding is traded between MGK and his fans. If you’re willing to make the trip, he’ll give you everything he’s got.

Read more: Machine Gun Kelly built EST Fest on a movement much bigger than its lineup

“There’s a reason why I chose to do it one time, in full, at this place and nowhere else,” he says of the then-upcoming performance. “This is like, you really gotta drive out. [It’s] almost representative of that intro track on the album, [“Sex Drive”], where you’re entering Hotel Diablo. You really have to take a journey to get here, so you can only come if you really wanna get here. So, if you find it, I’ll give it to you.” 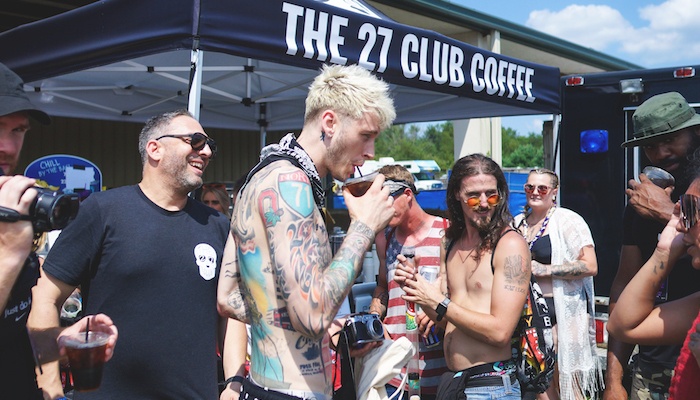 With the opening track’s minimal lyricism featuring repeated usage of the hook “Come and find yourself” (and a Cara Delevingne cameo), the rapper’s reference fits perfectly. For those heading to the forest each year in search of that deeper connection among a collection of fellow fans, MGK definitely delivers.

“Everything is just a metaphor in this campaign,” he explains. “[It’s] something to make people think and dive deeper, like ‘Why did they do this? Why did they do it like this?’ These are all things that have answers. It’s not a coincidence.”

Much like his summer tour, MGK took to the stage Saturday night with first track “Sex Drive” backing him, kicking off the full album experience. He played through “el Diablo” and “Hollywood Whore” before bringing out the first guest of the evening, Naomi Wild, to enter new territory on “Glass House,” the first of many Hotel Diablo tracks to make its live debut. 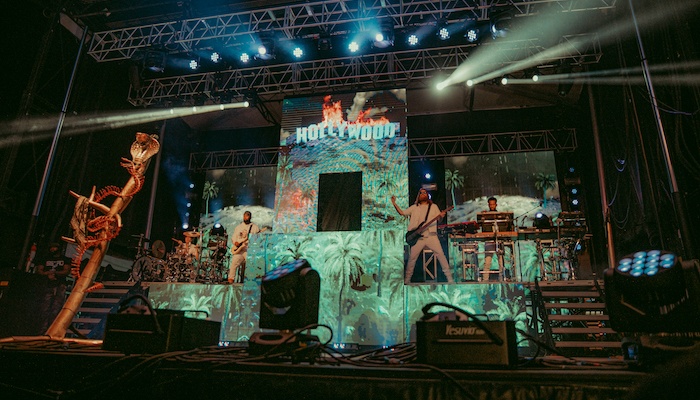 “I actually wondered why I don’t have any butterflies like I usually do before every fest show, especially because we’ve literally never performed 80% of those songs onstage,” Machine Gun Kelly explains. “There’s a part of me that’s like, even at soundcheck, one time, we looked around, and we were like, ‘Oh, I think this album is just inside of us. This one, there’s nothing foreign on this one that we don’t know.’ It’s really in our blood, our minds and our brains. This album, I swear I’ve never had—I can’t speak for how it’s going to go, but it feels like it’s in me already.”

The night went off without a hitch as MGK and his band played through the new record, bringing out more guests in phem (“5:3666”) and his daughter, the latter of whom crushed a piñata before the rapper busted into “Candy” sans Trippe Redd. He also played “I Think I’m OKAY” without YUNGBLUD, making it up the night before by running through it twice during the singer’s set, explaining the move was dependent solely upon “Because it’s our festival, and we can do whatever we want.” 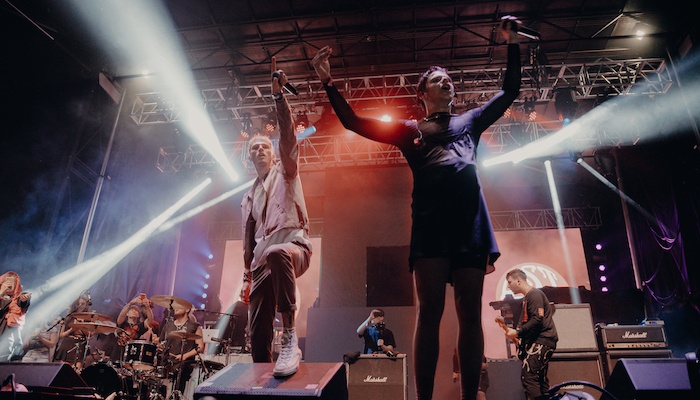 The surprises didn’t stop there as Kells reached the point in his set where he asked fans to choose their own path. Presenting “Swing Life Away” featuring Sleeping With Sirens frontman and EST Fest IV performer Kellin Quinn off his Black Flag mixtape and “End Of The Road” featuring blackbear off Lace Up, he revealed he’d play the track that received the loudest response.

“End Of The Road” rose victorious with blackbear unexpectedly hitting the stage to assist in the delivery and then a solo performance of “do re mi.” MGK returned, touching on everything from the BINGE EP (“LOCO,” “LATELY”) to Bloom (“Let You Go,” “Golden God”). 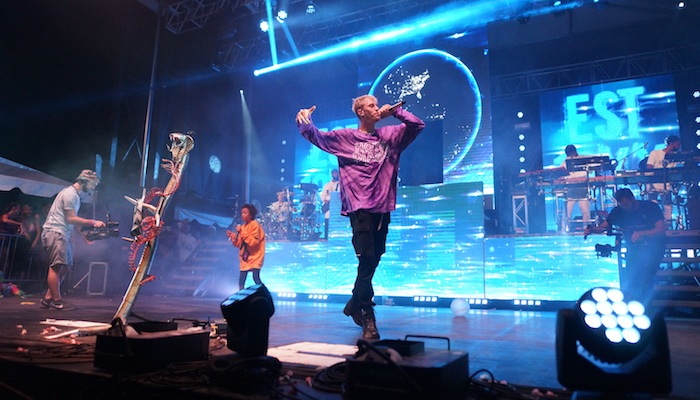 As the set crept toward completion, he recruited his daughter once again for his X Ambassadors and Bebe Rexha collab “Home.” Ending the evening with two Bloom acoustic tracks, MGK played through “Rehab” then “27.” The latter transformed the stage into a memorial, flashing images of the 27 Club (Kurt Cobain, Jimi Hendrix and more) and equally as premature losses in Linkin Park’s Chester Bennington, Lil Peep and Nipsey Hussle.

Drawing the metaphorical curtains, Machine Gun Kelly and his band proved EST Fest is a home for anyone who will let it be.