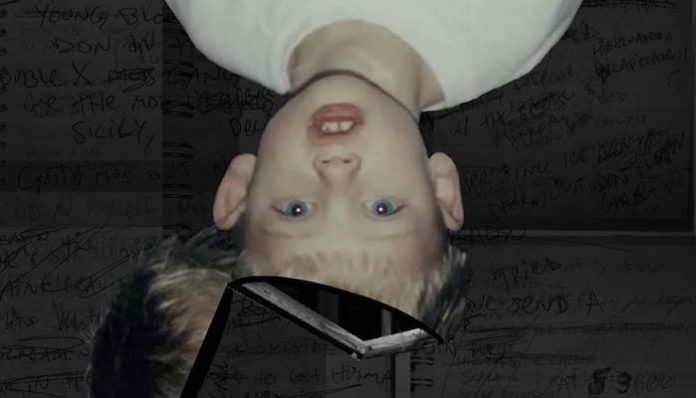 With a week since its release, Machine Gun Kelly already has a lot to celebrate with Hotel Diablo. The album topped the iTunes album chart, and latest single “Candy” snagged 1 million views in less than 12 hours (even faster than “I Think I’m Okay”).

While you may already know every lyric to that YUNGBLUD and Travis Barker collab, the rest of the album is relatively fresh, leaving plenty of room for surprises. From a cameo from his daughter to a changed lyric, here’s everything you might’ve missed on Hotel Diablo.

1. Hotel Diablo wasn’t supposed to be the fourth album

half a billion streams this year 🙏🏽 — very grateful but i didn’t give you the 4th album and i can’t stop thinking about that. i finally figured out what im gonna call it last night and im starting it all over from scratch. this one’s from the soul. 💔

Before we even get to the songs we now know as Hotel Diablo, let’s take a look back to the end of last year. Like many, the rapper celebrated his Spotify Wrapped, thanking his fans for support. However, in the post, MGK revealed he would be scrapping an album he’d been working on for at least a year, first referencing its title back in January 2018. “The original album that this was supposed to be, I erased that whole thing.” MGK told Zane Lowe on Beats1 this month. “I played it, and I got no reaction. I have a lot of honest people around me who were like, ‘Yo, this isn’t it.’”

2. The Lana Del Rey collab is nowhere to be found, but it’s not gone for good

Among the scrapped tracks was a Lana Del Rey collab first teased in October. However, fans shouldn’t be totally discouraged of that one seeing never seeing light of day. “That song lyrics-wise and sound-wise, that song can come out whenever and still be relevant,” he told Beats1. “If anything, that one’s always there, but everything else I scrapped.”

Read more: Top 10 artists proving genres are a thing of the past from Machine Gun Kelly to FEVER 333

i was playing you guys pieces of the album and giving away hints that entire #HotelDiablo tour … @Caradelevingne was the voice welcoming y’all every night on “Sex Drive” pic.twitter.com/3BUzEls3IZ

Before his album was unleashed on streaming services, MGK hit the road for the Hotel Diablo tour. The rapper kicked off each show with an electric instrumental coupled with devilish imagery. “Welcome to Hotel Diablo” was peppered in among the beats. The same instrumental opens the album as “Sex Drive” with Kells later revealing he was dropping hints the entire tour. As for the voice, it belongs to model/actress Cara Delevingne, who will be co-starring with MGK in an upcoming heist thriller titled Punk.

4. He worked with Foster The People

had fun getting weird on this record #HotelDiablo @machinegunkelly high concept trip down to the dark corners of the imagination. play it loud 😈 pic.twitter.com/LEMzQbitWQ

Delevingne wasn’t the only one to leave her mark on “Sex Drive” as Kells revealed Foster The People frontman Mark Foster was also involved. The Clevelanders met in New Zealand, leading to what MGK described to Beats 1 as an “organic” production. Vetoing adding his vocals to it, Kelly envisioned the opening like a film. “I think we should just score a movie,” he explains. “I want it to be as if you’re driving up to Hotel Diablo.” The movie mindset is no surprise given both the musician’s ever-growing acting resume and his past incorporation of film inspiration in music videos such as Snatch-like “World Series.”

5. He returned to work with the “Rap Devil” producer on “el Diablo”

“el Diablo” marked MGK’s second single off the album, serving as a reminder that the Rap Devil hadn’t gone anywhere. He achieved this not only through his flow but also in returning to work with Eminem diss track producer Ronny J. To rewind, MGK’s “Rap Devil” was a response to Eminem’s diss in “Not Alike.” A few weeks after, it was revealed that Ronny J produced both diss tracks. The duo worked together again on MGK’s BINGE EP for “LATELY” before reteaming for “el Diablo.” In the track, the rapper makes reference to the exchange of words, saying, “I keep some drink in the cup/In case anyone got some more beef, I can eat ’em again.”

6. Pete Davidson is The Count

Pete Davidson and Kelly first met on Wild ’N Out in 2013, later reuniting on the set of Mötley Crüe biopic The Dirt where they portrayed A&R exec Tom Zutaut and Tommy Lee, respectively. With two more movies on the way (Big Time Adolescence and an untitled Davidson/Judd Apatow project), SNL skit shout-outs and music video appearances (“LOCO,” “Candy”), the duo are clearly inseparable and great at collaborating. This translates to track No. 6 on the record, “A Message From The Count.” The interlude was originally intended to be serious, but Kelly revealed it didn’t pan out that way. “[The track] was me and Pete trying to think of some elaborate interlude skit that ended up being so bad it was funnier as a shit show, so I just put that on the album instead.”

7. The lyrics on “Glass House” changed

BFF and resident hype man Davidson sporadically teased fans with new tracks on Instagram posts including “Roulette” once or twice. However, one of the first to appear was “Glass House” in late March where Kells called out Davidson by name: “I’m like Stevie, I can’t see these folks/And they even got my homie Pete out here like ‘Fuck the jokes.’” One of MGK’s close friends and fellow rapper Nipsey Hussle passed away the day after the track surfaced. Following his death, MGK honored the rapper by delaying a single release and giving one of Nipsey’s tracks a drum remix. The homage didn’t stop there as MGK swapped the Stevie Wonder-inspired line for one about his friend: “This shit ugly, I was just with Nipsey, now he ghost.”

Hussle and Davidson aren’t the only mentions in “Glass House” as MGK also raps about missing Mac Miller and wishing he had a chance to talk to Lil Peep. The rapper also makes a reference to Linkin Park frontman Chester Bennington, singing, “Yeah, last time I got off the stage, I looked Chester in the face/But now he gone and ain’t no going back.” Linkin Park announced MGK as support on their summer tour in May 2017. In June, he joined the band onstage to perform “Bleed It Out” at Poland’s Impact Festival. The following month, ahead of their planned tour, Bennington passed away at the age of 41.

MGK has been open with Bennington’s affect on his life, and “Glass House” isn’t the only homage to the late singer. Shortly after his death, Kells covered “Numb,” and the track further inspired Hotel Diablo’s “Hollywood Whore.” MGK told ALT 98.7 that he plays a tribute to the LP song, which can subtly be heard throughout, but the video’s “R.I.P.” messaging in the middle is loud and clear. “We didn’t want to make it this dramatic ending or anything, and it wasn’t supposed to be for anybody else other than us letting the fans know these chords you’re hearing are me clearly giving tribute to that band and what they had done with my career,” the rapper says. “That tour that we were about to go on, for me, always is going to have a place in my heart.”

You probably did not miss MGK shaking off the Eminem “Killshot” diss in “FLOOR 13,” but his own daughter making an appearance was a little less obvious. Toward the end of the track, a whispered “Hotel Diablo” line adds to the overall vibe of the track, and it was all thanks to his 10-year-old daughter Casie. “My daughter had the ASMR “Hoooootel Diabloooo” on “FLOOR 13”—so proud,” he tweeted on release day.

10. There’s a younger photo of him on the cover for a reason

While it’s pretty obvious the album cover sports a younger photo of the rapper, the reason behind it is not so blatant. Despite people making other suggestions of what the cover should be (including a hotel), MGK told Beats 1 he was immediately drawn to the nostalgic concept. “To me, and the reason it’s patched in on the back of my head and tattooed there, is because Hotel Diablo, it was right here—it was inside my head. The real you is never the perfect side of you. The real you is the honest side of you, and my honesty in going through my earlier years and in my 20s, it was dark.” When asked if he was feeling more positively later in the interview, Kells explained, “I subconsciously wanted that as the cover the whole time because I was confronting my childhood problems on this album for the first time ever.”