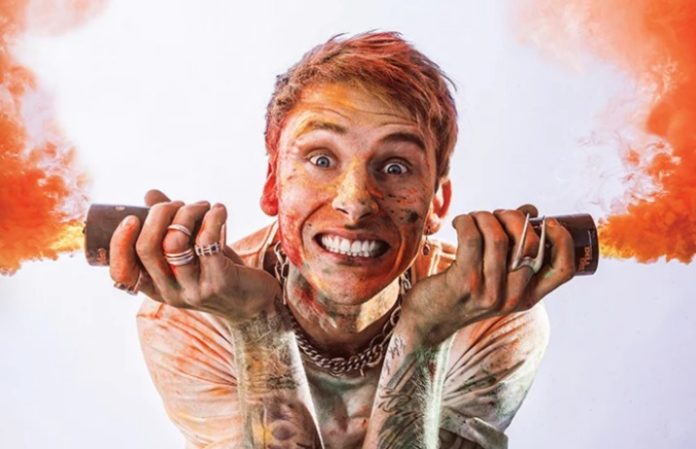 Prohibition-era gangster George “Machine Gun” Kelly often worked with a partner: his wife Kathryn, who went to prison with her husband for kidnapping. Kelly’s rapping namesake can’t match his rap sheet, but he also has a taste for collaborations. Some of MGK’s biggest hits have come alongside special guests, including the Top 10 single “Bad Things,” which paired him with former Fifth Harmony vocalist Camila Cabello. Here are the stories behind some of those on-record hookups.

“I think this is still my favorite [collaboration], because our relationship continues to this day. And me and Waka weren’t just pitching an image at that time; we were living it. We were fuckin’ insane.”

“I remember DMX walked in the studio, and I was standing on the table, rappin’ some old DMX song. And DMX was like, ‘It’s gonna be a good night.’ He cracked this Hennessy bottle open and poured it on the floor, and he got down and started barkin’.

“I pitched him this vision, because we both have these dark, twisted minds. I played him this song that has a Gladiator sample from Hans Zimmer, a really eerie song. I wrote the verses in Indianapolis—I was really high on cocaine or something. This was back when I was doin’ heavy, heavy drugs. I was having heat flashes and convulsing, and I wrote all these words down. And I brought these papers into the studio, and I was flashing back to that day to keep up the intensity.

“We got done at nine in the morning, and we went to Denny’s. And DMX wasn’t feelin’ how the woman was mopping the floor, ’cause she was serving us and cleaning the place. So he got up and started mopping the floor and takin’ people’s orders. It was the greatest day ever.”

“We had a mutual friend, and they left me tickets for a show. They saw me in the mosh pit during ‘Unholy Confessions,’ and they gave me a shout out. Later they invited me to a penthouse party at the Palms; we were drinking and laughing, and the sun came up. It was just a good vibe. And I told them about this track I wanted them to be on. So Slim [Allen, keyboards] and I flew out to California, and we drove down to Matt’s house. I actually recorded Matt’s vocals myself. It was probably the most ear-piercingly loud thing I’ve ever heard, when he did that scream.”

“A friend of mine, Earl St. Clair, was staying with me in LA. He wrote this beat and this hook with this guitar line, and he said, ‘You should rap on it.’ And I said, ‘It sounds like we’re trying to be Kid Rock. That’s kinda like we’d be posers.’ So we trashed it.

“And I don’t know who the fuck went in the trash and picked it up and sent it to Kid Rock. But Kid asked his son, ‘Should I do this song?’ And the kid was like, ‘Fuck yeah! Kells is tight.’ So he did the hook and sent it in, the night before the album was supposed to be due. Everyone brought up ‘Bad Motherfucker,’ and I was like, ‘It’s over; don’t even fuckin’ bring it up.’ And they said, ‘But what if we told you that Kid Rock is on it?’ And they pressed play, and he was on it. And I wrote my verses in like five fuckin’ minutes. And now it’s legendary.”

“My ultimate vision was to write a new-age love song. Something that people are actually feeling and doing. ’Cause I know damn sure that the 1950s and ’60s version of love, with a husband and wife, two kids and a white picket fence is not our version of what love is.

“I was just at a show in Vegas the other day, and this couple was dancing using these ribbons and tethers, hanging 50 feet in the air. And there would be moments this girl would have no harness, just the grip of this guy’s hands keeping her from falling. And maybe that’s what our version of love is. We’re just so used to these candyass love stories that aren’t even happening now; I just wanted to do something that is an edgy, darker, more sexual, more culturally relevant love song.”