I just walked out of an intimate, private community meeting at my hometown venue, the Flint Local 432, with a very special surprise guest: Macklemore.

Before playing the Fox Theater in Detroit tonight, he made the drive an hour north to follow suit with other high-profile celebrities such as Snoop Dogg, Russell Simmons and Rev. Jesse Jackson—but he took a different approach. Instead of asking for the media to show up and make it loud to the world that he was passing out water in our broken town, he came to a small club, asked for no media presence (I was there as volunteer at the venue meeting beforehand) and wanted to hear what the people of Flint, Michigan had to say.

Now a lot of people looking at the headline or seeing the picture attached to this article will roll their eyes or sigh with disdain at the sight of Macklemore, but what they don’t realize is the context of what he did. He turned a room full of people who weren’t very familiar with his music and people of color who thought another privileged white rapper was taking advantage of a bad situation into an engaged group of supporters. Why? Because he was transparent, and he was real. He wanted to learn, and he admitted his mistakes during the process. Unlike so many others, he was trying.

“Are you marching for freedom or when it’s convenient?”

A line from Macklemore's new single, “White Privilege II (featuring Jamila Woods)” seemed to be the focus of our group discussion. There were a handful of venue volunteers in attendance, but the conversation was mainly for Raise It Up!, a youth organization that promotes empowerment through the arts, performance and activism in Flint. The group’s founder, Natasha Thomas-Jackson was directing the conversation as the room focused on some heavy and important subjects including privilege, race, poverty and the water situation.

Tonight was about everyone being heard. The least important person in the room was Macklemore, and he knew it. At one point Thomas-Jackson asked if anyone listened to his new single, and only a few hands were raised. This was not a room of his fans, this was the real deal.

He started talking about how as a major artist, winning awards, selling millions of albums and being white, were his privilege. Like his songs showcase, he’s passionate about human rights and, he feels he can use his privilege to make a difference and uplift others who don’t believe in themselves. It’s the fine line of standing up for something publicly and knowing someone else would be a better candidate, but society never gave them that platform. The scrutiny artists get on the internet from people assuming they are doing things for the wrong reasons usually outweighs the message itself.

Once he opened the floor for everyone else, others shared their stories and theories and raised important questions for almost two hours. One thing I hadn't heard previously was that water being donated was only going to certain neighborhoods on a regular basis. Some residents would get two cases a week while others living near and in the housing projects have only gotten one pallet total. It’s an unfortunately common tale of neglect. People from around the city have been dealing with this situation for close to two years and it wasn’t until the last few months that Flint was all over the news.

In the midst of the intense questions and exclamations from the group, a venue volunteer asked about one of Macklemore's songs, and he swiftly responded by saying we weren’t talking about his music, we were talking about real issues. We were talking about what’s happening in Flint and the water. It won some serious points with the crowd who realized this wasn’t just some PR stunt; he really wanted to understand and help everyone.

In closing, he made sure to point out that celebrities coming to Flint and doing charity work in general all have different ways of helping. Depending on their level of success, sometimes posting a selfie with the mayor can actually lead to millions of people seeing it and some of those people might donate money to a proper cause. Whether it’s self-absorbed or not, it’s using their status to get people who normally wouldn’t care at all to pay attention. His friend and Michigan resident, One Be Lo of the group Binary Star pointed out that he was the person to get in contact with Macklemore for this because he knew the rapper was a truly good person for years.

As it came to an end, we all clapped and there was a really positive energy to the room. It felt like some sort of therapy session. As everyone lined up for photos, I exchanged a few quick words with him and sincerely thanked him for caring. When he left, the rest of us kept talking about understanding the realities and importance of race and privilege of all kinds. It was very moving to talk with the people who were really struggling and how passionate they were about helping getting others involved.

There is no real solution to what happened to Flint. Irreversible damage has been done to thousands of people. Bottled water is a great temporary aid, but it doesn’t replace all of the lead pipes all over the city. Even when those pipes get replaced, families will be impacted by this for the rest of their lives. One kid asked how to actually help because things seemed so hopeless. I quickly told everyone to check out www.flintkids.org—The Flint Child Health & Development Fund deals with big picture solutions like education and specialty programs for children developing disabilities and nutrition education with ways to reduce the effects of lead.

Flint was the butt of everyone’s joke for decades, and it took a major crisis for the world to notice us again. Celebrities like Macklemore who seem to have questionable intentions can end up being great people who use their platform to make a difference. Leave your comfort zone and stand up for your beliefs. Although the payoff seems to take forever, it’s the stepping stones that build a path to a better future for all of us.

Pre-order Not Safe To Drink, a compilation of tracks from various artists to benefit the above organization 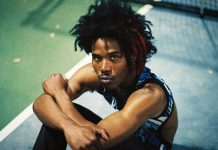