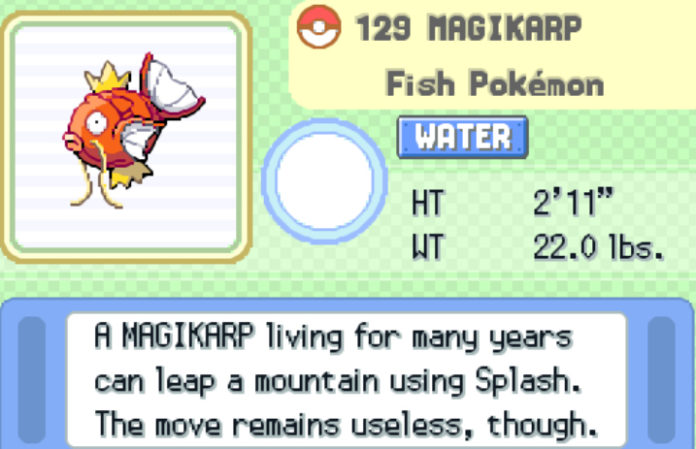 After years of fighting back against the oncoming tide of mobile games, Nintendo finally gave into the pressure created after the success of Pokémon Go and released Magikarp Jump, their latest Pokémon game for phones.

Read more: Op-Ed: Why the ‘Pokémon Go’ update was doomed from the start

Magikarp Jump is the project you forgot about until the night before it was due but still got an A on because your teacher thinks you're hilarious. This small game – at least compared to the worldwide scale of Pokémon Go – is propped up by jokes ranging from clever to groan-inducing, wrapped up in a nice bow of self-awareness.

While the options available to players are limited, this game works based off how seriously it chooses to not take itself. Since the beginning of the Pokémon franchise, Magikarp has been a punchline at best. While this game doesn’t do much to change that narrative, it does an excellent job leaning into the humor available to a punching bag, and taps into some flavor text-observant fans of the franchise have known for quite some time.

Its Pokédex listing in Platinum gave a hint to the hidden potential of this Pokémon.

Still training my little ‘karp up to jump that high, but she’s getting surprisingly close. While there isn’t a mountain to show scale here, those little green blobs at the bottom of the picture are, in fact, treetops.

The entire goal of this game is to catch Magikarp and train it up by using food, workout routines and friendship so it can jump high enough to make its way to the top of the league – Friend, Quick, Heavy, Great, Fast, Luxury, and Expert 1, 2 and 3.

Mindlessly throwing yourself against various objects seems to do the trick. Unfortunately, because this game is “kid-friendly,” the developers blocked out quite a few naming options. You can still get creative if you try, though.

Like any good mobile game, Magikarp Jump has a few extra tricks up its fin designed to kill your ‘karp – literally.

I’m still mourning my poor little fish. It was taken from this world too soon.

Fortunately, it’s not all bad. You have a few friendly Pokémon by your side who will step up and provide the support your little Magikarp needs to become big and strong.

Overall, this game is an incredibly weird, perfectly strange way to waste a few minutes on the train, in between classes, while you’re pretending to listen to your Aunt Georgette describe her recent vacation to the Adirondacks in vivid detail, or anywhere else you need a quick escape from reality.

And in case you’re wondering, yes, you can evolve your Magikarp into a Gyarados. Every ‘karp you catch comes equipped with an Everstone, and the only way to get rid of it is to furiously tap your fish until it breaks.

Once that happens, all you need to do is level your Magikarp up to at least level 20 and wait for the sparks to fly. However, this is the one instance where evolving this Pokémon to its final, usually useful form is a terrible decision. While you get an achievement and a small reward, your fish’s journey comes to an end and it’s sent off to enjoy its retirement.

My game was so confused as to why I chose to evolve my Magikarp that it crashed for the very first time.