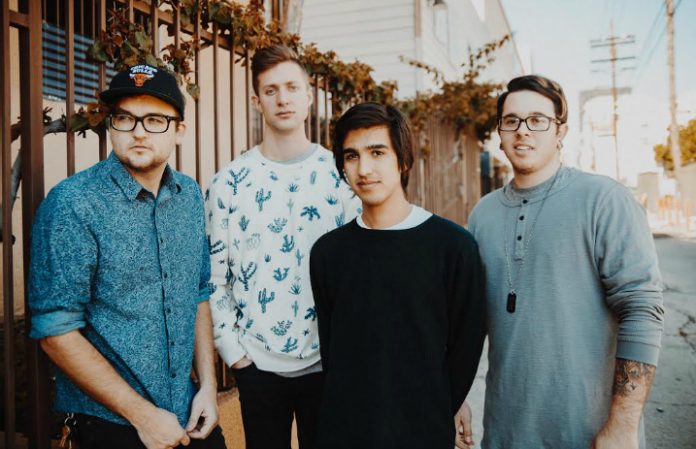 Managed by Neck Deep's Fil Thorpe-Evans, the band are making their debut today with the release of a full self-titled EP. As if that wasn't enough, the EP features the vocal talents of Real Friends' Dan Lambton.

“I was instantly hooked when I heard a couple of the early demos,” Thorpe-Evans says on what first attracted him to Gardenside. “I just felt like it was a really original sound and that a lot of people would really dig it. It's got some roots in pop-punk vibes, but I feel it stretches so much further than that. I think Jeremy's voice compliments the music really nicely and that it would make an awesome live show.”

Gardenside introduces the band's poppy-punky aesthetics—a bit different than traditional pop punk, more in the vein of Jimmy Eat World and Weezer. From the downright irresistible “Into It” with Lambton to the raw, stripped “Whatever We Do,” Gardenside have left their brand new fans already eagerly waiting for more.

Thorpe-Evans continues: “Another thing that really stuck out to me was that the songs on the EP came together really, really quickly.

“To me that meant when the band got to the stage of doing a full length and having some real time to write new music the songs could be so much better than these already great songs.”

While creating the EP, Thorpe-Evans and the band wanted someone to guest vocal on one of the songs. Once they figured out the perfect part, they had to find who would sound right on the track. Both Gardenside and Thorpe-Evans landed on Lambton.

“I've been good friends with Dan for a long time as we've toured together a bunch of times, so I gave him a call and told him all about the project,” Thorpe-Evans says. “After he had a listen, he was super into it, and it went from there.”

Lambton was “blown away” when he heard the track Thorpe-Evans sent him.

“It's very cool to have been a part of it, and I appreciate Fil reaching out to me!” – Lambton

“Fil had originally hit me up because he had been working with Gardenside in a management role to help the band grow and get the music out there,” Lambton says. “He sent me the track, and I was blown away. [I] really didn't know what to expect there to be honest.

“The EP also reminds me a lot of Splithabit, a band that Dave Knox (of the Real Friends fame) would bond over before our band had even started.”

Lambton's favorite part of the experience was recording it himself.

He continues: “It's very cool to have been a part of it, and I appreciate Fil reaching out to me!”

Gardenside was actually what sparked Thorpe-Evan's interest in managing.

“I hadn't really considered the idea of managing a project before hearing the early Gardenside demos. Myself and Jeremy have been friends a couple years now and we hang out and write music together sometimes,” Thorpe-Evans says. “I remember he showed me a couple early demos of what would become Gardenside, and he told me how he wasn't sure what he was doing with them and was considering starting a project.

“Once I listened to them, I basically told him that he would be a fool not to start it as a band because they sounded great. I helped him finish up the EP in places and just got so excited about the music [that] I really wanted to help it get out there,” Thorpe-Evans explains.

“After basically figuring out a plan for launching the band and a few other things, it all just felt very natural, and we decided I would take this role, and we would work towards building the project together.”

Find Gardenside on Twitter here, and listen to the EP below.