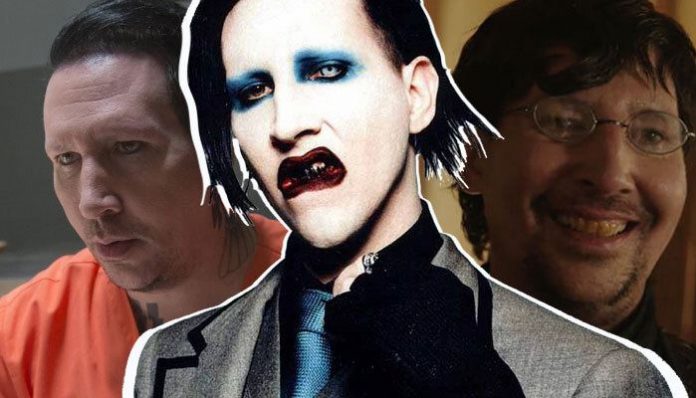 Marilyn Manson is a man of many talents, and while most people know him for his musical achievements, he’s done an incredible job of establishing himself in film and television. From major roles in TV shows and movies to guest appearances in animated shows, documentaries and more, Manson has made a major effect in entertainment outside of music.

Take a look below for the 10 best Manson appearances in film and television.

Read more: Ice-T has no idea who Trapt are as they keep trying to start beef

Clone High is a cult classic cartoon of the early 2000s, and looking back at it now, it’s like a time capsule of the culture along with the added historical tie-ins from its characters. Manson made an appearance in the second episode of the show and of course had his early 2000s look, but it’s hilariously uncharacteristic of what his public image is like.

While not technically an acting role, Manson’s appearance in Bowling For Columbine is one of his most important roles in film. The tragic Columbine shooting pushed a lot of unnecessary blame on both rock and metal bands. Manson offered a more sympathetic take on the situation that’s still regarded today when viewing issues regarding mass shootings.

The shock rocker only makes a brief guest appearance in Eastbound & Down, but it’s both wildly shocking and entertaining to see him in the show. He’s apparently obsessed with the show and has even dressed up as Danny McBride’s character while walking around in public to mess with people. When he finally appeared on the show, it was totally worth it to see him wearing roller skates and orange short shorts, even if it only lasted for a brief moment.

Jawbreaker saw a group of high school girls trying to figure out how to cover up an accidental murder from a prank gone wrong on their friend, and they use Manson’s character as a way to try to frame him. After hiding the girl’s dead body in her own bed, one of the group members seduces Manson’s sleazy, moustache-donning character at a bar to attempt to pin rape and murder on him. While it’s shudder-inducing, it’s incredible watching how creepy Manson can be when he wants to.

6. The Heart Is Deceitful Above All Things

Manson really plays the role of a lazy scumbag well, and that’s evident in every way with his performance in The Heart Is Deceitful Above All Things. The film takes on a tattered relationship between a drug-addict mom and her kids while Manson plays a slob dating her, doing some things even she can’t get behind.

Manson playing a fictitious role as himself is unsettling yet humorous. His role speaking to a newly named pope to catch up after being away in the studio seems all too realistic to how Manson would interact with a real-life pope, and while it’s a quiet, calm chat, it’s filled with hilarious moments.

4. Let Me Make You A Martyr

While there’s some contrast from the extreme shock rocker Manson came to be known for in the early days of his career, his role as a hitman in Let Me Make You A Martyr sees him diving into the more quiet nature he’s settled into today. The 2016 film offers up a restrained but captivating performance from Manson throughout its entirety.

Manson acting as himself always seems to lead to great humor as he does a great job of playing up the wild nature of his public persona. In his Californication guest spot, he’s friends with the character Atticus. While some of the show’s main figures try to teach a life lesson about the dirty life of a rock star, they come across Manson and Atticus “doing narcotics” in a hilarious exchange.

Salem is a perfect match for Manson as it deals with everything supernatural and gives him a chance to explore his acting in a role involving witchcraft and alchemy. He plays a barber with ties to the devil while traveling between worlds and performing autopsies. If that kind of character description isn’t the most Manson thing you can imagine, we don’t know what else is.

Manson’s role in Sons Of Anarchy is easily his greatest when he takes on the part of a white supremacist prison gang leader. It’s eerie how well he plays the role, but his personality shines through in showing scary seriousness coupled with dark humor. His character, Ron Tully, plays a pivotal role in the show’s seventh season, and seeing him come alive on screen means there’s definitely going to be a tense moment to look forward to watching if you’ve never seen the series.

What is your favorite role Marilyn Manson has portrayed? Let us know in the comments below.