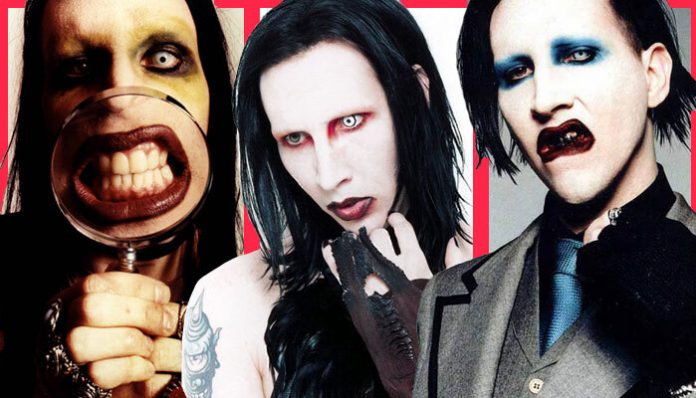 Bending expectations of gender and humanity at every turn, Marilyn Manson has served some unforgettable looks over his 26-year career. Whether it’s the grotesque imagery from “Disposable Teens” or the mature creepiness from “Personal Jesus,” the God of Fuck has presented a new shocking persona and imagery with every album.

In celebration of We Are Chaos, we’ve picked out the most iconic outfit and makeup look from every era. But watch out for those grills—they look pretty sharp.

Read more: It looks like Wendy’s is a big fan of My Chemical Romance’s ‘Black Parade’

The Portrait Of An American Family era was the most extravagant introduction to Manson’s messed-up visuals. Distorting the once child-friendly Willy Wonka & The Chocolate Factory imagery with his grotesque trademarks, it’s hard to peel your eyes off the earliest phase of Manson’s career.  The split eyebrows, sunken red eyes and haphazardly applied dark lipstick in “Dope Hat” are mesmerizing. That’s only if you can tear yourself away from the psychedelic onslaught going on around the band. 1994 didn’t know what hit it. We’re still not sure we completely understand it 26 years later, but that’s the beauty of Manson and co.

Smells Like Children EP – “Sweet Dreams (Are Made Of This)”

Perhaps the most iconic Manson look ever, his slicked, straightened black locks and bulging red eyes from “Sweet Dreams (Are Made Of This)” perfectly offset the band’s sinister adaptation of a Eurythmics classic. The starting point for Manson’s career of creating twisted covers of timeless ’80s songs, the Smells Like Children era solidified his mission to challenge all expectations of an industrial band in both sound and visuals. Check the innocent tutus and trashed wedding dresses decaying before your eyes.

Befitting the power-hungry topics covered throughout Antichrist Superstar, nothing could upstage Manson’s gruesome mic stand from “The Beautiful People.” Combine that terrifying contraption with the rest of the visuals from the iconic video and Manson’s black-lined eyes (that we’d later see immortalized by My Chemical Romance) and partially mummified costume are the least frightening of the lot. That said, with his signature odd white contact bursting from that solid black line across his face, surrounded by the kind of imagery that crafted his own American Horror Story around him. This isn’t the Manson era you’d like to bump into in a dark alley.

Transporting all the androgynous alien-like imagery of David Bowie to new extremes, “The Dope Show” brought Manson’s white bodysuit from the cover of Mechanical Animals (which later inspired Placebo’s artwork for Meds) to life, and it’s still as jaw-dropping as ever. Luminous red streaks adorn his once pitch-black hair, conveying a more otherworldly image than ever before. Manson’s makeup remains an unearthly pale beneath blue shadowed eyes and red sclera lenses. A vibrant Dead Or Alive-esque injection of color into his once-bleak visuals proved Manson was no longer an earthbound abomination. He is far more extraterrestrial than any little green man your imagination could conjure up.

The extraterrestrial era dematerialized as quickly as it came. “Disposable Teens” reinstated the truly twisted world of Manson. Introducing his legendary grills to a new extravagant budget, this far-fetched video brought a new generation of shock to Manson. In line with the Holy Wood era’s religious concepts and visuals, “Disposable Teens” brought so many memorable looks. However, one looks reigns over the rest. Our first look at Manson in a miter and red-streaked eyeliner to denounce organized religion in the most grotesque manner.

The Golden Age Of Grotesque – “mOBSCENE”

Good luck trying to make any sense out of the video for “mOBSCENE” a whole 17 years later. That mind-bending video certainly served an iconic look or two. Giving bowler hats an unexpected comeback in the goth realm, the blue eyeshadow and golden grills offset by a pinstriped suit are a far cry from the last era’s extravagance, defining The Golden Age Of Grotesque as a more sinister affair. Despite being understated in comparison, this slick aesthetic brings back echoes of 1980s David Bowie disfigured into Manson’s own template.

Lest We Forget – “Personal Jesus”

Paying tribute to goth forefathers Depeche Mode, the looks in “Personal Jesus” are as classically goth as Manson could muster. Littered with religious imagery just to raise a casual middle finger at the song’s ironic subject matter, the glitter tears coursing down Manson’s cheeks beneath white eyelashes and blacked-out eyes are one of the most memorable visuals from him in the 2000s. Of course, we’ve tried to replicate that dramatic look before. We’re pretty sure Manson wasn’t using the same dollar-store glitter as we had on hand.

Eat Me, Drink Me – “Putting Holes In Happiness”

Manson’s transformation to his own quirky rendition of corporate goth extended through the Eat Me, Drink Me generation. “Putting Holes In Happiness” in particular offered creepy Haunting Of Bly Manor-esque vibes long before the series was ever adapted. 2007 saw Manson’s choppy black layers flicking in front of a vibrant, thick red line sweeping across his eyes a la Antichrist Superstar. We still wish we had the guts to wear this look to the grocery store.

The High End Of Low – “Arma-goddamn-motherfuckin-geddon”

If you’ve only seen Manson live, you’d be forgiven for thinking the corp goth and power-hungry dictatorial imagery of “Arma-goddamn-motherfuckin-geddon” is his go-to look. With shimmering grills and a slick black suit to match his darkened eyes, the makeup looks and outfits from The High End Of Low era are some of the most understated of his career so far. Even with a less terrifying image, you still wouldn’t want to cross this powerful incarnation of Manson.

After three albums of toned-down looks, Born Villain brought a fresh Manson image in the blacklight video for “Slo-Mo-Tion.” Manson welcomed the era with one very unexpected tool—splattered UV face paint. The acidic transformation from a once-grotesque aesthetic to a neon party vibe caught us all off guard at the time. Now it seems Manson and blacklight makeup have one thing in common: Both shine in the darkness but for very different reasons.

The Pale Emperor – “Third Day Of A Seven Day Binge”

If the trench coat from the “Deep Six” video hadn’t already persuaded you that The Pale Emperor era was intended to bend all expectations of Manson’s iconic image, the smeared layers of face paint featured in “Third Day Of A Seven Day Binge” certainly sealed the deal. With layer upon layer of black-and-white paint mixing to form gray, this mature expression of Manson’s creativity burst free from beneath an upturned black collar and framed his signature gold grills, perfectly matching the demure phase of his musical output in 2015. Completely lacking extravagant props and set designs, Manson graduated from the theatrical and into the sinister. There’s nothing more dangerous than a person who looks just like any other you pass on the street.

We Are Chaos – “Don’t Chase The Dead”

Only Manson could manage to get The Walking Dead’s Norman Reedus dressed up like a 1970s Alice Cooper. A long-awaited return to more adventurous video concepts, this year’s “Don’t Chase The Dead” defines Manson’s We Are Chaos era as a triumphant comeback to unforgettable videos and iconic looks, particularly that of Manson bathing in blood. How we managed to reach 2020 without seeing that exact scene is beyond us. We’re not complaining now that we’ve seen his trademark blacked-out eyes and glittering grills submerged in fake blood… or at least we think it’s fake.