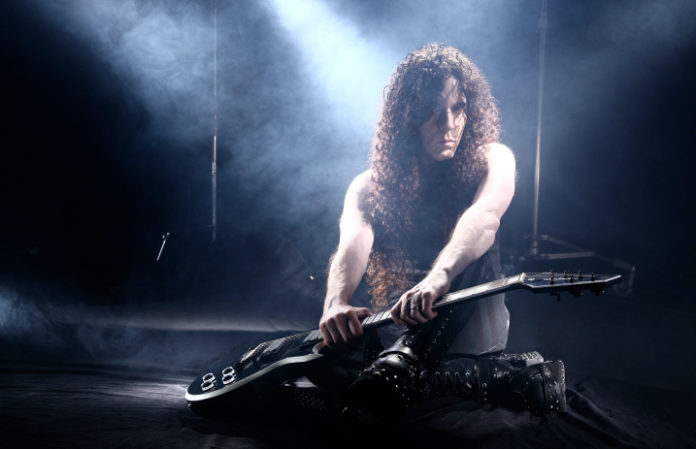 A cultural icon in Japan—Friedman has appeared on over 700 Japanese TV shows and is a heritage ambassador for the country’s 2020 Olympic games—the axeman has a special fondness for the land that’s been his home since 2003.

“Japan influences me creatively,” he explains. “More than other music, it’s personal life experiences that come into play when I create. When you’re a kid, you sound like your favourite musicians, but the older you get, the more your personality and your relationships with other people influence your music. I’ve done so many strange, non-musical things here in Japan; a lot of the things in TV that I do are things I never particularly wanted to do, but doing them has given me life experiences that I can draw on other than recording and touring.”

He might be a TV star now, but Friedman remains best known over here for his musical output. Under the name Cacophony, Friedman and guitarist Jason Becker practically wrote the code for shredding on their 1987 debut for the Shrapnel label, Speed Metal Symphony. Friedman’s 13th solo album, Wall Of Sound, is due for release Aug. 4 via Prosthetic Records. And there’s more than one reason to care about this latest record.

Wall Of Sound sees Friedman form an unlikely collaboration with Black Veil Brides guitarist Jinxx on the song “Sorrow And Madness.” The origins of this project, as both reveal, came about after the two met at a Friedman show in LA.

“I received an invite to Marty's show at the Whisky in Hollywood in late 2015, and of course I couldn't pass that up,” Jinxx remembers. “I was thrilled to get to meet him after the show and have a brief conversation. We talked, and Marty expressed that we should do a song together—the fanboy in me was beaming!”

“I liked Black Veil Brides, but I had no idea that Jinxx had a classical background and was a violinist,” Friedman adds. “When I found out, I thought I could drag something great out of him if we worked together. If he was game, I was ready to go crazy! He was totally up for it and really open to ideas—it really was a true collaboration.”

As former Megadeth guitarist Friedman outlines, it wasn’t Jinxx’s guitar skills he wanted to utilize, but rather the BVB man’s prowess on the violin. He wanted to create a genre-defying, generation-crossing monster of a track. Something that would baffle and delight both Marty Friedman and Black Veil Brides fans in equal measure.

And how they have succeeded. You probably haven’t heard anything like “Sorrow And Madness” before: Beginning with a simple violin melody before building into a gargantuan rock song that defies classification, “Sorrow And Madness” is the sound of two generations and two great musical minds colliding. Friedman might be an elder statesman of heavy metal, and Jinxx may be just another member of Black Veil Brides to some, but write them off at your peril. These are two musicians who want you to know you haven’t got them figured out.

“This song is a good barometer for the record,” Friedman explains. “I’m hugely into big contrasts, and there’s nothing subtle in what we’ve done with ‘Sorrow And Madness.’ It expands both of us—it’s something that people won’t expect, and it made us both grow so much. I’m so proud of what we’ve done on this song.”

Jinxx agrees, and feels the final outcome of the song is testament to his collaborator’s uninhibited imagination.

“Let's just say that Marty took a little violin melody I wrote and moved it to another level… to outer space!” he enthuses. “One day I sent him my idea, and three days later he replied with his take on it, and it blew my mind! If you've ever seen the movie Amadeus, it was like when Mozart sits down at the piano and plays Salieri's little ditty! It was amazing to listen to!”

Friedman and Jinxx are one and the same—both speak with a boundless enthusiasm for music, particularly the notion of pushing boundaries and refusing to conform to expectation. Yet we should hardly be surprised about this. Friedman is, after all, a man who left one of the world’s biggest metal bands to start a new life and make music on his own terms. Jinxx and Black Veil Brides, likewise, have always done things their own way; be it their music, their image or their relationship with their fans, they’re a band who have always been unafraid to stand alone.

And while “Sorrow And Madness” might not be a sound Jinxx’s fans are used to, Friedman is keen for the BVB army to embrace this side of their hero.

“I’d like Black Veil Brides fans to listen to this song and understand how adventurous Jinxx is. He’s got such an open mind and so much ability, and that’s allowed him to do this crazy collaboration. This is a grand scheme of a song—it’s an epic piece of music. And Jinxx’s Black Veil Brides music is epic like that, too, but in a completely different way. It took balls for him to look outside his genre and do something different, and do it really well. It’s a risk, but I think people will only love Jinxx more after hearing this.”

If you’re already a Marty Friedman fan, “Sorrow And Madness,” and Wall Of Sound at large, will more than satisfy your cravings for a dose of the weird and wonderful. If you’re a Black Veil Brides fan looking to check out your man’s latest work, or just a music fan curious about this seemingly odd collaboration, whether you like this song or not almost isn’t the point. “Sorrow And Madness,” Wall Of Sound and the idea of Marty Friedman and Jinxx working together are products of a desire to continue to stretch the limits of what alternative music can do in 2017. And for that ambition, we should be very grateful.