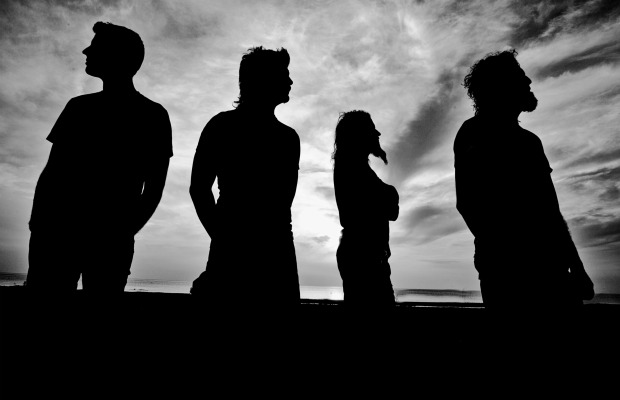 Like every major-label recording group, metal heroes Mastodon make it their business to do what they can to sell more records. Their crushing, complex and compelling new album, The Hunter, has a novel feature: an “Augmented Reality” multimedia app that takes live video footage of the listener and transforms you, in real time, into the kind of trippy, magical visual you find in their new “Curl Of The Burl” video. Technically, the bells and whistles shouldn’t be necessary, because the band have already mastered the most essential part of selling a new record: Start by making great album.

Fans will tell you the Atlanta quartet—vocalist/guitarist Brent Hinds, guitarist Bill Kelliher, bassist/vocalist Troy Sanders and drummer/songwriter/vocalist Brann Dailor—haven’t made a bad record yet. And most discerning followers argue all five LPs are all good-to-great, with The Hunter firmly in the former category, thanks to metal rippers such as “Black Tongue” or the proggy, tender, Rush-like “Creature Lives.” Still, Mastodon isn’t stagnating: For the first time, they’re not playing aggressively progressive songs, and iconic visual artist Paul Romano didn’t provide the artwork. More noticeably, they used producer Mike Elizondo—who’s worked with 50 Cent, Eminem and singer-songwriter Kate Voegele—to help the album take shape.

Dailor talked to AP about the band’s new focus, their surprising choice for a producer, how the album took shape, its hallucinogenic bonus material and the difficulty of playing their songs live, among other things.

How did the “Enhanced Reality” component of the album come about?
We were just trying to think of something cool to do for the special packages. And we weren’t sure if we should give something tangible that could sit on a shelf or do something different. We decided to be a guinea pig for this new technology. I [tried] it as soon as I got a copy of the CD, and had fire shooting out of my nose and smoke coming out of my ears.

Have any of the band members, to put it diplomatically, tried out the “Enhanced Reality” feature under the influence?
I haven’t. I’m not sure; I haven’t asked anybody. Maybe.

The album has your first artwork without Paul Romano.
We felt like [Romano] was almost another member of the band. As much as we love Paul and wanted to do another album [with him]—and I’d imagine we’ll do another [together] in the future — [we felt it was important for us] to change everything. But we decided to go with a new artist, and that was AJ [Fosik].

Does someone from the band have the sculpture?
We’ll eventually have it, but right now it’s at the Jonathan Levine Gallery in New York City, being shown with a number of other pieces he worked up for the show.

The video for “Curl Of The Burl” — what was the budget like? Right now, there are a lot of good videos that are cheap but good.
I don’t think it was too expensive. We did it in a couple days. It really just takes a good idea you can execute with as little CGI as possible. I came up with the idea, I shared it with the director and the director made it happen.

“Curl Of The Burl” video:

On The Hunter, you don’t use one narrative concept. As a writer, was that freeing for you?
Yeah. It opened up the floodgates with a lot of subject matter I wanted to tackle and didn’t see any way to shoehorn [into full-length] concepts. There’s subject matter we’re all into that we couldn’t discuss on concept albums.

Did the band feel the same way?
There were a lot of stressful things happening in band members’ lives outside the practice space. And usually, we create a very stressful environment to make music in. We’re in there all day long, and it’s up and down. And one day, we walk out of there, and we say, “We had a breakthrough — awesome!” And the next day, you’re trying to shoehorn these mathematical-equation riffs into these spaces and make it all work and jibe with the concept, and it’s really intense.

But we couldn’t make the practice space be that intense, because there was way too much going on outside. So when we started writing, we were really okay with a simpler version of ourselves. Like, in the past, maybe we’d take a riff in “Curl Of The Burl” and say, “Aw, it’s way too simple—we need to throw another time signature in there and mess that up and complicate it.” But this time, we were fine with the simplicity of it. “Is that song finished?” “Yup, it’s finished.”  “Okay, time to move on.”

You had started working on a concept before you chose this direction. Can you talk about the idea you didn’t use?
I’d rather not, because we still might use it at some point. It was cool.

Was it based on a book or a movie?
It was an original idea. At the end, there’s an underwater volcano, and the sun comes out of it. And it swallows up all these people that have been outfitted with gills.