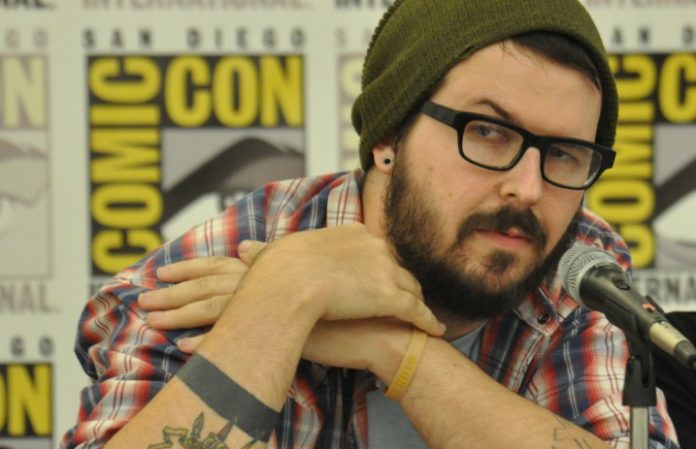 Matthew Rosenberg has written some of your favorite Marvel characters in Kingpin, Rocket Raccoon, The Punisher and Phoenix Resurrection. His background in music and running an independent record label gave him the DIY work ethic to grind it out doing creator-owned comics for Black Mask Studios, eventually working his way up the food chain to Marvel. To celebrate the collected paperback edition of his breakout, creator-owned hit, 4 Kids Walk Into A Bank, Rosenberg curated a Spotify playlist for the book and talked to AP about the importance of music in comics.

on the importance of music in comics

4 Kids Walk Into A Bank is a story about young friends dealing with some shady criminals. With the heart of The Goonies and Stranger Things, the adolescent crew tries to help their friend Paige’s dad out of some serious trouble by doing one last job for him. There’s humor, violence and a lot of crime. With any story from comic creators, the world is imagined with the help of a soundtrack.

“To me, music is crucial when I write—and not just because I spend a dozen hours a day alone, staring at a computer monitor. I'd go crazy without stimulation of some kind,” Rosenberg says. “Comics by its very nature is a silent, static medium, but it asks a lot of its readers. It asks them to see movement where there is none, to feel the passage of time where there is none, and to hear sounds where there are none. And in doing that, in asking for voluntary synesthesia from the reader, it's so important that we have a sense of what they should be sensing.”

Rosenberg says he takes influence from the lyrics, energy and mood of music to help him write different scenes.

“A fight scene written to a soundtrack of Converge or Blacklisted is going to be very different than a fight written to Waxahatchee or Elliott Smith; but either one can be perfect if you are using the energy and influence well,” he says.

Part of writing new stories and creating a new world for a comic is seeking out new, different music to set the tone.

“I grew up in punk and hardcore, so that stuff feels like home to me; but when I write, I am listening to everything from Taylor Swift to Sun Ra, Captain Beefheart to Dave Brubeck, Merzbow to Migos,” Rosenberg says. “I just try to keep myself on my toes.”

Here’s what Rosenberg was listening to while writing 4 Kids Walk Into A Bank.

“Asleep” — MAKTHAVERSKAN
“I love this band so much. We actually asked Run For Cover Records if we could use this song in the trailer we were making for the book. It just has this sleepy, ethereal quality, but still has real bite. I always felt like it made a great soundtrack for the fantasy elements of our comic.”

“Please Don’t Tell My Father That I Used…” — PET SYMMETRY
“Besides our obvious shared love of titles that are too long, I think Pet Symmetry do a great job of embracing youthful regret in a way I really admire. This is a great song about being a young fuck-up, and that just fits our book really well.”

“Capitalism Stole My Virginity” — THE (INTERNATIONAL) NOISE CONSPIRACY
“I think if you are writing a comic about bank robbery, having some socialist anthems about the evils of capitalism just makes sense. When I'm writing, I like to listen to all sorts of stuff, but having things that groove really help when you're working all night to hit deadlines. It's just the slow, steady fuel to keep you going.”

“Young And Happy!”— HOP ALONG
“Hop Along is a band I always listen to while I write. Something about Frances [Quinlan]'s voice just helps me tap into those places I need to find in my work. They are such an innovative, inspiring band who push me to want to be a better writer. I chose this song because how could I not feel attached to a song about growing up too soon?

“I Want A Lot Now (So Come On)” — THE MURDER CITY DEVILS
“The Murder City Devils are a crime band. This is a soundtrack to robbing banks if there ever was one.”

“Gray Morrow” — END OF A YEAR
“A few things about this… Full disclosure: Patrick [Kindlon], the singer for End Of A Year and later Self Defense Family, is a comic writer, and we often work together. He's also one of the best lyricists around. And since he named this song after the legendary illustrator who co-created Man-Thing, it was a no-brainer. But this song is also a really good picture of angry desperation, which is hard as hell to convey in an authentic feeling way. In 4 Kids Walk Into A Bank, we also try to convey that, and I looked to this song a lot. Also, always good to have someone bark the lyrics “You can't eat off real art” in your ear while you work on your book. Keeps you grounded.”

“Stay-At-Home Mom” — DANGERS
“‘See, I know your children/Because I’ve been your children/And us children, hopeful children/Ain’t worth the stretch marks baby.’
If there is a better verse about nihilistic youth rejecting suburban complacency written in the last five years, I don't know it. Dangers is so fucking good.”

“In The Army Now” — JOYCE MANOR
“Joyce Manor is such a good band because their pop songs always have a real nastiness just below the surface. I have no idea what this song is about to be honest, but it's this perfect mix of catchy pop sentiments and hooks smashed straight into these real dark images. It's hard to make dark and depressing be something you want to dance to, but they do it effortlessly. And that's something we tried to do in our book, too: make the depressing and terrifying feel fun.”

“Coca Cola” — PITY SEX
“I don't know. This song just reminds me of being a kid, fucking up, knowing it and not caring. It feels really relevant to 4 Kids for a lot of reasons.”

“Rejoice” — JULIEN BAKER
“Besides being one of the best songs on one of the best albums in the last decade, this song is just pure heartbreak. It's so raw and honest in a way that I would do anything for my work to be. And because of that, it's just one of those pieces of art that can command a mood. I can't put on this album and this song and not feel melancholy and introspective. That's amazingly powerful. And it's something I really wanted our book to do. I want people who finish 4 Kids Walk Into A Bank to need to get up and walk around after, to need to get some fresh air and just try and clear their heads a bit. That's what this song does for me. It's regret and optimism and sorrow captured perfectly in 3:33. It's a perfect song.”

4 Kids Walk Into A Bank is available now in bookstores everywhere and Black Mask Studios’ website.