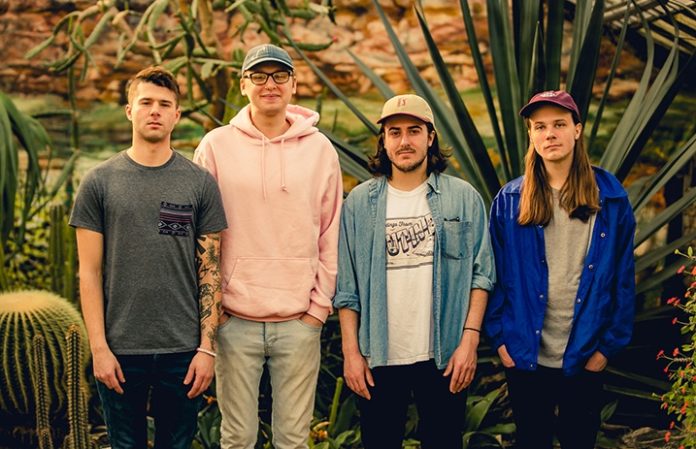 Before announcing their comeback EP last year, McCafferty frontman Nick Hartkop was living a comfortable life. He had a stable job as a special education teacher, he had gotten married, he bought a house. It was a “real world” dream.

McCafferty was an on and off project from Hartkop’s high school years, and once he found himself with a career, he decided to separate himself from music. He quit writing, packed his guitar away and attempted to cut it out completely.

“I remember putting my guitar in a closet and thinking, ‘If I don’t look at my guitar, then I won’t have to think about music, and I won’t want to do music,” Hartkop says. “It was a very sad thing to cut out completely, but the big reason was because my kids were finding the music when I was teaching. I would coach high schoolers who would find McCafferty and think it was cool to say the 'f' word to the teacher because I say it in the songs,” he added laughing.

Then, McCafferty guitarist Evan Graham texted Hartkop out of nowhere—“I remember I was out shopping,” Hartkop recalls—and said the band was too special to simply give up. That got Hartkop to start penning the band’s comeback EP, Thanks. Sorry. Sure.

“I remember sitting in my classroom looking around. I was on my planning period, and I thought, ‘If I take this opportunity, I’m going to lose everything and my life will be completely different,” Hartkop explains. “‘I’ll have a different job, my life will probably go in a very different path financially, my relationships, everything.’ In life, you have those moments where you have to make a choice, and you think, ‘If I don’t do this now, I’ll never do it.’”

So he started writing, which has always been his favorite thing. He’s a lyrics person, and he’s realized that each record comes from an honest place, soundtracking his mindset and experiences at any given point. It makes sense that 2014’s Beachboy is a fun record, soundtracking transition from college to a more carefree young adult world.

But Yarn is a statement on that post-college, post-young adulthood lifestyle and the terrifying reality of entering into the “real world.” He asks questions he never thought about when he was younger, and he touches on topics he never lyrically confronted before.

“Yarn is a very dark album because it was written in a time where I felt I didn’t know where I belonged in the adult world. Looking back at it, I had graduated college, I had gotten married, I had bought a house, I had done all these things I had thought that, by the stereotypical adult checklist, had to be done for me to be fulfilled as a person. I did all those things, and I still felt very, very empty and very, very depressed,” Hartkop explains.

“I think that was because I was doing something I didn’t really belong in. I love helping people, so I love special education because I love helping kids. I love being a person that can help people, but I don’t really mess with all the politics of it.”

Their new song, “Strain,” confronts failed relationships in a dark, dynamic way, quite different from anything McCafferty have done before. Experimenting with emotional release through instrumentals, the track’s technicality and lyrics that are both catchy and bite deep make it an album standout.

“'Strain' is about some personal failed relationships,” Hartkop explains. “It’s a song about the feeling of when you’re laying alone in a room, you turn the lights off and you’re laying in the dark, just staring up at the ceiling. You’re thinking about your breakup and what went wrong, how you could have fixed it and just that feeling of, ‘Hey, I just can’t do this anymore.’”

Listen to “Strain” below:

Yarn is set to be released March 23 via Triple Crown Records, and it’s currently available for preorder here.

McCafferty will be heading on a spring tour with Moose Blood and Lydia. Check out the full list of cites and dates below!