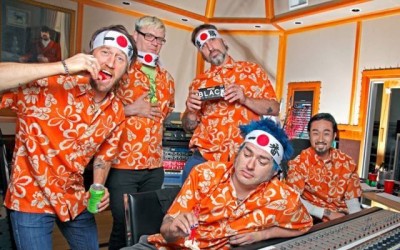 Several months after they released Go Down Under, a covers EP focusing on Australian artists, punk supergroup Me First And The Gimme Gimmes are gearing up to release an EP of Japanese-language covers. Recorded at the Foo Fighters’ 606 Studio, the still-untitled EP—“[There isn’t a title] to my knowledge, but I’m often the last to know,” vocalist Spike Slawson says dryly—is due this summer via Fat Wreck Chords.

On the release, expect to hear covers of songs such as Takuryo Yoshida’s “Kekkon Shiyoyo,” Kai Band’s “Hero” and Tulip’s “Kokoro No Tabi.” Ever ambitious, the band took great care to emphasize authenticity: A friend of fellow Gimme Fat Mike wrote out the lyrics phonetically, and then Slawson listened to the songs line-by-line. Surprisingly, even though he doesn’t really know Japanese, Slawson didn’t find the experience that difficult. “Immersion probably helped,” he says. “Even if you don’t speak German, if you’re around a lot of Germans, you know how to pronounce it; you have sort of a head start. You hear how it’s supposed to sound.”

As might be expected, recording the EP took longer than normal; Slawson says they were able to do only two songs a day. But the careful pace seems to have been worth it. “There were some Japanese folks traveling and in the city who were friends of Mike’s,” Slawson says. “They came in [when we were recording] and listened, and said at least that it was intelligible. They understood it—that’s all I was kind of hoping for.”

Naturally, the band has plans to head to Japan in September, for some festivals and club dates. Figuring out how to sing these songs live is Slawson’s next challenge. “The only way I’m going to be able to memorize [these songs] to sing live is to know what [they] mean,” Slawson says. “That may be the first step to a relationship with the Japanese language. “I’ve always been a pretty good mimic,” he adds. “I have a pretty good memory for phonetics and cadences, so I’m hoping that will click and then I’ll be able to do the stuff live, at least two to three of ‘em.”

Slawson also notes that this EP is just the second in a series of what he calls the band’s “world EPs”; ones focusing on Spanish, Italian, German and French should also surface in the future.