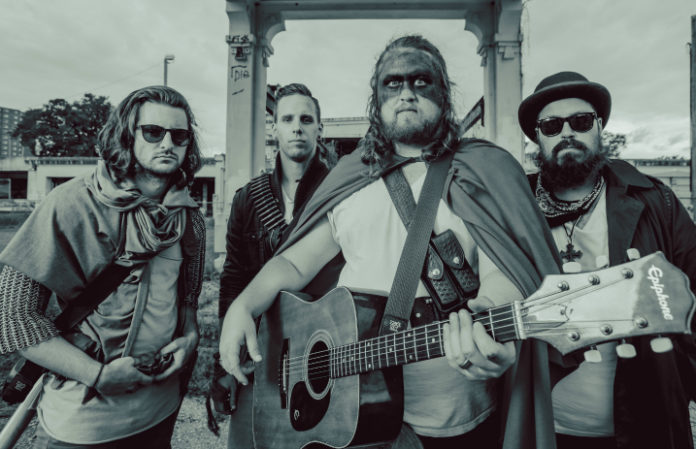 Alt-rockers Me Like Bees have teamed up with artists at Image Comics (The Walking Dead) to create music for The Realm—a new post-apocalyptic fantasy comic book series.

Each issue of The Realm will be released with a coinciding single from the band, resulting in an EP from the band and a full story for the comics.

The band is exclusively premiering the first song, “The River Divides”—something of a theme song for the entire project.

“'The River Divides' is a song inspired by The Realm about a group of people who are constantly coming to grips with a hostile new world, all the while struggling with their checkered pasts that pale in comparison to the horrors they are forced to survive daily,” vocalist Luke Sheafer tells AP about the new song. “When I wrote the lyrics, I was imagining a salty, war-ready people who lamented the world they now live in, while also pining for their former lives, as bogged down with worries, regrets and fear as they may have been.”

Check out the video for the new track below:

The first issue of The Realm will be out Sept. 13, and the second is expected Oct. 18. You can find more information on the project here.

We caught up with director of “The River Divides” music video and The Realm co-creator Jeremy Haum to talk about the making of this project.

How did you meet the band, and why did you decide to take on this project with them?
We actually come from the same small town. I’ve worked in comics for over 15 years. I always get the same question: “Why do you live in Joplin?” I’m sure they get the same thing. That question always seems to come with another secret question: “Are these guys any good?”

A mutual friend sent over Me Like Bees' first album The Ides just before it came out a few years ago. I put it it on while I sat drawing comics. I played through. Several times.

Remember, we live in a small town. We’d see one another around. Luke [Sheafer] and I became friends. We’d talk music, art and Star Wars. Mostly Star Wars, really. We’re like that.

When the Bees were about to go on tour for their There Will Be Time EP, we discussed me doing a tour poster for them. Time didn’t allow. When they got back we kept doing the “we need to work together!” thing. About a year ago, I started working on this comics project The Realm. The next time we did the “we need to work together!” thing, I changed it up and said that I was doing this comic, and instead of me drawing something for them, maybe we could collaborate on a song for the project.

Luke thought about it, pitched it to the band; they were in. They put together “The River Divides,” and it was everything I wanted it to be.

Things got really cool when Luke called and said, how about instead of just a single, we do an EP?

What gave you the idea to work with a rock band to create a comic book?
Musicians are such natural storytellers. I’ve always had an obsession with concept albums. You’d have Bowie or Nick Cave or Johnny Cash telling these stories across an album. They were brilliant. Always sparked my imagination. I was as inspired by that as any movie, book or comic story.

I always wanted to capture an element of that and pull it into a comic. When Luke from the Bees and I started talking about things, it just fit. There’s always this nervousness when it comes to collaboration. You hope it’s good. You hope you work well together. The second Luke hit play on “The River Divides” demo, I was in love. It hit everything that I could’ve hoped for. It stood on its own as a song, but then worked perfectly as a theme song for the project. It was like the opening credits theme to an HBO series or Netflix show.

Down the line we started talking about a music video for the project. As an illustrator, I’ve always just been one step removed from filmmaking. I had an idea for the video and threw my name into the director discussion. The band graciously asked me to come on and direct the music video. It was a lot of work, but I think we did the song justice.

What role does the band play in the creation of the comics?
The band just added that extra thing to this project that was missing. Seth Peck, my co-creator on the project, and I talk a lot about soundtracks for a project. It’s pretty common to put together a mood mix when you’re writing and drawing a comic. This time around we actually got to have our very own personally crafted soundtrack for the book. It’s been a dream come true.

How do the comics work with the band’s coinciding singles?
We’re releasing one new single with each issue. Five in all. While it was important for both me and the band to let the music stand as music, each song tells a little bit about the world of the comic and its characters. Once it’s done, we’ll have a sexy little EP and collected story for the book. Exciting stuff.

What inspired the idea behind the post-apocalyptic mythical storyline?
This book is a mash-up of everything I loved growing up. It has the high fantasy of Dungeons & Dragons, Lord of the Rings and pulp Conan novels mixed with the post-apocalyptic craziness of Escape from New York and Mad Max. All of that stuff in one place is exactly the kind of story I want to tell.

Is there anything else you want to share with fans about the project?
This project is exciting. Something completely different. The Realm No. 1 will be available in comic shops and digitally September 13th. Issue No. 2 and the next Me Like Bees single release tie-in will be available October 18th. Check them out.

Check out a preview of The Realm below!

What do you think of Me Like Bees' new song and the upcoming comic books? Let us know in the comments below!