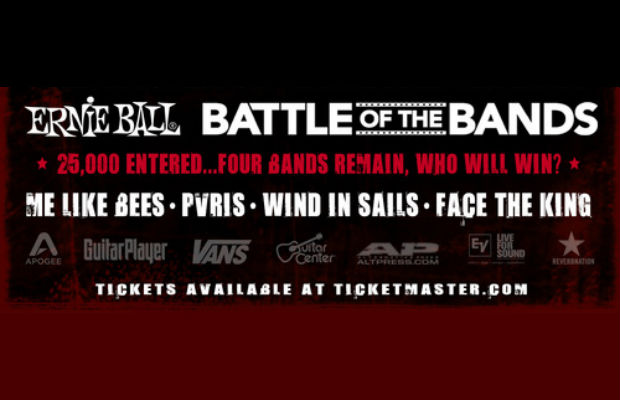 After fighting their way through a crowd of 25,000 bands who entered Ernie Ball's Vans Warped Tour Battle Of The Bands, four finalists–Face The King, PVRIS, Me Like Bees and Wind In Sails–are gearing up for one last duel to determine who wins the grand prize, which includes a 3-song EP to be recorded with John Feldmann, a $15,000 Guitar Center Shopping Spree, gear, apparel from Vans, a feature in our magazine and more.

These final four all have all won a one-week spot on Warped Tour next summer as well as gear and Ernie Ball's endorsement, and we would like for you to meet them and tell us who your favorite is.

They will face off January 17 at the House Of Blues in West Hollywood at the Ernie Ball Battle Of The Bands Showcase featuring special guests We Came As Romans. [tickets]

ROCKS LIKE: Silversun Pickups, Kings Of Leon, 30 Seconds To Mars
The four members of Face The King all hailed from different bands in the Long Island music scene before coming together to create “something larger than life,” says lead guitarist Dan DelVecchio, who was looking for a project that had promise, where he could create meaningful music and do what he loved. The band’s second EP, The Burning & The Falling Down, put them on the map: This year, they played the Rockstar Uproar Festival and the Vans Warped Tour and were awarded the “Best Band of Long Island” by the Long Island Press. DelVecchio says the band are currently working on a full-length with a sound that contains “ethereal guitar tones, big delays, a huge bass and gut-busting drums,” and are looking forward to touring in support of their upcoming release. –Aime Szymanski

ROCKS LIKE: Modest Mouse, Arcade Fire, the White Stripes
In 2009, then-recent college graduates Pete Burton (lead guitar) and Luke Sheafer (vocals/guitar) who are joined by drummer Tim Cote and bassist Nick Bynum, made a commitment to making quality music rather than getting rich doing what Sheafer calls “big-boy jobs.” The band gained local recognition in 2011 with their single about the deadly tornado that hit Joplin that year, “Naked Trees.” Never Shout Never’s Christofer Drew asked the band to join his label, Loveway Records, and tour together after their local success. The band are currently working on a music video for “Ra Ra Etc.” from their debut full-length, The Ides. Sheafer says they have been “writing nonstop since our first album released” and are excited about their plans to release an EP in the spring. –Aime Szymanski

ROCKS LIKE: Paramore, Circa Survive, Tonight Alive
“There's no gimmick with what we're trying to do,” says PVRIS frontwoman Lynn Gunn. “While we were in the studio, we kind of just decided to play what we wanted to play.” Joined by Alex Babinski (guitar) and Brian MacDonald (bass), the trio, who came together in 2011, are built upon a dark, ambient sound, mixed with pop and rock. “We just want to play our music and let it take us where it's meant to,” says Gunn. With the release of their self-titled EP the band are excited to be touring as well as releasing some new music very soon. –Aime Szymanski

ROCKS LIKE: City And Colour / Bon Iver / Dashboard Confessional
Evan Pharmakis started Wind In Sails as a solo project in 2011 after moving on from his then-band Vanna. “We had creative differences, so I parted ways to continue writing music with a positive message,” he says. Leaving post-hardcore behind, Pharmakis stripped down to a softer folk sound that would further enable his positive message. “I enjoy writing darkly melodic or haunting type stuff, yet I almost always write positive lyrics,” the singer says. “This music isn't about fame or fortune; it's about helping people and making a difference.” After releasing his new EP, Darker Nights, in October, Pharmakis looks to take WIS in a bigger direction. “I would love to be able to do this full time and support myself. I'll be looking for a good home for Wind In Sails, as well as good management. Hopefully, I'll find those things somewhere down the road.” –Matt Crane
ALT.