Before Megaforce Records co-founder Jon “Jonny Z” Zazula got in the game, the term “heavy metal” usually referred to long-haired radio rock from the ’70s. Once Z quit his day job and invested in Metallica, he did as much as anybody to harvest modern metal.

Working on a shoestring budget, Z and his partners grew the genre from indie labels and tiny clubs to major labels and stadiums. The label head, manager and promoter tells stories from his peerless career in his new book, Heavy Tales, co-written with Harold Claros-Maldonado.

From brutal thrash to colorful toys, Heavy Tales is a love story between Zazula; his business partner and wife, Marsha; music; and art in general. As a promoter, Z brought metal pioneers such as Anvil and Raven to America. He and his wife personally shaped half of thrash metal’s Big Four bands, guiding Anthrax and Metallica to stardom. As a performer, he invented rap metal with the short-lived Lone Rager project.

In short order, the Zazulas once again helped redefine heavy music with controversial Anthrax side project S.O.D., sparking the ’80s hardcore-metal crossover movement. In the ’90s, they pumped up Ministry from a synth-pop sensation to an industrial legend. But metal remains front and center: Over the years, they stayed in the game with emerging bands (Fozzy) and veterans (Testament, whose frontman Chuck Billy wrote the foreword).

Z’s life is fun, but never easy: He struggles with undiagnosed depression. The couple live under constant financial pressure. Never coasting, they branch out in surprising directions, working with the underground sensations such as the String Cheese Incident and Disco Biscuits. Their metal management money bankrolls the Zs’ classical label called— wait for it—Megaforte and then funds a lucrative obsession with collectible toys.

The book is a relentless monologue in Z’s classic Brooklyn voice. Through it all, he spreads the credit around, calling attention to behind-the-scenes heroes such as his wife, manager Debbie Abono and manager/publicist Maria Ferrero. Spoiler: Everybody who’s anybody in extreme music makes an appearance in this important guide.

The recently retired impresario took a call from AP the day after a lengthy oral surgery. Smiling through the pain, Z recapped some of the book’s headbanger highlights.

Why do the book now?

JONNY Z: I retired at the end of May of 2018. I had things going really good with Venom Inc. And Marsha then got ill. And I said, “I don’t want to be distracted from you, Marsha.” So that was it. I didn’t do the book for the money. I did it ’cause A: It’s a love story. I get to tell everybody how much I love Marsha and shout it from the rooftops. B: I get to show people that it’s OK to make mistakes as long as you hit a lot of home runs. And C: Nothing’s perfect, and you can do it with mental problems or illnesses.

How do you stay married through 40 years, especially in your line of work?

It takes a lot of love. It takes a lot of respect. You gotta see people ugly and see them beautiful. It’s never getting tired. It’s always being amazed. Appreciating the person. 40 years. And we’ll go another 40 unless we go.

In the book, you credit a lot of behind-the-scenes people.

The story is about a guy who is an ordinary guy who has nothing, who turns out to be the luckiest person in the world and blessed by the lord—I am a lord person. And between the people who worked for me and helped me and came into my life, I attracted all these geniuses, nonbullshit people. And I had the wonderful Marsha holding me up all the time when I was going down from my depression [and] giving me advice like the mentor she was.

Was the depression tied to stress? Was it there during the good times, too?

Oh, no. I am mentally ill. I have very bad bipolar disorder. In the early days, I didn’t know what it was. I thought I was one crazy, wild mother. And then as I got older, I started to realize that, through psychopharmaceuticals, you could really take the edge off. But even today, I have my moments. I give thanks to all the people who helped me get through it all.

At some point, every music fan has seen a band they like and thought, “They could be huge!” But nobody was ever as right about it as you were. Are you surprised by how big Metallica became?

No, no, no. I saw it. I heard it the second I heard the demo tape. I knew it was gonna be the biggest. But I didn’t envision it lasting this long. I was used to Cream fading away, Led Zeppelin fading away.

Was there a single moment when you knew something new was coming? 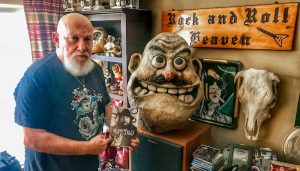 In the book, you say you could tell [Metallica drummer] Lars Ulrich was going to make it. What’s the difference between people who go the distance and those who don’t?

There are people who are visionaries who are full of shit. And there are people who are visionaries who have a genuine plan and process in their mind on how to get to a certain point. Lars Ulrich always saw where he was going. I don’t think he realized he’d be in the biggest band in the world, but he at least had the vision that he was going to be as big as AC/DC. And he shot for it. It wasn’t his goal to just get signed. He wanted to go out there and kill.

What’s your advice for people who want to work with young bands? What’s an ethical balance between keeping a small piece and trying to lock them down for life?

The DIY business is the only way I do things. First thing: Never go into business unless you really love the band, and they really love you, and you have something in writing in case they make it big, and they want to leave you. I believe in handshakes now more than ever.

The first mix of Metallica’s debut album, Kill ’Em All, came back sounding like a nice and clean rock ’n’ roll record. And you had to fight for it to sound right. How do you convince people to do something new and unconventional?

It sounded like Journey. [Lead vocalist/rhythm guitarist] James Hetfield came to me and said, “You gotta talk to [the mixer].” I said, “This is not something I want to put out. You gotta do all the chugga-chuggas and make it heavy, or we don’t even have the band we wanted to record.” I don’t listen to anything anybody has to say. I’m a rebel. It’s my way or the highway. I said, “This isn’t what I paid for.” [Alt-rock-era band] Nudeswirl, I took $96,000 worth [of] tapes and put ’em in the dumpster.

What is The Zazula Listening Test?

When is it the right move to turn down an offer?

Some offers come with a lot of money, but you gotta sell your soul. I believe any contract is good if you have an exit, something in the contract that codicils you leaving, an option that says, “You gotta sell 200,000 records, and I’ll stay the third, if the record company’s doing their job and I’m making money.” What happens when you sell 5,000 records, man?

It’s not a metal show. My favorite young show where they really came of age was Metallica, the Rio Theatre in New York [in 1984]. That was a great, magical night for Metallica. The favorite show was Captain Beefheart And His Magic Band at a small club in New York called Ungano’s. I never had my hair rise from my hands from how insane and brilliant it was. They were never able to duplicate that night.

Your favorite toy line ever?

I loved the Nightmare Before Christmas toys that came out of Jun Planning in Japan. The ones that got me into it were the Hasbro American pieces. I bought everything. If it was Nightmare and it didn’t look like crap, I bought 10.

Is there a band who got away?

I got very heavy into management. I had Al Jourgensen and Ministry coming off Lollapalooza, second on the bill. I had Anthrax really riding high. Testament was happening. And Pantera came to me. I remembered Pantera as a glam band from Texas. I didn’t even pay attention. And Michael Alago [the A&R legend who signed Metallica] came to me with White Zombie.

How do you draw the line between working hard and not having fun?

Jonny Z’s Heavy Tales will be released Oct. 29. The book is available for preorder including signed options here.