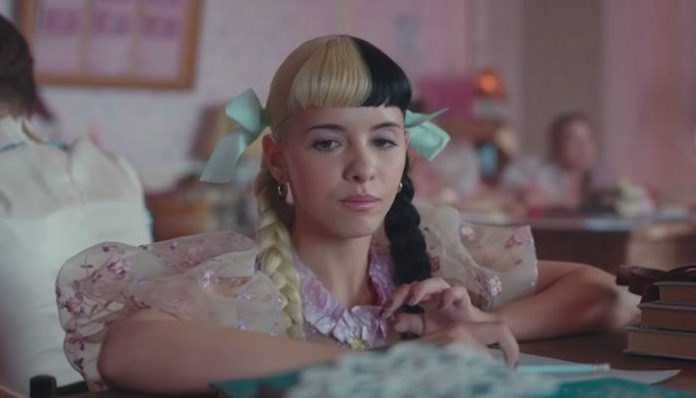 Melanie Martinez has a proven track record of taking fans on deep-dive journeys through her pastel, dark-pop fantasy world, and she doesn’t disappoint with the premiere of her first feature film, K-12. The 96-minute movie accompanies her highly anticipated sophomore album of the same name, which is out today. K-12 marks Martinez’s feature directorial debut and showcases her strength as a true creator, having been involved in all aspects from the costume and production design to the cinematography.

In the eerily enchanting musical, the fictional character Cry Baby, who we first met in Martinez’s 2015 debut full-length, is now of age to be sent off to a disturbing boarding school hidden underneath a grandiose facade. Luckily, Cry Baby is an uncompromising lead. Along with her best friend Angelita (and their superpowers), they take on everything from the school administration to bullies to the other students whose brains are under control by the principal and his staff.

Martinez undoubtedly has a knack for creating elaborate storylines and creative visuals but reveals there was difficulty translating the ideas in her head to make them a reality. “[It’s] such a hard thing for me to do,” she told AP at the K-12 movie premiere in Los Angeles this week. “With the Cry Baby videos, a lot of the time, I had something in my head and could get close, but never that close. I think with the film, it’s the closest I’ve ever gotten to putting something down and actually executing it and finishing it and having it be so close to what I saw in my head.”

While Martinez admits a lot of scenes had to be cut due to budget constraints (and because it would have been a three-hour film otherwise), K-12 still remains visually stunning. Martinez may play a superpower-wielding, confident badass in the movie. But in real life, she certainly faced self-doubt throughout the filming of the movie and the recording process of the album.

“Since it was my first time writing a feature film, I was very doubtful throughout the process and had moments where I was scared…[and] almost like, ‘I don’t know if can do this,’” Martinez says. “There are so many learning curves. I had to learn Final Draft and all these different things to be able to give it…[and] show it to people who then could see it and understand it enough to help me bring it to life.”

The entire process took a month of pre-production in Los Angeles and a 31-day shoot in Budapest, Hungary, a period which Martinez describes as “very stressful but worth it.” As Cry Baby navigates through various stages of grade school from elementary (“Show & Tell”) to awkward middle school cafeteria encounters (“Lunchbox Friends”) to a high school dance (“Recess”), she enlists the help of other magical friends along the way. Eventually, they’re able to gain the strength they need to fight off the school’s belligerent patriarchal conditioning.

Furthermore, Martinez not only confronted societal issues in the movie as an actress, but also in her role as director, which she says was the most difficult part of the process.

“I think the hardest part was honestly probably stepping into the role of a director and having my voice be heard on set in a very masculine environment,” she shares. “It felt like a lot of the times I was getting my toes stepped on…It was a test for me to see, ‘How confident of your vision are you? How much can you really feel like you’re stepping into that role of a director and being able to guide everyone to that vision?’”

Read more: Can you identify the Melanie Martinez video from a single screenshot?

Following the journey of the K-12 students, who are dressed in baby-doll-esque school uniforms (but not at all as innocent as they appear), the film is oftentimes jarring with the juxtaposition of harmless imagery paired with a darker storyline, as the characters never shy away from profanity or back down from tackling social issues such as gender roles (“Drama Club”), eating disorders (“Orange Juice”) and body image (“Strawberry Shortcake”), among many others.

“Ever since I started making music, my main goal with what I was writing was to make sure that I was really conscious of the story that I was telling, and my purpose in life I feel is to make music that can in some way, shape or form help people heal, so I think it’s necessary to talk about uncomfortable topics in art and music,” Martinez said in a cast Q&A after the premiere. “Obviously, it’s uncomfortable, but these are real things on a daily basis that we experience and that we see on the news.”

Not only does Martinez tackle important issues, but she also expertly does so while balancing her love for the macabre with her signature pastel style.

“It’s necessary because it’s just a reflection of life, and life has both ups and downs, both light and dark aspects,” she says. “You can’t have one without the other, and I think in the future, there will be a lot of recurring themes that contrast between light and dark or just duality in general.”

During the Q&A, Martinez also hinted at her upcoming tour, revealing that she’s hoping to recreate all the different vignettes from the movie with every song and its individual story, such as enhancing the experience by recreating the smell of oranges during “Orange Juice.”

When asked about the future of Cry Baby, Martinez also foreshadowed upcoming albums, revealing her next two films paired with albums are planned out already. “I can say [Cry Baby is] definitely going to evolve and grow, just not in a literal way,” she says. “Her being will evolve and transform.”

K-12 the album dropped Sept. 6 via Atlantic. You can check it out here and view the feature film counterpart below. Martinez will also be embarking on the K-12 tour this fall with tickets and dates here.