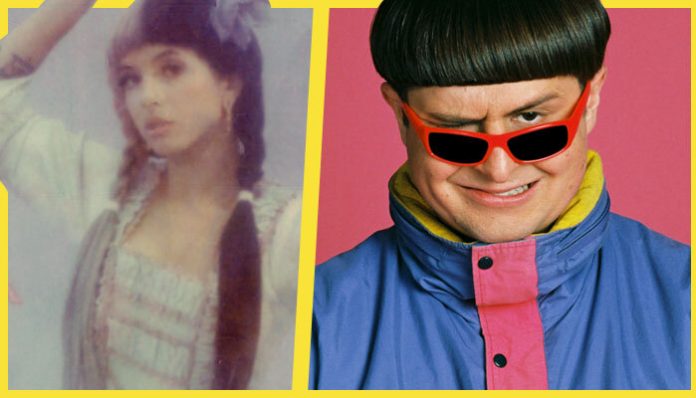 When approached for issue 375, Oliver Tree refused to talk to us unless Melanie Martinez interviewed him personally. It turns out the two are actually fast buds, and their repartee is the kind of thing you can only pull off if you’re chilling with your bestie. Like any good friend, Martinez threw him some softball questions—and like any other frenemy you’ve ever had, Tree fired some ’tude her way.

But who among us doesn’t know about the manic glory that is Oliver Tree? Paving his way into both your heart and hard drives with shouty melodic rap tracks goofy (“Alien Boy”), profane (“Fuck”) and electro-funky (“Do You Feel Me?”), Tree has made a cottage industry out of a helix entwining alternatingly whimsical and forlorn wordplay along with color blindness. (We didn’t mention the hair because, well, you already have an opinion on that…)

Before things came to their quaint conclusion, we did learn how Tree makes his records, where his creative ADD stems from, what kind of movies he likes and his exhausting InfoWars-style of chasing down conspiracy theories. High five to Melanie for making this happen. And thanks to Mr. Tree for being a cultural emissary no one on this planet should ever ignore.

MELANIE MARTINEZ: So we both have created these characters for ourselves, and I always get asked how similar I am to Cry Baby, so I’m curious how you would respond to that question. Where is the line between you and your character?

OLIVER TREE: The difference between you and me is that this isn’t a character. I’m literally stuck like this, and I’m stuck with this stupid haircut.

At Coachella I jumped off a 12-foot lighting rack and ended up splitting my lip pretty bad. There was a lot more blood than I expected, but I’d say it was a pretty punk-rock moment considering it was at a rave.

I’m curious if you have a favorite mode to be in? Writing music, directing videos, performing on tour, etc.

I get bored really easily, so luckily I have the creative freedom to bounce through many different things, so I couldn’t ever really get tired of it. The biggest plus side of that is I don’t really get burned out because I’m constantly rotating through different worlds. With that being said, if I had to pick only one to do for the rest of my life, it would be directing videos.

How would you describe your writing process?

For music, I improvise about 80% of my material. I usually produce the instrumental with the help of another person or two. Once it’s enough of a foundation, I jump in the booth and improvise vocals for about 20 minutes at a time. Then I go back and listen back and cut and paste together all the most magical moments. There’s almost always parts of the lyrics that don’t make sense or aren’t executed perfectly, so I come back in the booth and rerecord parts to make the whole thing cohesive. The other 20% of the time I just write the whole song on a piece of paper first and then go record it 50 times till it sounds perfect.

For writing music videos, the process varies, but it’s always much different than the way I write music. I typically lock myself in a room for a few days and play my favorite movies in the background while I write tons of different versions of ideas and then combine all the best ideas together.

What are some of your favorite movies?

That’s a really hard one! I mainly find myself obsessing over director’s bodies of works rather than one standout piece. My top favorite U.S. directors are pretty basic: Wes Anderson, Quentin Tarantino and the Wachowskis. I also have a deep affinity for a lot of modern European surrealist filmmakers like Jean-Pierre Jeunet, Yorgos Lanthimos, Michel Gondry and also the classic Chilean madman Alejandro Jodorowsky. There are different movies for different moods, so it all depends on what I’m feeling.

How many marshmallows do you think you can fit in your mouth?

Have you lost interest in this interview, or have you just lost your creative edge?

Oh, I’m sorry. When we spoke prior, you said to make sure there were some easy questions, but let me give you a harder one. Favorite drink?

Whole milk, straight out of the gallon.

So you’re not really lactose intolerant?

That was a joke. I’ve made myself very clear on the topic. Yes, I’m lactose intolerant, and yes, I take dairy intake very seriously. The real question is, are you really lactose intolerant? Or do you just pretend to be? I read in a 2014 Teen Vogue article that you claimed to be lactose intolerant. However, in my research of you, I’ve noticed you have a strange obsession with milk. Off the top of my head, I can name a few red flags. For starters, your magazine cover shows yourself soaking in a big bowl of cereal and also has an alternative cover of you on an ice cream cone. You have milk, cheese and ice cream tattoos. Also, I’ve found footage of you pouring milk on yourself in a string of concerts throughout 2015. In 2016, you ate cereal and milk in your “Alphabet Boy” music video, and in K-12, during the opening credits, cereal spelled your name out before you ate it with a big spoonful of milk. Also, let’s not forget that you even went as far as selling perfume shaped as a bottle of milk. Don’t ignore the facts, people!

OK, you’re a shitty stalker. I never once said I was lactose intolerant because I’m not, fool. Let’s wrap this interview up. One last question, and I have to say it’s quite important. Who’s your celebrity crush?

I didn’t want to say this, but she’s literally the most beautiful woman in the world, and she goes by the name Melanie Martinez. Please marry me one day and have my children!