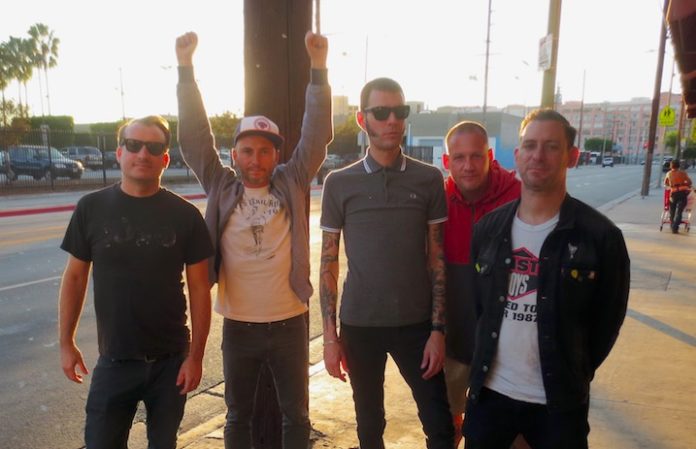 World Be Free's story began in the fall of 2014, when Scott Vogel (Terror, Buried Alive), Joe Garlipp (Envy), Andrew Kline (Strife), and Sammy Siegler (Judge, CIV, Rival Schools) met monthly to write classic-influenced, melodic and positive hardcore. All of this developed without a label, budget or any mention to the outside world. When Siegler scored some recording time at Hurley, they flew in Arthur Smilios (Gorilla Biscuits, CIV) to cover on bass and hustled into the studio. Vogel and Terror bandmate Nick Jett then tracked vocals at Jett's studio, passing the ball to Walter Schreifels (Rival Schools, Quicksand, Gorilla Biscuits) for one final guest spot. With their album finished and its release fast approaching (The Anti-Circle arrives Feb. 5, 2016 via Revelation), west and east coast release dates with Give and Judge are soon to follow.

“It's really cool to see that this record is getting very close to its release. It's been a lot of work to get this done but the end result is something we are all very excited about. It's a whole new direction for me which is super refreshing and fun,” says frontman Scott Vogel, also of Terror. “We didn't take things too serious and didn't need anything slick, just a cool visual to go along with one of my favorite songs on the record. Burying your past missteps and letting go of things that are bringing you down will lead to better days and a new found sense of direction—that sums up the words to this track.”

Guitarist Andrew Kline, also of Strife, echoes Vogel's excitement: “We started this band with no expectations, and only out of our unadulterated love of classic hardcore. We kept the band under wraps, writing and rehearsing songs between tours. We watched World Be Free grow from just an idea to a full-fledged band, and I couldn't be more proud. Hardcore being played with some of my closest friends that happen to be members of some of my all time favorite bands. You can't ask for anything better than that.”

AltPress is premiering the music video for “Shake The Ghost,” whose comic relief was all Siegler's doing. “We showed up to this video shoot with pretty different ideas of what we were doing. One thing I knew for sure was that I was packing a lion costume and that was going to wiggle it’s way in somehow. I’ve been a lion three years straight for Halloween,” explains Siegler. “Last year, I had the flu and was walking around coughing in it, but I was determined to trick or treat. I felt bad giving this to Larry Ransom (our talented actor) since it was contaminated with influenza, but fuck it, when it comes to World Be Free, nothing stands in the way. We made the video and the lion was the star. We played that evening in the warehouse across from the Greyhound station in downtown LA, there was a female basehead out front fighting patrons and the rest is history.”

Pre-orders are live on iTunes and Apple Music, as well as RevHQ, and include instant downloads of “World Be Free” and “Breakout Or Busted.”