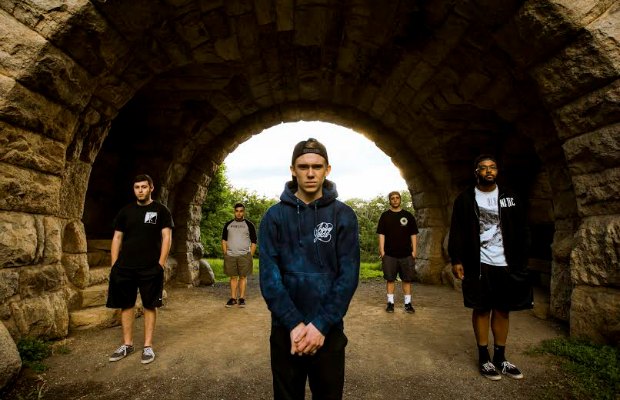 Meridian are set to release their Victory Records debut The Awful Truth September 2, and are giving you a treat for the long weekend with an exclusive 3-day preview of the album and exclusive track by track commentary.

Be sure to listen and share now; as, this stream will no longer be available after 9 p.m. on Monday, September 1. If you like what you hear, pre-orders are available now via Victory Merch.

The Awful Truth
Track-by-Track by MERIDIAN

“Gloom”
The introduction to The Awful Truth is basically written from a frantic/scattered state of mind. This song helps set the overall tone of the record. We feel it gives a taste of the dynamic of the record to listeners right away.

“Everything That Kept Me Moving”
This song is a reaction to how we view the world and how it affects us. We find it strange that so many people try to live their lives by what they're told rather than going out and discovering things on their own.

“Slip Away”
This is about self-evaluation and realizing things about yourself that you want to change, and positively addressing those changes. The goal of the song is to portray a positive mentally in a negative world/situation. An epiphany that even though the world is falling apart, I don't have to.

“Waves”
This song is a reflection on the relationships with friends we've had over the past few years and the bitter feeling of burning bridges with people you once cared for.

“Slither”
The angriest song we've ever written. It's about that one person everyone knows who's hell-bent on sucking the life out of absolutely everything.

“Clarity”
“Clarity” pays homage to the opening lines of our first record, Reformation. It's essentially just us channeling the thoughts and questions we ask ourselves every day out of frustration and turning them into song. The fear of the unknown is an unsettling fear. We feel the need to revisit the questions we have and will continue to ask them until they are answered.

“Piece of Mind”
This song is about not letting yourself get taken advantage of. We hope it will inspire people who don't have the courage to speak up for themselves to make a change.

“Set Free”
“Set Free” has taken the role of the anthem on The Awful Truth. Since it was written, we were really looking forward to recording and releasing the song. It's our attempt to create chaos and get people to start thinking freely, paying more attention to aesthetics and to express themselves. Originality is dead, let's bring it back to life.

“Wait For Me”
As of recently, our hometown has been afflicted with a serious drug problem. In the past year alone we've lost a couple friends to substance abuse problems and keep finding out that more and more of the kids we grew up with are falling victim to them. We hope this song can be our way of taking a stance, to let people know that there are other answers out there.

“Making My Way”
“Making My Way” is really all about past bandmates and moving on from the things that block you from reaching your goals.

“Malady”
This song embodies the youthful mentality of challenging the status quo. It's not okay to let yourself be manipulated by the media and other biased platforms of information who are passing off their opinions and views as factual information.

“Borrowed Time”
“Borrowed Time” means the world to us. During the time of writing the record, David, our vocalist, was hospitalized for a suicide attempt. This song is about living through that experience and realizing that there is a second chance at life.