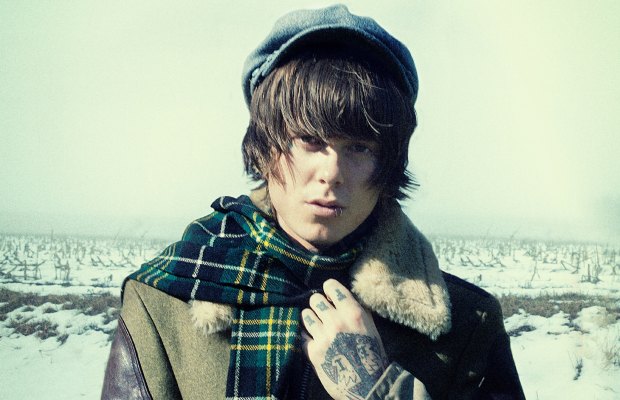 The year might be winding down, but it’s actually marking an onslaught of activity from NEVER SHOUT NEVER. On November 25, the band will issue The Xmas EP, a four-song selection of holiday-themed tunes featuring standards and a new track “Meet Me Under The Misteltoe” which was co-written and performed with Dia Frampton. Since recording the songs, NSN CEO Christofer Drew has moved his whole creative operation to Malibu, California, where he will be working and refining several projects including the next NSN album, the new installment from his hardcore-tinged project Eat Me Raw (formerly known as Eat Me While I’m Hot) and an album that is being designated as a “Christofer Drew solo album.”

Confused? Don’t worry: Jason Pettigrew asked the singer all about his plans, while Drew was driving through New Mexico, hauling parts of his recording console to his new SoCal base of operations.

So then: Why a Christmas record?
We were just thinking of something that was really low pressure, so we could get some music out and I could experiment a little more. I was trying to think of something I could do, and then Danny [Rukasin, manager] and I were like, “A Christmas record would be cool.” I had a couple Christmas songs that I really liked. We put out one song in 2009 [“30 Days”], and the fans really liked that, as well. I think they really like the Christmas vibe.

You cover John Lennon’s “Happy Xmas (War Is Over)” and “Winter Wonderland.” Do those songs have personal resonance with you, as far as Christmas memories go?
[I chose] “War Is Over” because when I was 16, I really got into the Beatles and that was the song I learned on guitar. It was a song I was interested in learning, so it was fun to bring it back and jam out. I just think “Winter Wonderland” is awesome. I think the lyrics are great. It’s so lighthearted and has a really classic feel to it. I totally sang it as a kid; my dad used to bust out the acoustic guitar on holidays, and we’d all sings songs together. It was pretty fun.

Are you a Christmas kind of dude? Is that your favorite time of year?
I like it because I have a lot of good memories, and it’s nostalgic in a sense of having really close times with family–very pure times.

There’s a propensity for other bands to make Christmas records and play it for laughs, make them all jokey. But your EP is really sincere and pleasant. If your fans could care less about the holiday, the vibe of the record sounds like your earlier work.
It was the first thing I’d [recorded] at my place, by myself. That was exciting for me. I wanted to show off a couple skills playing some more intricate stuff, but I just wanted to keep it super-simple. That was kind of the game plan going into it: keeping it minimal but still adding what I wanted with that mindset. It was really a chill process. It was just my buddy Ben [Bauder, engineer] and I in the studio. We busted it out in two weeks.

You co-wrote “Meet Me Under The Mistletoe” with Dia Frampton. I was told you two wrote it in a park and recorded it the next day.
We were right outside of Hollywood in Griffith Park. We wrote it in two hours during the afternoon the day before, and recorded it the next morning. We recorded [a demo version] over my phone, and we just winged it. I had a decent chord progression, and we came up with some cool lyrics pretty quick because it was just for fun. There was no pressure on us to make anything other than a cute Christmas song—which is pretty easy to write. I thought it turned out pretty nice. I think it’s the first duet I’ve done with a girl, recorded, up to this point. >>>