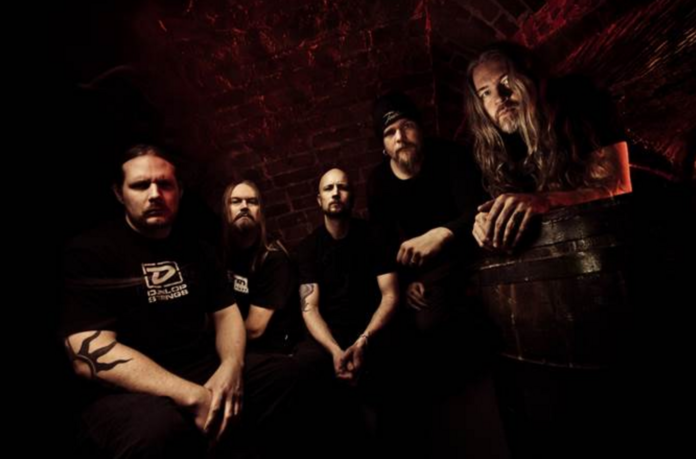 Few bands can legitimately claim to have spearheaded an entire movement in music, let alone a genre all its own. Meshuggah can.

If you enjoy bands such as Periphery or Tesseract, Animals As Leaders or Monuments, you have Meshuggah to thank. It was the late ‘80s, in the college town of Umeå, Sweden that four 20-something musicians would form Meshuggah and begin composing the songs that would land on their 1991 debut album, Contradictions Collapse. Though a far cry from what the band would evolve into, the mutant-Metallica riffs coupled with Jens Kidman’s Hetfield-esque bark was still way ahead of its time, even by thrash metal standards.

Fast-forward four years: Guitarist Mårten Hagström is added to the fold, providing a solid rhythmic foundation for founding guitarist Fredrik Thordendal’s jazzy and dissonant lead playing. Destroy Erase Improve seems a natural evolution for the band at first listen, but subsequent listens reveal something more. Stuttering rhythms give way to mind-melting musicianship unheard of at the time. Opening cut “Future Breed Machine” begins like a broken jackhammer to the skull, squealing and churning around a rhythmic frenzy before spiraling into a pit-inducing breakdown. The song becomes a classic in metal circles and completely changes the way like-minded musicians such as Ben Weinman of the Dillinger Escape Plan perceive the boundaries of extreme music.

It took the suffocating heaviness of 1998’s Chaosphere for Meshuggah to fully realize what kind of band they wanted to be. It’s in tracks such as “New Millennium Cyanide Christ” and “The Mouth Licking What You’ve Bled” where you hear the sound Meshuggah would eventually become known for — and consequently spawn an entire genre. That wonderfully down-tuned, groove-oozing and jittery style of playing that sounds a bit like a robot having a seizure.

The band sought to take their down-tuned sound even lower, so Thordendal and Hagström had custom eight-string guitars made to record their parts for 2001’s Nothing. The result was something truly not heard before; the textured grooves and twisted rhythms would become a staple of Meshuggah’s inimitable style, one many bands would attempt to imitate but come nowhere close. This marked the popularization of eight-stringed guitars being used in metal — and could be considered the birth of the djent movement.

The band’s subsequent albums were as groundbreaking and innovative as those that came before them, and saw Meshuggah continuing to refine, explore and even eclipse what they were capable of. Building upon the concept of their 21-minute long, single-track I EP, 2005’s Catch Thirtythree played like one continuous, 47-minute musical suite of unparalleled heaviness. Still, they managed to get even heavier on obZen, a record that landed Meshuggah their first world tour. Track such as “Dancers To A Discordant System,” “Combustion,” and the impossibly-performed “Bleed” have become mainstays of Meshuggah’s mesmerizing live show.  With 2012’s Koloss, Meshuggah flirted more with sludgier guitar tones and down-tempo dirges that took their polyrhythmic supremacy even further and built upon their already-signature style. While “Do Not Look Down” and “Marrow” are most safely classified as falling under the djent umbrella Meshuggah themselves pioneered, Koloss’ strength lies in the tracks that show a different side of the Swedes, such as the more subdued “Swarm” and the monolithic “Demiurge.”

Last year’s masterpiece The Violent Sleep Of Reason was a not-so-subtle reminder of why Meshuggah will always be the masters of the djent movement. Recorded live at Antfarm Studios in Denmark with producer Tue Madsen, The Violent Sleep Of Reason successfully fused the mechanization of Meshuggah’s compositions with a decidedly human touch and is a testament to not only Meshuggah’s adept songwriting prowess, but also their inhuman aptitude as musicians as well. “Clockworks” is perhaps the best example of this. The song’s jittery riffs drill their way into the listener’s skull, but what’s more jarring is the shocking musicianship of the track, especially Tomas Haake’s marathon-like performance behind the drum kit. Few musicians perform at the level of Meshuggah, and The Violent Sleep Of Reason is proof that nearly 30 years later, they’re still in a league all their own.

All this is to say: No djent band will ever top Meshuggah. While it’s likely flattering for Meshuggah that so many bands have taken what they started and ran with it, it still doesn’t hold a candle to what Meshuggah have achieved. Their music has always been characterized by extremity; this is something they’ve never compromised, even to this day. They stand far above the trends in metal, instead paving their own twisted path and innovating from record to record. So please, djent bands, it’s okay to try and copy Meshuggah; but please, stop trying to be Meshuggah. You’ll never top the masters.