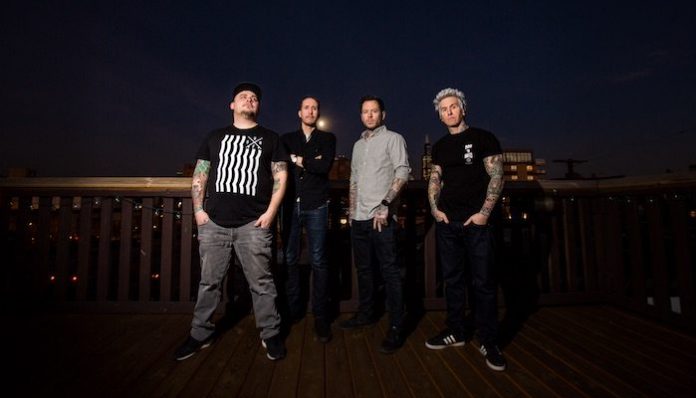 Long-running punk band Mest are promoting their new album, Masquerade, in grand form: by premiering the video for the title track with AltPress today. The clip’s production values dovetail nicely with the passionate punk stance that guitarist/frontman/founder Tony Lovato is known for.

“I had the video concept in my head for a while,” he tells AltPress. “I reached out to my friend Brenda Dalzell. She’s a professionally trained dancer and choreographer, and told her my idea. She also happens to own a dress rental company. She was super-excited to do something essentially different from her normal line of work to help me out with the video. When she showed me the dresses and dances she had put together, I couldn’t have been happier. She did a great job as did all the dancers.”

While Lovato welcomes listeners’ personal interpretations of his work, he did have a vision for “Masquerade.” Since writing it, he says it has accrued multiple meanings for him, one of which is balancing being a father to his 5-year-old son and a touring musician.

“But as I wrote more, it took this concept of modern society and how we live in a world where people can give you any perception of their life,” he explains. “A bunch of photos on someone’s Instagram account may show them smiling all the time and having fun. But in real life, they could be going through a very dark time.

“Also, the idea of wanting people to perceive us a certain way has not changed in centuries,” he continues. “When people would go out to these masquerade parties in the 1800s, they would wear masks and hide their true identity only to reveal who they really were at midnight. This was the only time peasants would socialize with the rich. Living in L.A., I’ve seen the status quo interaction between people so many times. So the concept was to show the same two people from two different eras getting ready, going out, having a good time, meeting for the first time, going home together and waking up next to each other with little memory of the night before and continuing on with their separate lives.”

Read more: My Chemical Romance are why you lost sleep on “A Summoning” nods

Since the release of Broken Down 2 in 2017, Lovato has been navigating Mest through a steady stream of touring and a fierce DIY ethic. Masquerade was originally intended to be released on Cyber Tracks, the label run by NOFX guitarist El Hefe. However, Lovato changed his mind and bought the album back to self-release.

He credits the crowdfunding legion of Mest fans (who ponied up $54,000) for getting Masquerade out into the world and then signing a distribution deal with the Orchard. (“This is our first record being released in the digital era,” he beams.) After stints on labels great and small, Lovato has chosen to keep his band’s business as close as possible.

“To me, it made sense to do this all on my own,” he says. “I’ve been in this band for 25 years and know enough about the music business. I can’t say it’s not extremely difficult doing it all, ’cause it is. Manager, booking agent… I run all the merch out of my house and essentially now run the record label side of things.”

You can purchase the new album and other sweet Mest swag here.

On April 18, Mest will be celebrating the 20th anniversary of their debut album, Wasting Time, with a show at the Garden Amphitheatre in Garden Grove, California. In addition to Mest performing the album in its entirety, there will be acoustic sets from Kris Roe (The Ataris) and John E. Trash (Home Grown), Twilight Creeps (actor Shane West’s band) and Taken Days. Lovato is contemplating taking the anniversary tour across America.

Check out “Masquerade” and ponder wanting to hold a punk-rock masquerade of your very own design, public or intensely personal.