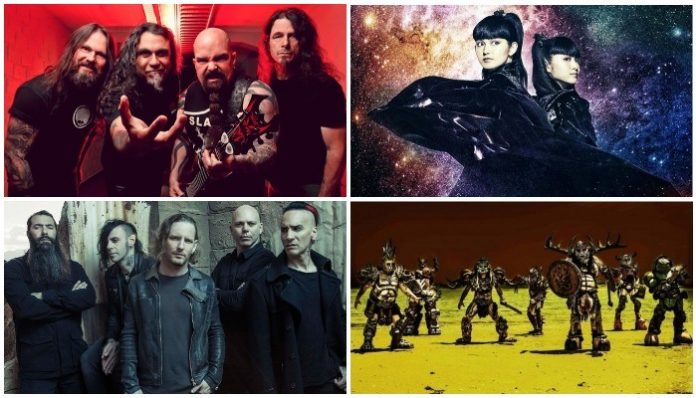 Metal bands inarguably have the best aesthetic of any genre, with many musicians looking like characters in real life, so it’s not surprising many have their own comics. From the iconic space alien costumes of the GWAR musicians to Rob Zombie or Alice Cooper’s horror vibes, metal musicians achieve the perfect aesthetic for artists to bring to life in comic books.

Take a look below for 10 bands with their own comic books.

GWAR : ORGASMAGEDDON this is my official cover variant for the new GWAR comic coming out June 7 !! I have been a long time fan of the intergalactic scourge, and the first time I ever saw GWAR perform, it was at Harpos in Detroit, and Dying Fetus opened up for them. On that night, they swore, that in twenty years from then, GWAR would still be playing, and would never stop. Here we are, almost fifteen years later from that point, and that one dirtbag kid in the crowd heard that, and with every ounce of my being I am honored to represent the band with my art. I have made so many life long friends through heavy metal, and as I go deep into my 30s, that same 18 year old kid standing in line waiting for GWAR to play still stands now, and all of that excitement and fun is present to this day. Before the show we stopped at a local KFC that had 6 inch thick bullet proof glass over the cash register, and someone spray painted over the entire goddamn bathroom wall 'GWAR KILLS ALL' – and in my own work, I shall hold that same war banner high, and let that war cry ring out across time eternal. mighty hails onto @gadgetwk who is doing the interior pages, and mighty hails unto @mattminerxvx for doing the writing. Make sure you grab a copy come summer time, and also look for a comic short Ill be doing for them in later issues. a dream come true for an old dog like me. HAIL !!

GWAR have developed a ridiculously thorough storyline in their three-decade long history about the origins of the crack-smoking murderous alien musicians. They’ve created movies to build their story, written plots for various tours to follow and eventually landed a comic book. The storyline for the GWAR comics builds on their lore and features some art and words from members of the band.

The official Iron Maiden Graphic Novel is out next week! Collecting issues 1-5 of the Legacy Of The Beast comic book series in one handy paperback: Pre-order now – IronMaiden.com/comic #LegacyOfTheBeast #GraphicNovel #Comic

Classic heavy-metal heroes Iron Maiden have adorned their album covers and merch with their iconic mascot Eddie for ages, and his look is as legendary as any in metal. The character finally made his way on to the pages of a graphic novel with the release of the Legacy Of The Beast series, which follows Eddie pairing with a mysterious alchemist to journey through London’s East End in search of a killer.

Stone Sour took a creative approach to adding comics to their repertoire, generating a story to coincide with their double album House Of Gold & Bones. The limited-edition four-part mini-series created by Corey Taylor shows the actual characters and plotline the album follows while delving into concepts only hinted at on the albums.

Slayer are nearing the end of their career, and in their three-pus decades as a band, they’ve cemented their status as one of the greatest metal acts of all time. Along with that placement in history, they’ve created merch for pretty much every situation you could think of, including comics when they dropped their 2017 story, Repentless. The story initially developed in their music video for “Repentless” shows what they always have: the dark side of how humans treat each other in society.

Seeing this at our Luzerne show made my night!!! A fan had the cover image from our comic tattooed on his arm. #butcherbabiescomic #butcherbabies

The leading women of Butcher Babies have skills to flex beyond their vocal abilities as they’re both talented artists. Carla Harvey and Heidi Shepherd both contributed to their comic book with words and illustrations alongside visual artist Anthony Winn, which coincided with the release of their first EP. The comic has become iconic enough among fans that some have even gotten the drawings tattooed on themselves.

Claudio confirms 'The Amory Wars: Good Apollo' will hit comic shops in 2017. Artwork by #RagsMorales @ragsnhashtags colors by Emilio Lopez. Pick up a preview book "Ashcan" exclusively at New York Comic Con booth #2329 or on the remaining dates of the current tour only. #newyorkcomiccon #Nycc Signing today at 5pm!

Coheed And Cambria fans shouldn’t be shocked about this, but the band’s entire discography is based on a comic series titled The Amory Wars written by frontman Claudio Sanchez. Each album tells the story of a chapter in the series, which follows a sci-fi story about two character’s struggles with a Supreme Tri-Mage set in the midst of a collection of 78 planets connected through beams of energy.

Shock-rock king Alice Cooper received the ultimate comic world honor of having his name and face published with Marvel. He originally appeared in a 1979 special issue and has since had numerous comics made in collaboration with him, including a Simpsons special-edition comic and a full mini-series.

Rob Zombie has had a pretty fantastic career in terms of diversity, with him getting to try his hand at all of his major interests. Not only has he built a massive career as a musician and horror movie director, but he’s created numerous comics, including ones that develop the lore of some of his incredible characters from House Of 1000 Corpses and other films.

A post shared by The Legend of BABYMETAL (@babymetalgraphicnovel_official) on Sep 12, 2019 at 6:41pm PDT

If you’re keen on Japanese kawaii-metal band BABYMETAL, you probably know they have a pretty wild story created about the three members. The lore surrounding the teen metal stars has spawned countless pieces of fan art and comics, but now they have their own official graphic novel exploring the entire myth the band are based on.

If you ask someone what some of the most shocking and gory album covers are in metal, the majority of Cannibal Corpse’s discography should come to mind. Their work with artist Vince Locke has become legendary after getting banned from performing in multiple countries, which eventually led to a full comic for their record Evisceration Plague. Locke also created a fantastic zombie comic series called Deadworld, which would be right up any death-metal fan’s alley if the Cannibal Corpse comic isn’t enough.