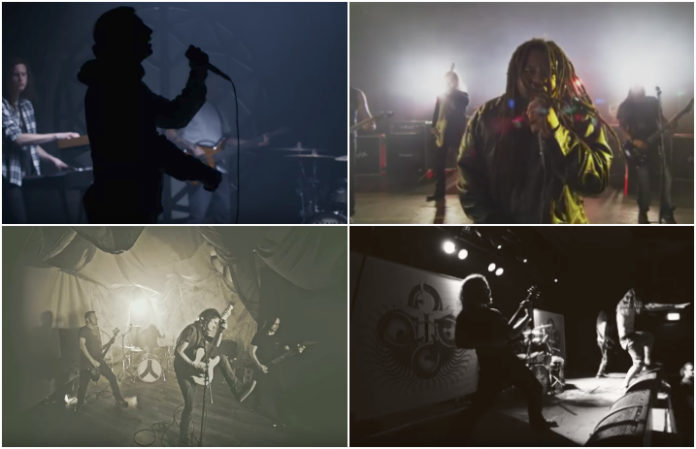 Any metalhead knows that the camaraderie in metal is second to none. Any time you go to show, you feel like you’re a part of one big family, even though you’ve never met anyone there. However, for these bands, the brotherhood of metal goes far beyond just camaraderie: It’s in their blood. Here are 10 bands that have literal metal brothers in their ranks. A family that slays together, stays together, right?

Perhaps the most famous brother duo in all of metal history, Dimebag Darrell and Vinnie Paul of Pantera were a lethal combo. Dime completely reinvented the way metal guitar could be played, and with his brother manning the cannons behind him, it’s no wonder Pantera, and later Damageplan, would become considered legends in metal. Dime was taken from us far too soon when he was shot at a Damageplan concert in Columbus, Ohio, in 2004, but his legacy will live on forever.

One of metal’s most notable juggernauts, Lamb Of God owe much of their gritty, groove-driven style to the brothers Adler. Chris Adler has garnered a reputation as one of metal’s most respected and sought-after drummers, having performed with Megadeth, Testament and even Protest The Hero, while his brother Willie is one of two riff masters in Lamb Of God. The two complement each other like fire and brimstone and are the prime reason for Lamb Of God’s general badass-ery.

Gojira have quickly become one of metal’s most respected and influential bands, and all of their earth-shaking music is the product of brothers Joe and Mario Duplantier’s incredible songwriting prowess. Joe’s riffs crash upon the ears like a leviathan slamming down on the surface of the ocean and are complemented perfectly by Mario’s bulldozing swing behind the kit. Gojira have become more accessible over the years, with their most recent effort Magma marking their most successful record to date; but they haven’t sacrificed their crushing heaviness for any sort of sellout status. Quite the contrary, the brothers Duplantier are proving that extreme metal can appeal to the masses, too.

Hailing from the tropical nation of Brazil, Max and Igor Cavalera couldn’t have predicted the unstoppable force they would become when they started Sepultura back in the ‘80s. The world had never before heard metal that was so primitive and so savage. Their Brazilian heritage informed the way they approached metal, a quality that came to a bloody head on the band 1996 record Roots, which marked the final Sepultura album with both brothers. However, the two can still be heard bashing skulls in together in Cavalera Conspiracy, a project that evokes those early days when the world was theirs for the taking.

The only guitarist duo on this list, Doc and Dallas Coyle of God Forbid were truly some of metal’s most adept axe-slingers, displaying a mastery and interplay on their instruments reminiscent of names like Hetfield and Hammett or King and Hanneman. The band unfortunately split in 2013, and only Doc played on their final record, Equilibrium; but one listen to the records with the brothers Coyle, and it’s baffling as to why this band didn’t gain more notoriety. For my money, God Forbid’s magnum opus was Earthsblood, a modern-day metal classic that shows Doc and Dallas’ fretboard domination at its very best. We can only hope that God Forbid—and the brothers Coyle—someday grace the stage with their presence once again.