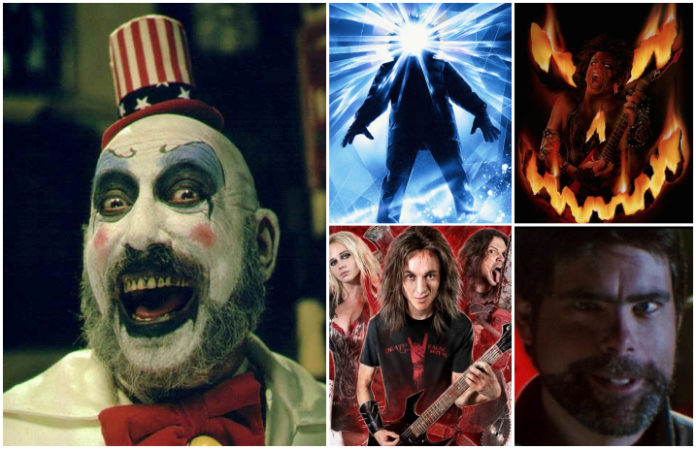 Horror movies and heavy metal go hand-in-hand, so sit back this Halloween and enjoy some of the scariest, most rockin’ films out there. Here’s our selection of 10 metal-related horror flicks, presented in no particular order.

With appearances from Ozzy Osbourne (portraying an anti-metal televangelist) and KISS’ Gene Simmons (as a radio DJ), this mid-’80s cult film still holds tongue-in-cheek cachet for metal-loving movie buffs. After dying in a mysterious fire, a local heavy metal musician is brought back to life when his No. 1 fan plays his record… backwards. The two then plot to destroy various high school bullies at their shared alma mater. You gotta watch it!

Read more: 13 horror movie easter eggs you might have missed

This under-the-radar horror movie from New Zealand follows a couple of metalheads who unite to form the titular band, Deathgasm, and unwittingly conjure a demon with their heavy-ass riffs. How’s that for metal? Half comedy and half horror, the film was apparently a bit too metal for Wal-Mart: The retailer refused to carry it without a title change (to Heavy Metal Apocalypse).

Rob Zombie’s directorial debut is—even with little in the way of metal music on its soundtrack—one of the most metal horror movies there is. A killer clown? A Texas Chainsaw-style deathtrap of a house? Dwight from The Office? That blood-curdling final scene with Dr. Satan? 15 years later, this flick stands the test of time as a spine-tingling masterpiece. Bury us in a nameless grave.

With all of the hype surrounding this month’s release of It, it’s easy to forget author Stephen King once actually directed his own feature film full of sci-fi horror. Maximum Overdrive’s campy tale of man-against-machine dread is backed by a buttload of ’80s hard rock, namely multiple songs by King’s supposed favorite band, Australian rockers AC/DC.

The motion picture that gave Black Sabbath their name must be included on any metal horror movies list! Mario Bava’s hair-raising anthology film from 1963 seemingly altered the course taken by Ozzy Osbourne and Geezer Butler’s band, then called Earth. When Butler noticed the long line to see the flick forming outside of the group’s rehearsal room, Black Sabbath was born! This film practically originated the “metalheads loving horror movies” maxim.

Although this movie is about a decidedly “punk-rock” band, it don’t get more metal than fighting a room full of fucking Nazis! This all-out horror-thriller from Murder Party director Jeremy Saulnier will have you on the edge of your seat the entire time; and once the movie’s over, you’ll be ready to scream “Nazi punks, fuck off!” at the top of your lungs, just like Jello Biafra back in the day.

Honestly, this list could could nearly be split into two categories: Hollywood productions (mostly from the ’80s) and independent films. Heavy Metal Horror holds it down for the contemporary indies by putting a fresh spin on the horror-movie-with-heavy-music tale. Think of it along the lines of It Follows or Black Water for the headbanging set.

It’s been said that the claustrophobic atmosphere of John Carpenter’s The Thing reminds some metal groups of their weeks spent touring, locked away in a van with only other smelly bandmates as company. Regardless, The Thing is a sci-fi horror classic that every movie lover (not just horror-philes) should see. Kurt Russell’s finest performance. (Really?—Escape From New York-loving ed.)

Rob Zombie’s House Of 1000 Corpses epilogue ups the ante in the ominous dread department. He may have fallen off with his subsequent Halloween remakes and, um, The Lords Of Salem, but Rejects is simply top-notch terror. Not a nail-biting slasher but a harrowing road movie, it will haunt your dreams for months to come. “I am the devil,” says killer-on-the-run character and Corpses holdover Otis B. Driftwood, “and I am here to do the devil’s work.”