“Metalcore is not an interesting genre at this point,” remarks August Burns Red guitarist JB Brubaker. “It's very repetitive and predictable; I want more than breakdowns and pop choruses these days.”

Comments like that are not surprising from Brubaker, the principal songwriter in one of the scene's most well-known and loved heavy bands. He and his bandmates—drummer Matthew Greiner, guitarist Brent Rambler, vocalist Jacob Luhrs and bassist Dustin Davidson—have made similar comments on many occasions and the group's recent career arc—through 2011's expansive Leveler and 2012's festive Sleddin’ Hill—has shown a band intentionally disinterested in the current trappings of aggressive music. So far, it’s par for the course.

“I've just been out to pick up some bongos, congas, rototoms, bells and other stuff,” he says when AP catches up with him. “There are a whole bunch of shakers, tambourines and whistles already at the studio and this afternoon we're tracking a Mexican fiesta drum section over one of our new songs. It's unlike anything we've ever done before.”

August Burns Red are currently finishing their sixth studio album and they, are clearly in the business of seizing the moment. “Obviously I love this music or I wouldn't be playing it, but I'm not 18 anymore and we've got to progress,” Brubaker continues. “And while we're not trying to reinvent our sound with the new record, we're definitely trying to broaden the spectrum of what is possible in this music. I feel like we have to.”

Five weeks into a six-week session at Atrium Audio in the band's home of Lancaster, Pennsylvania, Brubaker can see the light at the end of the tunnel and hear the sound that will become familiar to all once the record arrives this summer while the band are playing Warped Tour. “I'm always nervous until I have a final product to listen to, but I love what we have so far. I'm optimistic,” he says, laughing. “I don't want to tell people there is a world-music influence on this album, but there are certainly more 'Internal Cannon'-esque interludes across the album. I think a good word for it would be diversity in general with these songs; we've been more ambitious with what we've put in the music this time ’round.”

After the fiesta session, cello, violin, piano and trumpet will all be added to the 11 songs that will make up the as-yet-untitled effort. “We've not got a title yet,” Brubaker admits, laughing. “I think the worst one we've had so far has been House Of Vagabonds, but I can say that it definitely won't be called that. I should also say that the album title was not suggested by anyone in the band.”

Pausing briefly he continues the thought. “With album titles it's hard to pick one that your audience loves completely. There are a lot of ridiculous ones out there in the same way that there are lots of ridiculous band names, and I'll be the first to admit that our band name falls into that category, in my opinion. What the heck even is August Burns Red? I don't know. Names are names, that's the thing I harp on the least. If the music is good then even if the album title sucks and the artwork is terrible then people are going to overlook all the rest. If the songs aren't decent, then none of the rest matters. I'm confident we've got the important things right on this one.” ALT 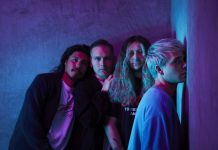