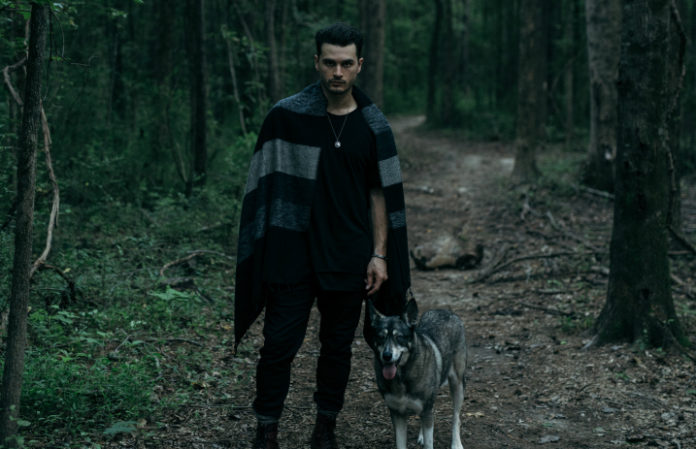 You might recognize the face: Michael Malarkey is well known for playing the brooding vampire Enzo on The Vampire Diaries. But for Malarkey, writing has always been one of his favorite outlets, and that’s made evident through his debut LP, Mongrels, which we're exclusively debuting before it's official release tomorrow, Sept. 8. And although it's his first full-length, Mongrels is far from the start of Malarkey’s music career.

“I don’t want people to think that I’m just an actor who records shit albums on the side. This is very much my life and my heart in this album,” Malarkey explains. “It’s scary too because you’re revealing a lot about yourself. If people who are poetically-minded are paying attention, they’re going to be reading a bit of an autobiography.”

His first emotional connection to music stemmed from his love of the Beatles as a child. From punk band frontman to poetic lyricist, Malarkey had crafted five albums worth of songs before releasing his debut EP, Feed The Flames, back in 2014. With a sophomore EP, Knots, released in 2015, Malarkey was prepared to craft his formal full-length debut, telling the story of restlessness—a theme ever so apparent for Malarkey. Whittling through 50 demos and creating a tracklisting that just felt right, Mongrels was formed.

“Thematically, what I settled on was this idea of the mongrel—the restlessness. This sense of longing and hope, but sadness. This sense of looking out and feeling that emptiness and need to move. I think these have been running themes in my life, and that's what I wanted to portray with Mongrels,” Malarkey explains. “But, in a way, Mongrels is a dark place. I had a bit of a darkness come over me when I was writing a lot of these songs. It’s about pressing through that. The photo on the cover is in the woods, and the video for ‘Mongrels,’ you see me going into those woods. Basically it’s this idea of pressing on, going through and coming out the other side.”

For Malarkey, this entire process has been one of self-discovery. A series of “happy accidents.” And, most importantly, a full-length release he's excited to share with the world.

“It [songwriting] was a form of poetic journalism for me,” Malarkey explains. “Mongrels is all over the place. It’s a dark little terrain. People say, ‘Why do you make such sad music? You’re such an upbeat, positive dude,’ and I’m like, ‘Well, it’s because I do that that I’m able to be like that.’”

Stream Mongrels below, and read a Q&A with Malarkey on his history in the scene, transition from screaming to indie-laden Americana and his love for live shows below.

You might be most known as an actor, but you have quite a history with music. What are some of your earliest memories involving music—and what made you want to become a musician?
I found an old Beatles cassette tape; I think it was called something like Beatles love songs. The first song was “Michelle,” and I actually had a crush on this girl named Michelle at the time. I remember listening to that whole tape and being all young and dumb, and that was my first relationship with music—from an emotional perspective. How it made me feel and going through the journey of those songs. That lead me to listen to music that way ever since.

When I went to high school, my first real obsession with wanting to make music came from the punk/ska/hardcore scene. I was skateboarding, doing graffiti, and going to shows and crowd surfing. It was the unity of the scene—it was aggressive with love and support for everybody, but it was mostly just having a great time. At that point I really had the idea that I wanted to sing in a band.

Now, of course, your music doesn’t involve screaming anymore. So where did you notice the transition into the more blues-y folk that you produce now?
It was just a progressive thing, for a few different reasons. I remember once, sitting at my buddy’s house and looking through his dad’s old records, and he had a lot of Neil Young, James Taylor, that kind of stuff. One of the records I picked was Tom Waits’ Rain Dogs. I remember putting that on and being completely floored by the sound. It was such a clash of different influences, but it all held together with his poetry and crazy theatrical delivery. And I remember responding to that idea of theatricality, that you don’t actually only have to sing from a place of truth. You can tell stories. Writing is one of my favorite things to do. I’ve written ten songs since I’ve been in Puerto Rico. I have a whole other album ready. [laughs]

And for someone who maybe hasn’t listened to your music before, how would you describe your sound? Who has influenced you?
I’d say if Bright Eyes and Nick Cave were playing checkers. [laughs] Elliott Smith and Tom Waits have been big influences of mine. Leonard Cohen has been a huge influence to me—I love that man. The National, they’re from near where I grew up in Ohio. Oh, and don’t forget Sparklehorse. And there’s this country-ish vibe, too. I don’t know who did that to me.

Prior to Mongrels, you released two EPs. What was your mindset heading into those first two releases?
I had three full-length albums even before those that I never released. When I started, I just wanted to make music for my friends and my family. I never really thought about going out and doing something with it. With Feed The Flames and Knots, I was just at a point where I knew the direction I was pushing this.

Going into this first full-length can be daunting, and because you’re constantly writing, how did you decide what you wanted the record’s story to be and pick out the few songs to do just that?
It’s difficult because these songs are like a litter of kittens. You don’t want to give them the axe—you love them all, individually, for their own little character and qualities. Specifically for Mongrels, I was going through 50 demos with Tom [Tapley] in the studio, and we were whittling it down. It was a three-tier cut system because it was so hard. Once we had whittled down all the songs that we were thinking of, I went through and listened to them with the mindset of synergizing the project. What story am I telling here, putting them in different orders.

Since it's a somewhat spontaneous process, were there any “happy accidents” that made it on the album—something you weren’t planning that kind of just fell into place while you were working on it?
Plenty of them. This whole project has been subtitled “Happy Accidents.” [laughs] I met the cellist who plays on the record at the airport, right after I got off the phone with my manager saying, “We couldn’t fly your cellist in.” So I was like, “Fuck, I need a cellist.” I go grab a smoothie, and there’s a girl in front of me with a cello. I ask, “What are you doing at the end of the month?” She listened to my stuff, she wanted to play on the record and she did a great job.

Also, “Girl On The Moon,” the second track on the record, was initially more of a bummer. It was more like “Lua,” from Bright Eyes, but we ended up turning it into this ‘60s pop-country, “driving down the Pacific highway” kind of vibe. It turned into more of a hopeful song, and we need some more of those Malarkey songs, to be honest. [laughs] In the studio, I really want musicians to fuck around first. Sometimes I’ll give them a mood—like “just make it more drunken,” you know? Take the edge off it and see what we get. I like the spontaneity and the collaborative nature of making music.

You’re taking this album on the road. How excited are you for people to hear it come to life?
I’m very much looking forward to getting these songs on the road. Music for me is about sharing. It’s about having an experience with people. It started back from being a punk kid and going to those shows, and there’s nothing I love more than being there in that room with people and that whole world falls away and you’re just having that moment. It’s a beautiful thing.

Catch Malarkey on tour this fall, and preorder his album here.

Mongrels will be released Friday, Sept. 8.

What are your thoughts on Mongrels? Let us know in the comments below!