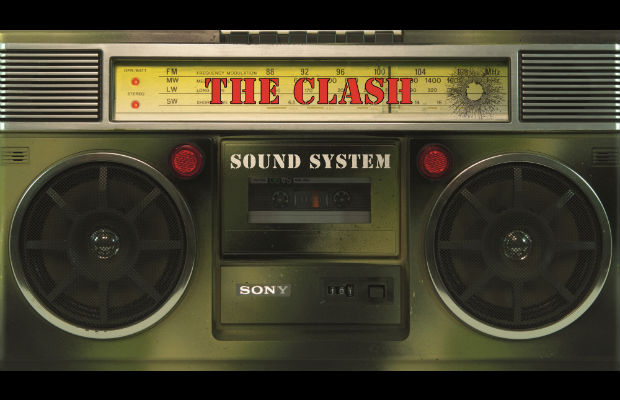 Walking past the unassuming Wallplay gallery last Thursday night in New York City, there was nothing to indicate that the event taking place inside was anything other than one of the typical art openings on the Lower East Side. Walls were simply adorned with black and white photos, music videos flashed across a mounted screen and an intimate crowd milled about, examining the artwork.

So maybe you went on your way, shrugging it off—there are so many of those things, who cares?

We do. ’Cause the photos weren’t just any photos. Curated by Rock Paper Photo, they were rare, classic images by photographers like Pennie Smith, Bob Gruen and Adrian Boot of The Most Important Punk Band Of All Time, the Clash. (Disclaimer: Opinion is mine, but I will fight you if you disagree.)

Upstairs from the gallery, in a small, intimate room, Mick Jones and Paul Simonon of the Clash were situated on a couch, relaxing in dapper suits, complete with tie clips. This isn’t the stuff legends are made of—these are legends, guys who’ve probably influenced just about every single one of your favorite bands—assuming you have good taste in music. And there they were, ready to chat about the recent release of their box set, Sound System, and their DIY ethic.

Sound System is massive in every way, from historical importance, to the content (12 CDs! A DVD! A fanzine! More!), to the packaging (a giant boom box modeled after one of Simonon’s own). The idea was, the bassist jokes, “to construct a box set we could live in.”

“We did the box before we decided what was going in it,” adds Jones.

Every track was chosen by the band, and remastered with longtime engineer Tim Young. It includes the band’s five seminal albums across eight CDs, plus three CDs of demos and non-album B-sides and rarities. “One of the great thrills of the record is hearing stuff you never heard before,” explains Jones.

It’s truly the definitive story of the Clash, the essence of a prolific career spanning nearly 40 years, which almost makes the $177 price tag a bit more palatable. Think of it as a collector’s item. “If anyone wants to know anything about the Clash,” says Simonon, “it’s all in that box set.”

Sound System, deconstructed: Look at everything you get! Including a gigantic cigarette!

Jones and Simonon discuss their diverse influences, from the Rolling Stones and Ennio Morricone to Jamaican music and Lee “Scratch” Perry. Simonon reminisces about going to ska clubs, where “everyone was using the music as a soundtrack to just thump everyone up.” American punk rock was also a huge influence on the band, especially Patti Smith and the Stooges and the “don’t-give-a-shit” attitude of Suicide.

“With the Clash, it was a 24-hour lifestyle. I lived and breathed it off the stage,” Jones says. Regarding their musical output, “We thought it was normal to just work all the time.”

“Stardom meant nothing to us. We were too busy for all that rubbish,” adds Simonon.

Working all the time meant not just creating music, but creating the band’s image, as well. Simonon, whose capsule collaboration The Flash Collection with Sailor Jerry clothing (apt, since he has a Sailor Jerry-styled anchor flash tattooed on his wrist) is released this week, says, “Clothing is very important. It’s [the band’s] whole experience: the world view, the clothing.”

The Flash Collection by Paul Simonon

Back in the ’70s, the London punk scene was small and incestuous. Malcolm McLaren and Vivienne Westwood had opened what would soon become the infamous SEX shop, but was known then as Let It Rock. The Clash’s former manager, Bernard Rhodes, was a close friend of McLaren and Westwood, putting a young Simonon in close proximity to anarchistic fashion. “I’d been a mod; I had an understanding of the power of clothes. If the audience are better dressed than the band, why the hell should they listen to the band?”

The band’s iconic look, immortalized in Kate Simon’s 1977 photo for The Clash, was simple and sincere. “We’d go to a secondhand store, get some straight leg trousers and splash some paint on them.”

While some may cock an eyebrow at the bank-busting Sound System and the Flash Collection, accusing the once anti-corporate, socio-political band of “selling out” a thousand times over (Mark Perry said it first, though, back in 1977: “Punk died the day the Clash signed to CBS”), both are natural extensions of their career. Sound System came about via fan demand; the Flash Collection from Simonon’s love of clothing. Jones, Simonon and the late Joe Strummer never gave a toss about “branding.” What the Clash cared about was music, work ethic, and doing things exactly the way they wanted to do them—which oftentimes winds up to be the most successful, because it’s sincere. Hearing Jones and Simonon reminisce about playing on old bombsites in Europe and the power of Jamaican music, it’s hard to image that the Clash have ever been anything but sincere.

Sound System (Legacy Recordings) is available now. For more info on Sailor Jerry’s The Flash Collection by Paul Simonon, check out the slideshow.

Based on Simonon’s iconic 391 “Lightning” leather jacket by Lewis Leathers. Think of it as a collector’s item, like a famous painting or something. Only 50 were made. Limited-As-Hell Edition leather jacket, $2,300

Now, this you can afford, but act fast—there are only 250 of each, and the labels are hand numbered. Mermaid tee (featuring Simonon’s own design of a mermaid riding a classic Sailor Jerry anchor), $50

In England they call it a neckerchief, and it’s an essential part of Simonon’s wardrobe. Limited edition of 1,000. Hula Girl Bandana, $30