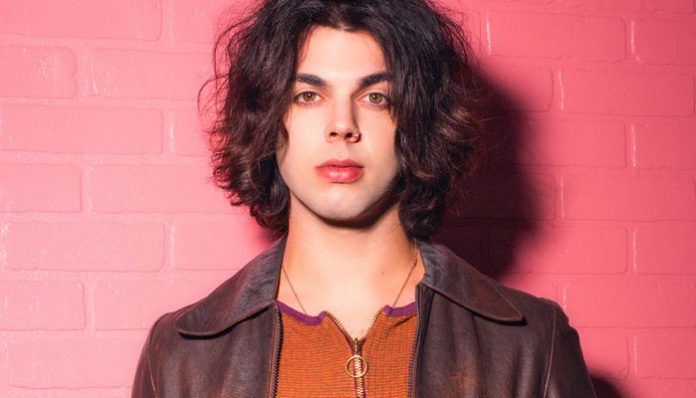 Even if you’ve never listened to a single song of his, you have certainly heard Micky James. He’s got the glam-slam confidence of Bowie. The attitude of the Rolling Stones. The danger of the Clash. A look that’s one part Jack White, one part Gerard Way. In a world of pop and hip-hop, James is the odd man out, but he sounds and looks great doing it. You may see for yourself below, as we’re premiering the video for “Kings” today.

You won’t be seeing James tear up a stage anytime soon. (Go to hell, microbes.) But it hasn’t stopped The New York City rocker from keeping busy and refining his craft. He’s been doing a series of quarantined videos under the banner “Mick At Nite,” where he’s been paying tribute to some old faves. He told us about when he first fell in love with rock ’n’ roll, how “Kings” is political with a small “p” and who he’d book if Mick-chella was a thing.

Your tracks could fill a dance floor and make the walls of a rock club sweat. You have a great knowledge of your rock ‘n’ roll forefathers. What was your gateway drug, so to speak? What was the one song/artist/gig that made your head swivel and decide that this was what you wanted to do with your life?

I feel as a child, I had many musical introduction moments that were quite head-spinning. I think the icing on the cake to me was watching this VHS tape of the Beatles on The Ed Sullivan Show. For myself and for many others, that performance has changed lives.

The hyperproliferation of pop music really feels like the opium of the people. Do you feel like a man out of time in some aspects? As the philosopher Jagger once posited, “What can a poor boy do except to sing for a rock ‘n’ roll band?” But it seems like pop and hip-hop are steering the culture bus exclusively. What’s rock music’s biggest enemy these days?

In some aspects, I can feel a little like the dark horse. But I like just living in my own Micky James world and not really being bothered [by] what or how much people are digesting culturally and musically. I’m totally aware that hip-hop and pop are steering the culture bus. But hasn’t it always? I believe rock ’n’ roll is poised for another renaissance, as it always comes back in waves. I guess the main question that everyone wonders is when will that be?

Maybe rock music’s biggest enemy is itself. To me, rock feels stuck. It feels niche, and it feels repetitive. There is no one taking risks in rock ’n’ roll, no attitude. There are some bands and artists out there that are doing some really cool things with the genre. But I wanna hear something that I haven’t necessarily heard before. That’s what I’m trying to achieve with my music. I wanna take it somewhere new. There is so much happening in the world socially and politically that can add so much fuel to the fire for rock ’n’ roll. I’m excited to see what comes out of all this madness.

“Kings” is a cool six-stringed groove fest with a message. It’s political but not with a capital “P.” Was your intention to get listeners to get over their outrage fatigue and participate in the things that will affect their lives? What was the vibe you were trying to convey?

Absolutely. It was the first song I’ve written that was politically charged. I wasn’t intending to write a political song. It’s just how I was feeling at that moment, and I wanted to get it off my chest. I wrote “Kings” about two or three years ago. It’s depressingly ironic that the message still stands today, that nothing has really changed. But I couldn’t think of a better time to release that song than right now. It’s a crucial time in our country to make a change. Let your voice be your weapon.

The pandemic derailed everyone. Your “Mick At Nite” clips are pretty great. What was supposed to happen this year versus what you’re doing now? What’s on your shortlist of songs to cover?

For myself and for many other musicians, touring was on most of the agenda. It was pretty crushing to know that performing would be off the table for God knows when. That was a real blow. But I think personally, being stuck at home for so much time allowed me to self-reflect on the music and exercise new creative muscles. For instance, “Mick At Nite.” It’s been a ton of fun making those videos, and the reaction has been great. I’m definitely looking to keep the series going, possibly expand on the idea. There is a shortlist of covers that I still wanna take a stab at. Possibly a Dylan song or a David Bowie track.

The Micky James experience looks pretty refreshing. I’m sure you’ve seen all these photos and videos of “socially distanced gigs” that either look awful with the band two miles away from the audience or incredibly unsafe, like bees on top of each other in a hive. Can rock ‘n’ roll survive in a world without close proximity? Are we supposed to wait for a vaccine?

I think for the time being, the socially distanced gigs are great. It certainly helps feed everyone’s desire for live entertainment. However, I don’t think rock ’n’ roll, pop or hip-hop can last in that sort of sterile environment. Live music—especially rock ’n’ roll—is all about the connection with one another. Fortunately, next year is starting to look promising for touring and live entertainment.

Create your own Mick-chella. Four-band show. You’re opening. Pick the other three bands playing. Keep in mind you’re playing first, so you can see the rest of the show without interruption.

After you’re done slotting James between YUNGBLUD and iDKHOW on your playlists, check out “Kings” below.