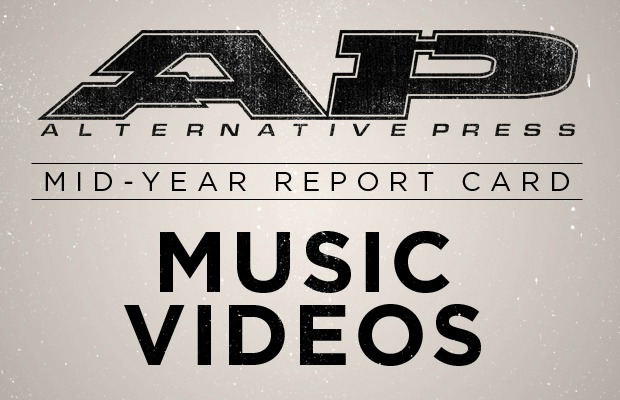 On the third day, AP said, “Let there be music videos.” And so there was, and they were good. Check out our top 10 music videos from the first half of the year below. You can also check out our top albums here and our top songs here and be sure to stick around the rest of the week to see our top live shows and most anticipated albums.

THE BLACK KEYS
“Gold On The Ceiling” (from El Camino )
“Gold On The Ceiling” is less a music video and more a micro documentary of a day in the life of the Black Keys, without all the pretenses that go along with the word “documentary.” For all we know, the band had a friend follow them around with a video camera for a couple days. But its simplicity is what makes it appealing. I’m not a diehard Black Keys fan by any means, but halfway through the video, I’m ready to hang out with the guys and buy them drinks. And by the end of the clip, I can’t get the ridiculously catchy chorus out of my head. Well played, Black Keys. [BM]

FOXY SHAZAM
“I Like It” (from The Church Of Rock And Roll)
“Welcome to the church of rock ’n’ roll,” shouts Foxy Shazam frontman Eric Nally, guns blazing, to open their video for “I Like It.” Spending its time partying in a huge cathedral, the video is filled with bombastic theatrics, women shaking their booties and live shots showcasing how exciting the band can be (though seeing them in the flesh is a whole other-worldy experience I highly recommend). The celebration of a woman’s behind hasn’t been the same since “Baby Got Back,” but “I Like It” may become generation Y’s ass-praising anthem. [MC]

FUTURE OF THE LEFT
“Sheena Is A T-Shirt Salesman” (from The Plot Against Common Sense)
Wales-based wiseguys Future Of The Left celebrate their disdain for music as disposable marketing fodder with this twitchy epilepsy-inducing clip. Pay special attention to the blue men holding suggestive placards and banners that may subliminally (or overtly) suggest you do things with the contents of your wallet you would never ever consider. But more importantly, dig this dollop of jump-cut caffeinated rage, and be forewarned there’s more of this kinda stuff on the Lefties’ new album. [JP]

THE GASLIGHT ANTHEM
“45” (from Handwritten)
When it comes to the Gaslight Anthem, I’m not an objective listener. I tend to think everything the band release is wonderful. From their debut album Sink Or Swim to 2010’s American Slang, the New Jersey quartet stays true to their gritty rock ’n’ roll and punk-rock roots. The video for “45,” the first single from their upcoming album Handwritten, is no different. It’s three-and-a-half minutes of the Gaslight Anthem performing at Jersey’s the Stone Pony. Sure, the video is laced with the occasional dramatic lighting and shots of the band looking pensive. But man, it’s one hell of a show. [BM]