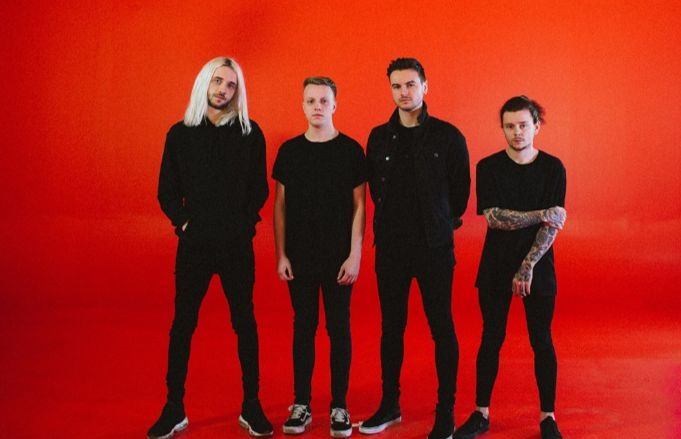 There’s no denying that Milestones have lyrics that pack an emotional punch and stadium-sized hooks that make each track a standout. And with their debut album, Red Lights, the Manchester, U.K. act prove that they’ve pulled from those bands who shaped the scene—Mayday Parade, All Time Low and Boys Like Girls to name a few—but are carving their own path in the pop-punk world.

“We really wanted to write something that had longevity to it,” vocalist Matt Clarke says of Red Lights. “We wanted to make sure it was one we would still like five, 10 years from now.”

“We wanted something that was a throwback to bands 10 or 15 years ago,” guitarist Drew Procter adds. “They’re a lot of the kind of records we were listening to for inspiration. We really focused on having big choruses for this record because we felt like that was the best way of getting the record to that point where people would want to keep on listening to it.”

To channel those influences, the band teamed up with the best—Mayday Parade’s Jake Bundrick, who took on a co-writing role for the first time. The Milestones songwriting duo worked with the Mayday drummer on “Hold On” and “Forever Or Never.” But Bundrick’s influence spans past the two tracks. Beyond the writing, Bundrick knows exactly what Milestones are going through with their debut release.

He knows about those “nightmare co-writing sessions,” what it means to help “guide the ship” and, most importantly, the importance of writing songs they truly love—advice he took away from writing A Lesson In Romantics.

“Over the 12 years of being in Mayday, all the records we’ve done and all the producers we’ve worked with, I’ve tried to soak in any kind of information I can to retain it,” Bundrick says. “I feel like with all that information, I was able to help them with the journey they’re about to partake.”

And it’s that guidance that Milestones most appreciated as they finished out the record.

“It was nice seeing a lot of the parallels with how Mayday felt and how we feel going into our first album,” Clarke explains. “You see these big bands and how amazing careers they’ve had and think, ‘Oh, they’ve never been worried.’”

“It’s nice to be able to sit down with someone and have them tell you, ‘We were scared, too.’ Just as much the musician side, it was just good to talk about things as well. You know, feelings.” [Laughs.]

From life lessons to lyrically-powerful new tracks, Red Lights prove Milestones have the Mayday spirit and the soaring choruses to be the next big alt act.

Stream Red Lights below, and preorder the album here.

Plus, the band will be touring the U.K. in support of the record. Check out their forthcoming tour dates below!