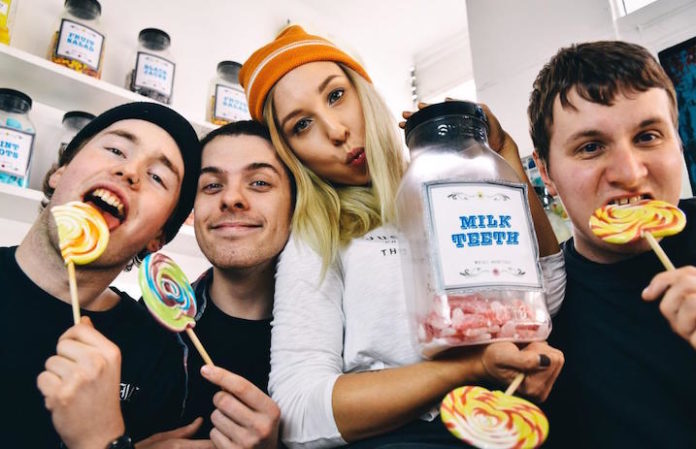 These are just a few of the strong, inspirational and brilliant women who lead some of the most awesome bands in our scene.

While the majority of us giggers are decent and civilized human beings who attend shows to enjoy live music over a few jars with our buddies, sadly there are a minority of people who are intent on intimidating, degrading and humiliating these talented women who take the stage night after night to perform their original and heartfelt material for us.

U.K. pop-punkers Milk Teeth’s frontwoman and bassist, Becky Blomfield, tells us about her experiences with misogyny and sexism on the live circuit—most recently, this very month—and how we all have the responsibility, as a community, to obliterate this vile behavior.

“I didn’t directly hear anything, but our tour manager was in the audience, and this guy didn’t know he worked with us and was nudging him and saying, ‘Oh, I’d fucking love to crack onto her tits,’ and saying all of this really gross stuff, and our tour manager gave him a bit of a row about it,” Blomfield recalls. “We had a good show, and then I got offstage and found out and it put a bit of a dampener on everything because I feel like I’ve worked so hard to be taken seriously. I even wrote an article called ‘More Than Just A Pair of Tits,’ and for somebody to objectify me when I’m up there singing songs that are personal to me and that I’ve put so much work into—I want be seen as credible. It just felt like a massive step backwards.

“If I had heard him, I would have called him out, straight-up,” she continues. “As a band, we’ve always been very against any kind of hate or anything that’s disrespectful to people, whether it’s their gender or their race. That’s not cool with us, and we will say something.”

And this isn’t the first time this has happened to Blomfield.

“One time, we were on a tour and a guy came up and kept edging closer and closer toward the stage when I was playing bass, and I was in the zone, so I had my hair in my face,” she recalls. “I didn’t really notice at the time, but he was basically insinuating oral sex and coming toward me, and I had to get escorted out of the building. It’s disgusting. I don’t understand why. I mean, obviously it does happen to guys, too, but I don’t get why predominantly men feel like it’s okay to act that way toward women. Girls obviously fancy the boys in the band—they think they’re attractive, but girls aren’t making sexual comments; it doesn’t happen as frequently. So I guess it’s not that women are victims, but it seems targeted in a different way.”

So how should we tackle this issue? Draw attention to it, be vocal and call it out, Blomfield says.

“If you keep it quiet and don’t say anything, then it almost lets these people off of the hook,” she says, “and it gives this unknown sense of ‘Oh, we’re brushing it under the carpet, so it’s okay.’ Which it’s not.”

The key is education, Blomfield suggests, to inform people what’s acceptable and what’s inappropriate—help people understand why their behavior is not okay.

“It’s everybody’s responsibility to confront this. Genuinely,” Blomfield says. “We are in a good position because we do have a platform: Twitter. As much as social media can be negative, and there can be a lot of hate on there, it can be used for good, too. It’s just whether people put that out there and try and spread a good message. At the end of the day, that’s all you can do. If they listen or not, it’s up to them, but all you can do is try your best.”

Blomfield says she’s also noticed a lack of monitoring in the music industry—and not knowing who to turn to when you’re in a similar position as Blomfield was.

“If that happened to me in an office job, I’d have a HR or a higher-up person I could go and talk to about it. When it happens in this public sphere, it’s like, who do I go to?!” she asks. “There are no repercussions when people say things. They get away with it because nobody comes down on them like a ton of bricks. Which is why we have to keep calling it out.”

And here’s proof of it. Guitarists Billy Hutton and Chris Webb have taken to Twitter several times to call people out.

Leeds you were super fun but fuck the guy that repeatedly said sexist things from the crowd. You're a piece of shit and not welcome anywhere

If anyone knows who it was name and shame him. Stop people like this going to shows.

For real if you shout anything sexist or misogynistic then you are not welcome. Please delete our music. We don't want you as a fan

London, last night was absolutely mind blowing. Thank you so much for supporting us. It was one of the best shows I've ever played

However, after the show had ended I had found out once again that a guy had said something incredibly disgusting to my girlfriend….:

While she was outside. I'm not going to quote what he said because it angers me every time I think about it. If you're going to come to one

Of our shows (or any shows of that matter) with that attitude towards women (or anyone) don't turn up. Youre a piece of shit and not welcome

To the other 320 odd people in the room. Thank you for looking after each other and having fun.

For those unsure of where to turn, Blomfield suggests Safe Gigs For Women, an initiative that aims to create a safer environment for women at shows by educating concert goers, bands and venues on how to reduce harassment.